As a DevRel specialist, I get a lot of questions on the markup of developers in my region. Luckily, I was able to compile some very interesting statistics in a freelance project. All numbers are publicly available. I compiled them and present them here in a meaningful way. Happy to share the sources with you! 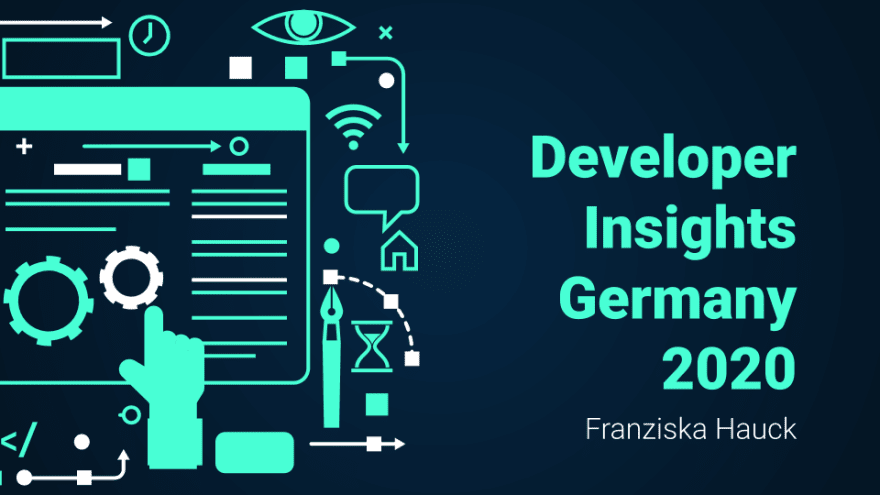 Overall, I looked at the following topics:

Number of IT professionals

One of the first items that come to mind are the overall number of developers. The Federal Agency for Employment calculates that there are just over 1 million IT professionals in Germany. Of those, about 500,000 can be counted as developers. The overwhelming majority works as employees. Only about a fifth of IT workers decide to go freelance. 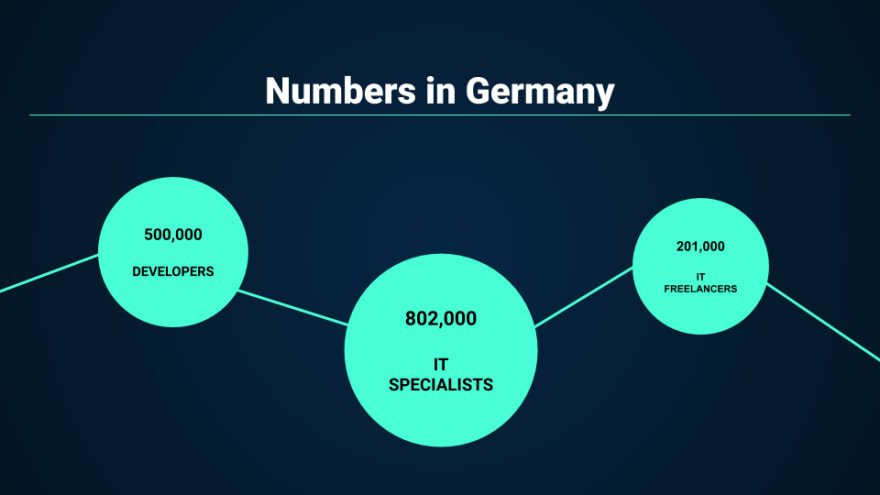 Gender diversity in IT

One of the questions that comes up in my work is the state of gender diversity among tech folks in Germany. And I have to say… it looks pretty bad.

All things considered, we have one of the lower rates of people in IT who identify as female or non-binary. While the most optimistic estimates for university students at the beginning of their course assume 29%, this number drops down to 19% at the end of their studies.

Please note: we are still talking about IT subjects, not computer science specifically. Ultimately, only 16% women and non-binary people actually work in IT.

Education doesn’t prevent from leaving this field. In fact, highly-educated women leave STEM much quicker than women who don’t possess an extensive education, as Ronna Steinberg shows in her talk. We have a lot of work ahead of us. 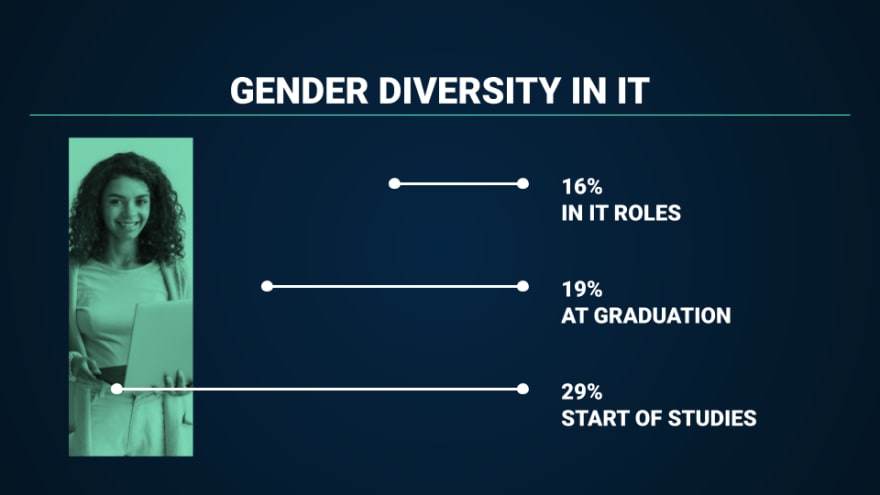 What is interesting also is that the number of open positions has seen a steady rise over the last years. This is both due to the fact that the IT sector is growing in Germany and that more and more roles cannot be filled.

This is partially rooted in German students not saying yes to IT subjects more often. But, as we have seen, the dropout rate is equally to blame.

What happens is that the German job market attracts talent from Europe and beyond to feed its supply. I wonder how the Corona crisis will affect those numbers. The last predictions saw us in dire straits for filling positions in 2021.

With hiring freezes implemented all over, we might actually see the first rise of unemployment of IT personnel in quite a while. 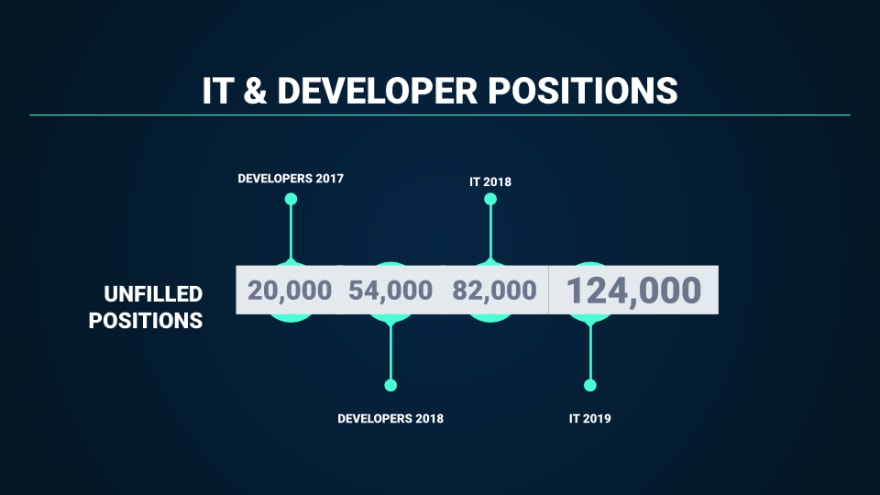 Let’s take a look at the community numbers. Germany is marvellous in the sense that there is so much on offer for the tech community. Whether it’s global access to open source projects or smaller-scale company community programs, there is something for everyone. Not to mention the various initiatives to increase diversity.

For simplicity, I analyzed the overall number of tech giant community groups in the country. Microsoft takes the number one spot. It should be noted that their programs include Office-related groups. In this, it is similar to Salesforce where marketing-focused gatherings are among the various trailblazer groups.

Google, with its GDG and Women Techmakers offers, takes second place. Having had the honor of taking care of that program here in the region, I can qualitatively say that is a great community. Amazon, IBM, Mozilla and Facebook also have their stake in the game. 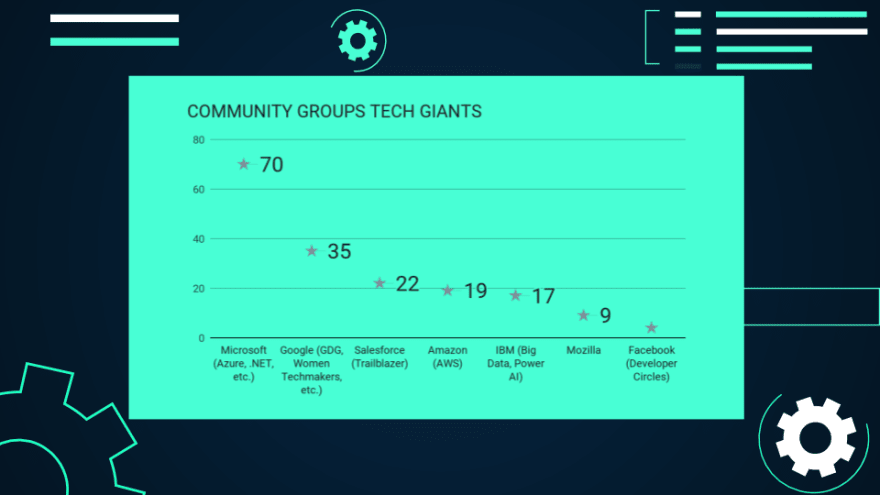 Further up, I talked about lack of diversity. This becomes nowhere more evident than in the ambassador programs. Here, only Google can boast some half-decent representation. Since I am to “blame” partially for the rise of female and non-binary GDEs there, I am happy to have made a change in such a way.

SAP, which has less of an impact in the community sphere than the other players, has actually engaged quite a respected number of so-called “influencers”. It is crucial to note that the programs of Microsoft, SAP and Salesforce equally encompass folks who don’t code on a regular basis. 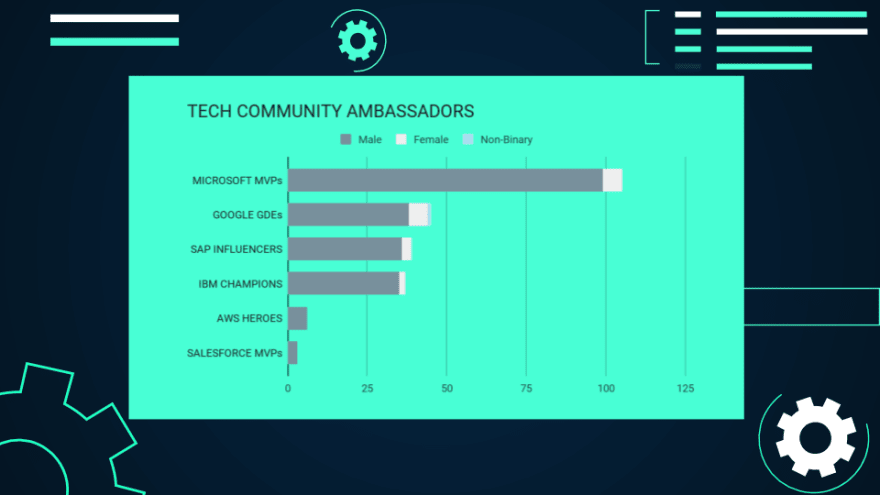 What do you think? Do the numbers surprise you? If not, why did you expect this overview? I am curious about your opinions. Don’t hesitate to comment or reach out to me on LinkedIn or Twitter.

Books On Recruitment To Read

Let Your Code Do the Talking

At the start of your data science career? Need directions?