There are two ways that you can deploy your app,

In this post, I'll show how deploying frontend and backend together. We'll server the frontend from the backend server.
I hope that you have created your Vue app. now create a production build of your app by running,

This will create a production build of your app, that is the dist folder.

Move the dist folder to the root directory. I have also moved the files from the server folder (folder containing files for node.js server) to the root folder. Now the directory structure will look like this. 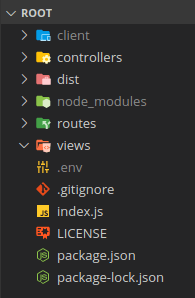 Add the client folder to .gitignore since we are not pushing it to Heroku. If dist folder is added, remove it from .gitignore.

What the above code basically does is that we tell express to serve all static files from the dist directory where our frontend code resides.

In the next line, the server receives the GET request and it will serve the frontend code. since we're using *, express server every GET request with the index.html file from the dist directory. you can also specify a different route for your home or dashboard if you need.

Now our app is ready to be deployed. Make sure you've installed Heroku CLI.

Initialize an empty git repo using git init. (skip this step if its already a git repo). Commit the changes before we can deploy our app to Heroku.

If you are using Heroku CLI first time, log in using heroku login command and enter the credentials.

Now run the below command.

The above command will add a git remote Heroku.

As you can see Heroku deploy the application using a random name. You can change it using below command if you wish to.

This command will update the name of the application to newname.

For pushing the application to Heroku run,

If you have any env variables or config vars (like MongoDB URI or BASE_URL etc) you can add it from the settings section of the app or you can also add it using the CLI.

And that's it. we’ve deployed our application to Heroku. you can view your application running heroku open command or using the "Open app" button in Heroku dashboard.