A component harness is a testing API around an Angular directive or component. Component harnesses can be shared between unit tests, integration tests, and end-to-end tests. They result in less brittle tests as implementation details are hidden from test suites.

As a case study we'll explore the MatButtonHarness introduced in Angular Material version 9.

The component harness for the MatButton directive has these methods:

This covers the most important user interactions and observable traits of a Material Button.

All component harness methods must return a promise. This gives the consumer a consistent API feel, but also lets the harness environment take care of asynchronous events, timers, and change detection. This makes async-await the most convenient statement structure for tests using component harnesses as we'll see later.

The only method here that is out of the ordinary is the host method. It resolves a TestElement. We'll explore test elements in a minute. First, it's important to note that test elements should only be exposed to consumers if it wraps an element that the consumer has created. This is always the case for directives' host elements, so it's valid for MatButtonHarness.

The button harness also has the conventional static with method which accepts an object with harness filters to select the directive in the DOM, we're interested in.

As an example, we can select a button with the text label Sign up as seen in Listing 1.

How do I create a component harness?

The component's UI and interactions can be seen in Figures 1 and 2. 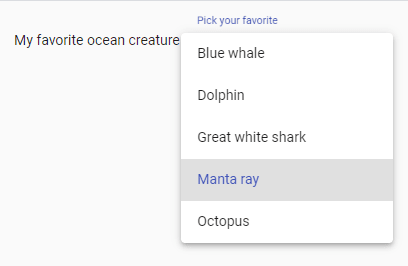 As we'll see when we implement and use the test harness for this component, the implementation details won't matter for the purpose of testing, using a test-as-a-user approach. That is, the shape of the component model, the data binding API, and the DOM structure of the component template are unimportant as we don't directly rely on them in our test cases.

In Listing 2, we create a minimal component harness which extends the ComponentHarness class from @angular/cdk/testing and specifies a CSS selector for a top-level DOM element of the component or it's template. In this case, we're targeting <app-favorite-ocean-creature> elements.

This gives test cases access to the host property which is a promise that resolves to a TestElement.

The TestElement interface holds these methods for interaction with a DOM element:

*ElementDimensions is an interface with number properties top, left, width, and height.

** TestKey is an enum with keycodes for non-text keys such as BACKSPACE, TAB, ENTER, LEFT_ARROW, and F10.

For every element in our component's DOM, we can query for a TestElement. However, we should only expose TestElements to our consumers (test cases or library users) that interact with DOM elements that they are directly controlling such as a component's host element. In this case, that is the <app-favorite-ocean-creature> DOM element which is used and controlled by parent components' templates.

Component harness authoring tip: In general, don't expose TestElements directly. Only do so for DOM elements that consumers control.

The reason for this is that we don't want consumers to depend on our DOM structure which is an implementation detail that they should not have to rely on or even worry about. It's up to us as the owners of components and directives to keep our component harnesses in sync with their corresponding DOM structures.

Let's make the test suite for the component drive the API design of our component harness.

First we want to verify which ocean creature is picked initially. To do that, we need to configure the Angular testing module for a test host component which uses the favourite ocean create component.

Listing 3. Staging a test suite that tests our component using its component harness.

In unit and integration tests, we use TestbedHarnessEnvironment to create a HarnessLoader. The test bed component harness environment support the Karma and Jest test runners, probably also other test runners as long as they support a DOM.

If you're interested in providing support for other end-to-end frameworks, read the official component harness guide's section called "API for harness environment authors". The guide teaches about the requirements for implementing a HarnessEnvironment and a corresponding TestElement which is what enables component harnesses to interact with the DOM as we saw in its API earlier.

Read the full version of the article for free on inDepth.dev to learn about:

This article is produced in collaboration with Systemate A/S in Denmark.

Taking Control of Your Cypress Test Runs With Tags

Fixing Tech Debt is Like Organizing Your Tupperware Drawer