Around 58 BC, Julius Caesar created a substitution cipher. It could encrypt a message by moving each letter by a number. Say I wanted to encrypt my name, Anthony, here's how I would do it

Shift "Anthony" by 2 and the outcome will be "Cpvjqpa"

How the cipher works is simple, move every single letter to a new position. Here's an image explaining what I mean. 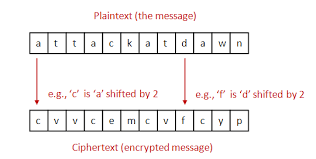 As part of The Odin Project exercise, I was task with completing this challenge and passing all the given tests.


What the code does

So let's break down this code

All this does is lowercase the letters that come after a Letter. For instance:

This code is a mess but fortunately, I had someone on twitter give me some guidance on how I could improve the caesar function.

Not a lot of major changes, but feel free to give me suggestions on what I can change.

Solving problems can be hard but also fun once you get the trick, I spent 2 days on this problem but eventually, I got it and with the help of @TypeEugene (Give him a follow on Twitter ) I was able to clean up some of the code.

Of course, this code is not perfect, I bet you could improve this code with ease, but unfortunately, I don't have good problem-solving skills YET. I know with time I will be able to stare at this code and find multiple ways to improve

Hope this helped you in some way!