Amazon’s Alexa (named after the ancient library of Alexandria) is Amazon’s voice-control system. Alexa’s responsiveness is something that makes it different from the phone-based voice assistant. We can play music, search the Web, create to-do and shopping lists, shop online, get instant weather reports, and control popular smart-home products using nothing but the sound of your voice.

Alexa skill is like an app. You can enable or disable the skill using the Alexa app. Once a skill is enabled, you can launch the skill and do stuff which the skill is capable of performing.

How does Alexa skill work?

Before we start creating our own Alexa skill, it is important for us to understand how does it work. So there are two main components: skill interface and skill service. The request follows the path:

Skill interface is the Alexa dev platform where we create our interaction model. It receives speech as input and provides JSON encoded request. Skill service is the brain of our skill which provides the response according to the request made by the user.

The question that pops into many heads including mine is Why to even build an Alexa skill? There has to be a source of motivation so that we complete what we start (at least for me 😛). There actually is. Amazon has an incentive program where the developers can bring their idea to life using Alexa, publish their skill and at the minimum get a free, limited-edition Alexa developer t-shirt. If more than 150 customers enable and use your skill in the first 30 days of publication, you could also receive an Echo Dot. Motivated? 😄 I am! If you want to get your own Alexa skill published, follow through the rest of the post. I assure you, you can have your skill up and running in like 2 hours. So let’s get started!

In this article, we are going to create an Alexa skill which provides bio and facts on the Marvel superheroes (Superheroes Hub: This is my first skill published so far. If you any of you have echo devices, I request you people to please enable it and check. Please let me know in the comments if you face any difficulties or what more feature you would want in it 👼. You can check the skill in the link).

Now this same code can be extended as well as modified to get your skill.

Go to this link and sign up if you don’t have a developer account already. Follow steps: Alexa -> Create Alexa skills -> Start a skill -> Create skill. Choose a skill name and select Custom.

In the next screen, give invocation name of your skill. This is the name which would be said by the user to invoke your skill. So try to be creative and unique. There are by default some intents included in the list. To get bio and facts of superheroes, we would create 2 more intents: marvelBioand marvelFacts

Click on Add Intent and give name marvelBio. It handles requests made by the user to get a bio on the superhero. 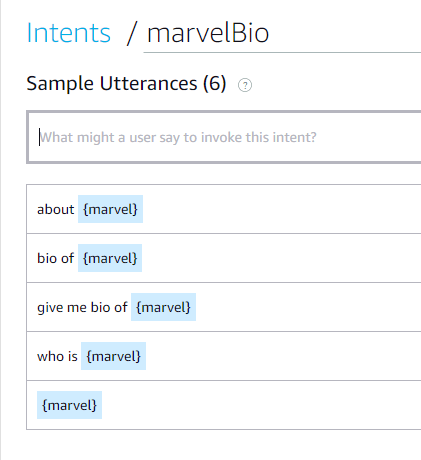 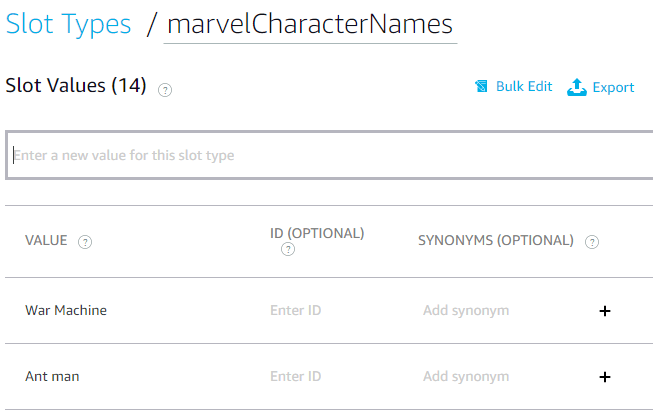 Similarly, add an intent named marvelFacts. Sample utterances will be like: give me a fact on {marvel}. The slot {marvel} for this particular intent is created. However, no new slot type is needed. The same slot type can be used as we want to replace the slot {marvel} by the name of superheroes which we already defined in marvelCharacterNames. 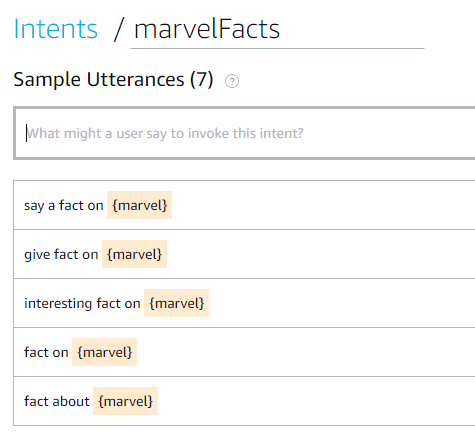 To add built-in intent “AMAZON.NoIntent”, click on Add Intent and use an existing intent from Alexa’s built-in library. Search and select NoIntent. (We are including this intent as you could see by default it is not included in our interaction model). The final list of intents looks like this: 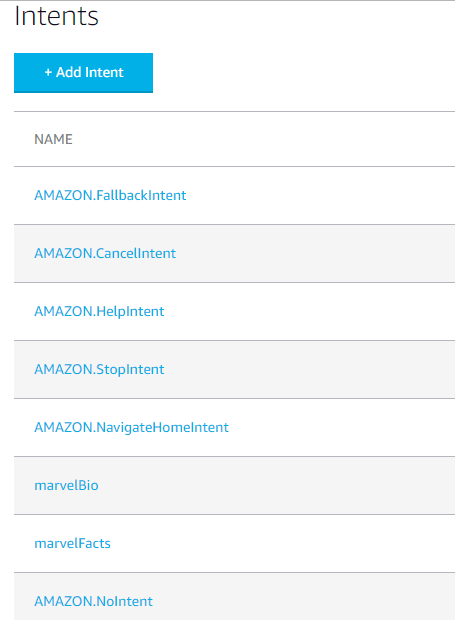 Do Save your interaction model by clicking on Save model. You would not want to do all that again believe me 😟. And check if you can build successfully.

Go to this link. In case you don’t have an account already, sign up and then login. Search Lambda and click on create function and author from scratch. Give the name of the lambda function. Select python 3.6 and role as custom role. 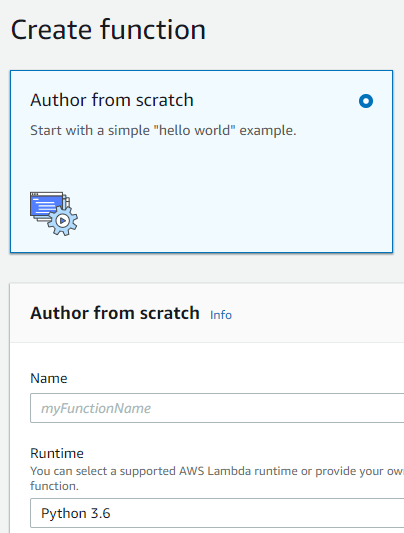 In the IAM manager click on the “Allow” button and you will be redirected back to the “Create function” form.

Click on the Alexa Skills Kit from triggers option on the left side, paste the skill ID you copied from “Endpoints”. Click on Add.

Click on the function name, scroll to the bottom of the page and change the function content. Remove the existing code and paste the below function.

I will talk briefly about what we have done in the code. Initially, in Part 1 we are defining Marvel_LIST(list of superheroes), a Marvel_BIOGRAPHY dictionary with the key as Marvel superhero name and value as his bio and finally a dictionary Marvel_FACT which is a multivalued dictionary with 3 values (3 facts) associated to 1 character.

In Part 2, a lambda_handler function takes event and context as parameter and handles the requests made (Launch, Intent or Session End Requests). LaunchRequest is sent to invoke the skill, IntentRequest is sent when an intent is invoked to handle the event, SessionEndedRequest is sent when the session ends due to an error or user says exit.

In Part 3, request handler functions on_start(), on_launch() and on_end() are defined. output_json_builder_with_reprompt_and_card() is being called from on_launch() function calls which I will be explaining below. In Part 3.1, the intent_scheme(event) calls respective function according to the intents that are being invoked. Example if someone is requesting a fact on a marvel, marvel_fact(event) is called.

The response from Lambda function is a JSON encoded output as follows:

If any part of the code is unclear, you can leave a comment as this would be the brain of your skill. The same code can be tweaked in order to get your own skill.

Please save your lambda function and copy the ARN (Amazon Resource Name) displayed in the upper right corner. Paste this ARN in your Endpoints tab in the “Default region” in Amazon developer Alexa skill portal. Save your Endpoints.

Save your interaction model and build it. Make sure it builds successfully without any errors. This completes the development part of our skill. Time to have some fun! 😄

To test the skill in the simulator, go to the test tab and select Development option from the drop-down. Write down your requests or use your microphone.

In case any of the requests fail and you don’t get the correct response, Alexa developer portal provides an excellent way to debug. Amazon CloudWatch contains the logs with the help of which we can remove the error. Just make sure to put proper log statements in your application as it makes debugging easier.

Before you publish your skill, make sure you have covered all the cases and testing is done. In case it fails the certification process, you can resubmit your skill multiple times, but it is good to at least test the basic cases thoroughly beforehand.

To publish your skill, go to the Distribution tab. Fill in the details like Skill name, description, sample utterances, privacy policy and terms of use. The skill name should be chosen in such a way so that there are no copyright issues (I faced this issue 😝). The description should include everything your skill is capable of doing. Save and continue to move to the next page.

Creating an icon/logo for your skill

Icon creation is one of the fun parts 😛. Usually, people struggle to develop their logo online for free. Alexa portal provides you with one of the most efficient and quick ways for creating your icon. You can use different symbols from the list of symbols available. The size of the symbol can be altered depending upon your need. To make your icon look more beautiful, you can use solid as well as gradient color. Put on your creative hat and have fun 👼. This is the logo which I created for my skill: 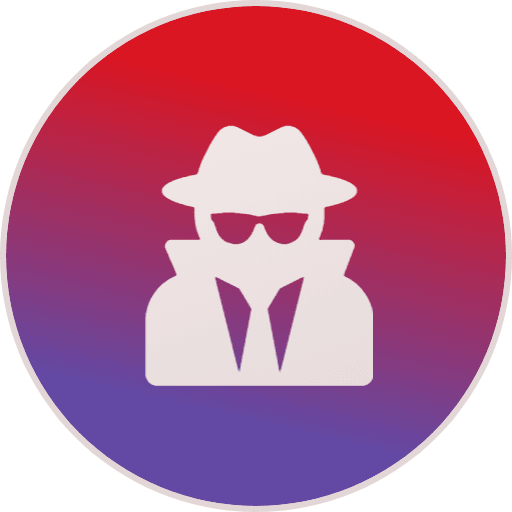 Once you have filled in all the details, the portal runs Validation tests after which you can submit the skill for review. The Amazon team is quite quick and awesome while reviewing it. They send you mail if they find any issues and suggest steps as well how can we remove the error! Once the issues are resolved, you receive a mail saying You Skill is now live! 😄

This was my first attempt to write on something other than machine learning. Do leave a comment if you face any issues. If you liked the article, do show some ❤. Do enable my skill "Superheroes Hub". It is available in India and United States. 150 of you guys can help me get an echo device 😛. Its available here.

Special thanks to the following articles and people:

@anamritraj ’s video tutorial. This series was one of the motivations to build an Alexa skill :)

I am passionate about machine learning

Bringing DEV.TO to Your Blog