User Interface(UI) tests are one of the many kinds of tests carried out by software teams. They are mostly used by UI teams to ensure a product's interface (web or mobile) has the desired functionalities stipulated by the team's requirement specifications.

UI requirement specifications directly affect the application's users and are therefore an important aspect of the software development process.

However, UI testing also presents a couple of problems around their design, development, and execution, which we will be discussing in this article. We will also see some approaches to tackling these problems.

In the previous section, we discussed the importance of UI tests but also noted that these tests often present new challenges.

We will be discussing a few of these challenges below.

These changes are necessary for improving the application and satisfying business requirements but can be tedious for software engineers who create UI tests. They have to keep up with the constantly changing climate of today's user interfaces.

Today's user interfaces have gotten really complex due to the frameworks on which they are built.

They also consist of several web components that range from maps, animated charts, etc., to buttons and textual elements. These all contribute to the difficulties associated with UI testing.

Common in teams with manual testing processes, this results in a lot of time spent on designing test cases and not much thought given to a robust error handling process.

UI Tests Can Be Time-Consuming

The processes involved in creating quality UI test scripts can be quite elaborate and also involve quality time, especially when the wrong tools are in use.

Delayed UI tests often result in a delayed software development process. This may force the software team into making drastic decisions concerning the inclusion of UI tests in their development flow.

How to Solve UI Testing Problems

In the previous section, we looked at some challenges associated with UI testing. Here, we seek solutions to those challenges.

However, key characteristics of a great automation tool include record/playback abilities, support for reusable tests, minimal maintenance, easy integration with existing development flow, among others.

One such automation tool is Testcraft, an AI-based tool that allows software testers to easily automate various test scenarios to boost productivity. 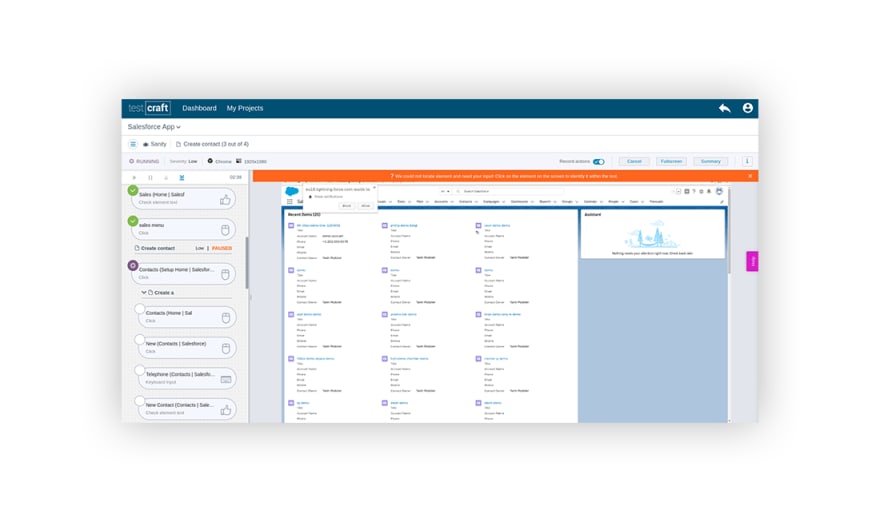 It enables software teams to save time previously used in making repetitive changes to test code for other aspects of the software development process while automating the test creation and execution. This is facilitated by its machine learning algorithms. Detailed reports are also presented as screenshots and videos of what needs to be fixed.

Other noteworthy features include its smooth integration with CI/CD tools which improves integration with a team's existing software delivery flow, and interactive UI elements which make the maintenance process easier.

Other pragmatic tips necessary for solving UI testing problems include the following:

We have looked at the major problems that surround UI testing and a couple of ways to tackle them.

UI tests are a great way to ensure that an application's users aren't disappointed with the features and performances of the interface they interact with. It also gives the teams behind a software assurance of the product's ability and performance.

These UI tests could be carried out in a painless way which greatly contributes to the developer's productivity and confidence in the performance of a product.