This is my experience and my opinion. In this piece I will discuss how I got from A-B and the experiences that led me there. There's nothing wrong with the hot loading tools that are out there and many people have done great work on them, respect. They're exceptional tools for certain workflows.

If you love hot loaders and they meet all your needs, fantastic! You can save yourself 7 minutes of reading. You are also, however, free to do whatever you want and execute your agency as you see fit.

Hotloading is a part of many local development and testing strategies for FE web dev presently. The gist is this:

This description glosses over some icebergs, but is accurate enough for our purposes as this isn't a treatise on the subject. The angular flavor of this is the angular-cli feature ng serve. If you want to learn more, your local lib has an .md file on this you can browse at your leisure.

How the sausage is served

Rather than yet another recitation of the angular docs (YARD), I'm just going to discuss the high point of what led me to basically give up on the above topic:

The domain is the problem

That's a nice operational state you have there. Be a shame if somebody...

More often than not, when hotloading code of any significant complexity, the present state of an application is either not amenable to patching in a hot context, or the application configuration/bootstrap/dependencies will result in an invalid state that is impossible in production or on any system not running under a hotload configuration. Such is the case as an abstract for many hotloading scenarios.

Are you going to eat that?

The second scenario that routinely burns me is when I'm inspecting the final output of my code in the UI or debugging: modify some small amount of code and BOOM, page refresh (or some surreptitious portion of my code changed behind the scenes, which isn't really any better). It's at best jarring, and very likely maddening as you not only lose the debug context, but possibly also a carefully constructed edge case you were testing that may or may not be easy to get back to.

Certainly, this is in no small part due to the fact I adore the autosave features in tools like Webstorm/IntelliJ. I do however value that feature over prognosticative reloading.

"You could have easily solved this problem by compiling from source and writing your own drivers" - The Honorable John Q. Neckbeard, Esq., CCNA

In Angular, the configurations out of the box are generally good. There's also cli configuration overrides that you can use to configure the behavior ad hoc:

As well as angular.json which you can change to further modify both default and some degree of additional behaviors. And then there's lower level changes you can make in the dependent configuration if you want to live dangerously.

Understanding, of course, all of that amounts to a fair amount of effort and mental overhead, of the variety that will need to be replicated across your team to be useful.

Time to pretend; your variance will be in mileage

All of this boils down to time. Time spent second guessing your tools, time spent mucking with configuration, time spent doing things other than producing product. Your experience will likely be based on what you do; designers and testers will be more likely to find the feature useful than people writing plumbing and structural code.

The problem for me isn't that the functionality doesn't work. It objectively does things I don't need it to do. It does too much, and too much is the default. Anything less is work. That is the problem:

The tool, it does too much.

When I look at my workflow and see what I actually need, I'm left with the following:

The reality is what I need is software that will serve my resources on demand. And nothing else. Now as to the how:

WARNING: The following is only useful if:

In the realm of interthings, there exists two classes of tools that can be used for this with relative ease:

For the purposes of this example I'm going to use a proxy, and specifically charles, because I'm on a mac this morning and setting up nginx can be a PITA. Please note that I am not being paid by the guy/gals/elves that make charles, but am not above accepting kickbacks if this generates sales. Also, note that you can do this free with nginx as configuration, in addition to easy and free on Windows. #MacTax #FinishFiddlerForMacTelerik
Charles the Proxy

The architectural process we're looking for basically works like this: 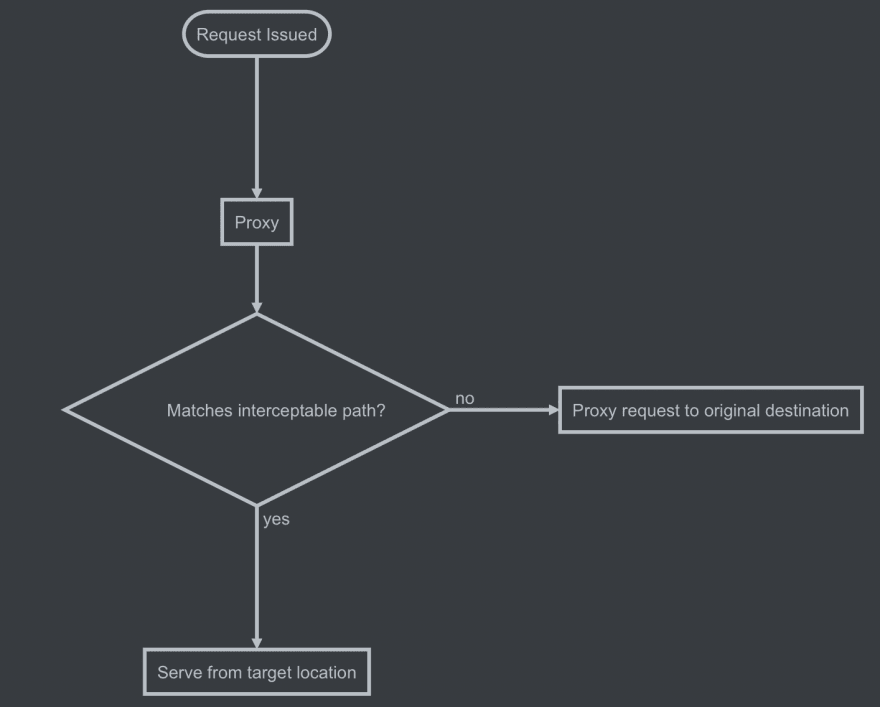 To accomplish this we're going to use a feature called map local. Map local has docs, which you can read. The short of it is you provide a request configuration and tell it what you want served when that wild request appears, EZPZ.

Start by building your application using ng build --watch (gulp/npm/whatever you do as long as it produces an output folder you can serve):

Next we'll add configuration that points at that location and targets our local env: 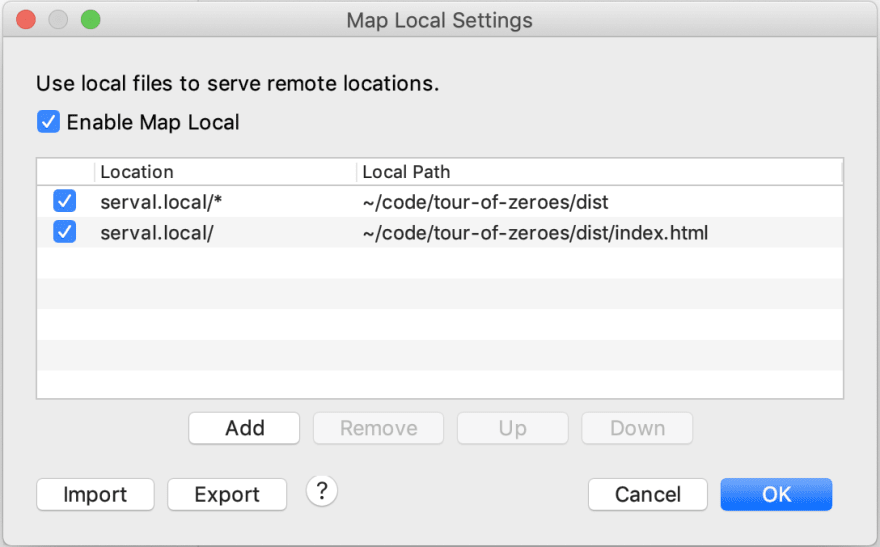 The configuration above creates what amounts to a DNS bind on serval.local. It could just as easily be google, or any other domain. We'll talk about why that is useful in a second.

The first configuration value uses /* to map all path entries to the dist folder for our tour of zeroes application. The second, ensures that a call to the domain directly will return the index.html file. This could just as easily be used for namespacing, example if we wanted to locate our local instance at serval.local/toz/, it's as simple as adding that to the path.

What did we accomplish?

At this point we have a local "server" running which is aware of our application's dist folder and can intercept calls to known domains, replying with local assets. We have full control over refreshes, so our debug context is protected.

The thing that keeps on giving

So, that's cool, now we have a simple, persistent way to serve our content that isn't part of the build pipeline and is pretty easy to set up. But what else can we do with this?

Those of you who were paying attention might have noticed the following text:

and can intercept calls to known domains, replying with local assets

Yes indeed. Not only ficitious domains and local domains, but also REMOTE domains. Tell me, my dear coder, do you often find yourself deploying console.debug output or log instrumentation to non-local environments just to figure out what is going on? Well, with this method, you have a genuine bona-fide electrified six-car method for safely running debug code in any environment, including production. Provided, of course, that code isn't dynamically generated on a server in a way that can't be easily emulated. But that's why we're doing SPAs and PWAs in the first place, isn't it? This is where that whole separation of concerns rubber hits the real-world pavement.

Let's set up an example, my fictitious org has the following domain composition for simple CI/CD:

Let's set up some config rules to represent our environmental overrides, which we will leave disabled for the time being: 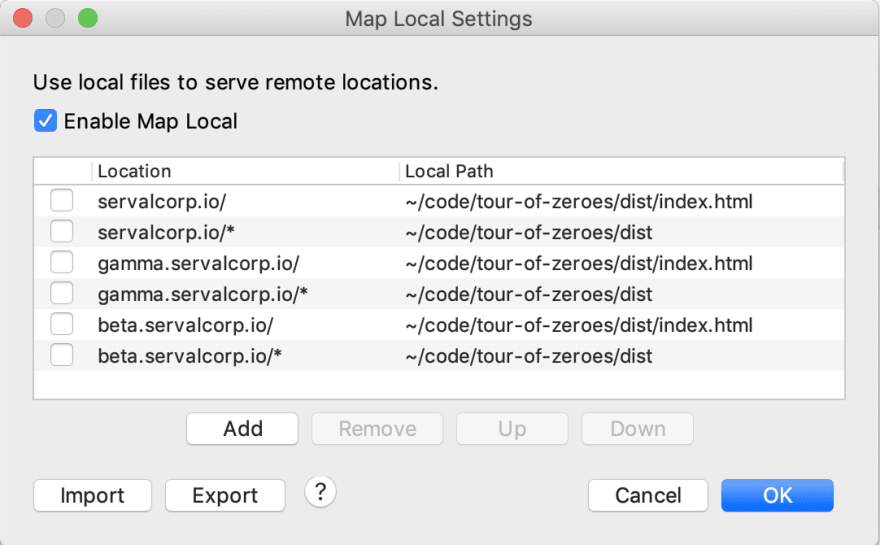 Now, as if by magic, we have the debuggable source we want to see: 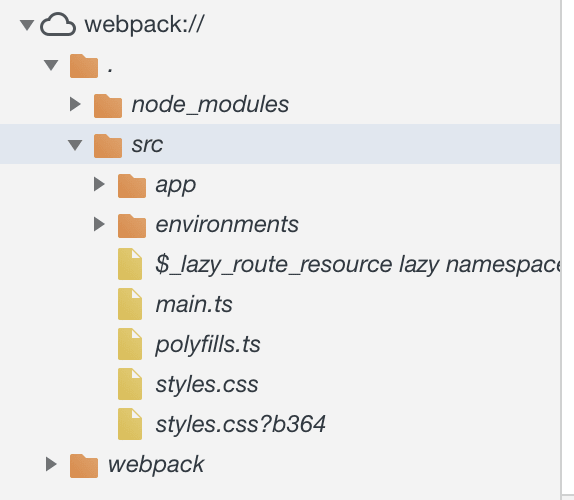 What about API calls? We can apply the same pattern for this too (configuration varies by platform). This is useful for not only mocking out data, dealing with services that are faulting, staging E2E tests (nginx recommended here) and generally dealing with network issues altogether. It's as simple as stage your payload, configure your mapping entries and call it a day.

Use your imagination! And, failing that, borrow someone else's.

This is mostly representative of the mental journey I took to get where I am. Around and around, beating my head against a wall, realizing I could go around the wall, and actually ending up someplace better by merit of it. I think hotloading frameworks have their place, just not in my development process.

Mistery revealed about delegatecall in Solidity

Sneaker Proxy: What Is It and How Does It Work?

7 ways to avoid getting blocked or blacklisted when Web scraping

Once suspended, asparallel will not be able to comment or publish posts until their suspension is removed.

Once unsuspended, asparallel will be able to comment and publish posts again.

Once unpublished, all posts by asparallel will become hidden and only accessible to themselves.

If asparallel is not suspended, they can still re-publish their posts from their dashboard.

Once unpublished, this post will become invisible to the public and only accessible to AsParallel.

Thanks for keeping DEV Community 👩‍💻👨‍💻 safe. Here is what you can do to flag asparallel:

Unflagging asparallel will restore default visibility to their posts.