The Mastodon social network has been steadily gaining popularity over the last several years. One of the main reasons for this is that Mastodon is a decentralised social network, which means that it doesn't have a central authority or corporation that governs how you use it. When you signup on a Mastodon "instance", you become part of your own little community with its own rules and code of conduct, and many such instances connect to form a larger Mastodon network. There are instances devoted to technology, arts and sciences, gaming, and even cat memes, and all of these connect with each other and become part of a larger whole.

This open, community-centric approach means that you can belong to the community where you feel most comfortable, and still interact with the rest of the world from the comfort and security of your own instance. Add to this the fact that each instance is managed by a human administrator that you can reach whenever you want, Mastodon is now what social networks were supposed to be from the start: "social" "networks".

A "bot" is very simple a script that runs automatically and performs a particular task. For example, a simple script could monitor an account on twitter and repost new tweets on Mastodon, or it could watch our favourite websites and post content to our instance whenever they have new content. These are just two examples of how we can use the API to make our community richer and more exciting 🙂.

The goal we want to achieve is this: we want to create a Python script that will run as a scheduled job, get any new tweets the above account posts, and then post them to a Mastodon instance of our choice. This task would require the following:

This simple 3-step process will allow use to build our twitter relay. I'll be using Python 3 to write the script, but you can use any other programming language that you like. I'll add some links to other SDKs at the bottom of these notes.

First things first, we'll need a new Mastodon account for our bot. We could just use our personal account for this, but creating a separate account for the bot has some advantages:

Once the account is created, it's time to customise it. We want to make our bot's profile look like the profile for the twitter account, so that fans of the original can find it more easily. This means updating the profile photo and bio of our bot account to match the twitter account. We also want to identify our bot more clearly so that people know they're not talking to a real person.

Let's update our bot account's preferences with the following:

Once this is done, hit save, and behold the face of your new bot. Here's what mine looks like: 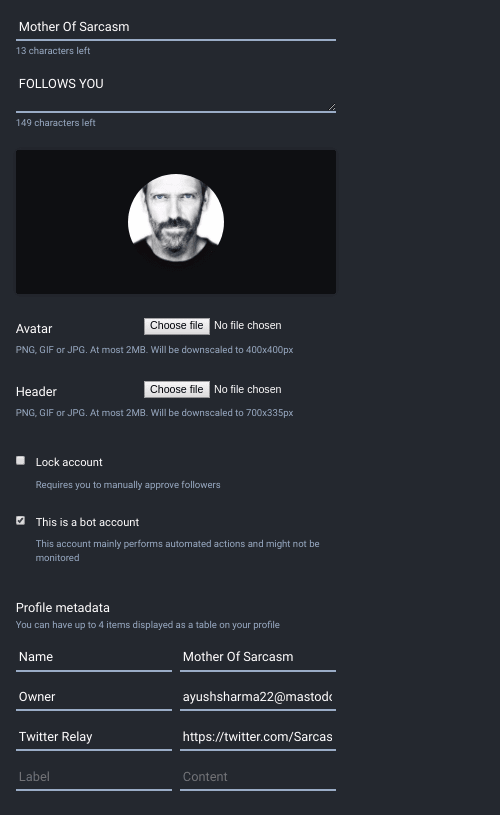 With the profile customised, we now want to configure the access tokens for this account so we can access it from our Python script. To do this, we'll need to create an Application for our new account. 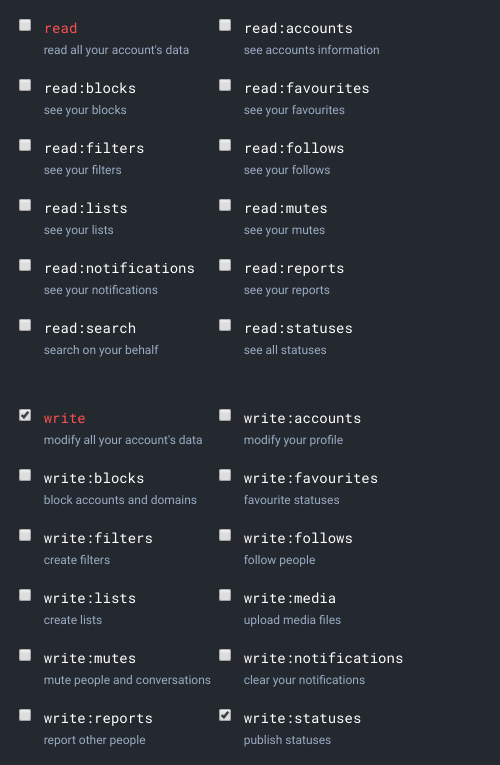 Once the Application is created, we'll be provided with access tokens that we can use to create our bot. 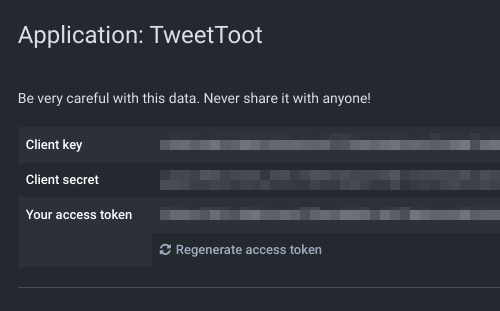 Please heed the warning: `Be very careful with this data. Never share it with anyone!". If the credentials are compromised, anyone will be able to toot from this account. That is why its important that this application only have the minimum permissions it requires to operate.

Back on the Development screen, our new application will look like this: 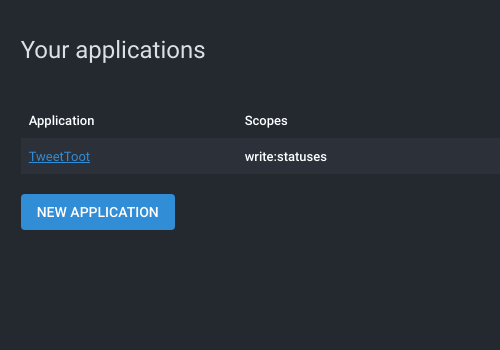 I've uploaded the complete working code for this bot on GitHub. I'll review the important sections here so you can reproduce it.

As I mentioned earlier, I've used Python 3 to build this bot. The two libraries we'll need are beautifulsoup4 and requests. We can install these using:

With the requirements installed, we can add the two important functions our bot will need: fetching new tweets from twitter, and posting the new ones to Mastodon.

Twitter has been cracking down on its API over the last few years to shutdown third-party clients, which means that we'll need to scrape the twitter account page directly and extract the tweets from the HTML source itself. I should warn you that scraping is illegal, and you should find more legal alternatives if you can. For now I'm going to demonstrate the scraping option. To scrape the Mother of Sarcasm account and extract the tweets in Python 3, we would create a function like this:

Here's what the above function is doing:

The above function will give us a Python list, where each item is itself a dictionary containing the unique ID of that tweet and the tweet content. The tweet ID is important because we're going to use it to check if we've already sent this tweet before, and if so, we'll ignore the tweet and move on to the next one.

The function to take a dictionary item returned in getTweets() above and then post it to Mastodon would look like this:

We're setting the access token we received earlier in the Authorization: Bearer token so that our Mastodon instance knows who we are.
We set the content and visibility in the parameters for our POST request.
We POST the request to the API endpoint of our chosen instance.

Running this code should give is a HTTP 200 response, meaning that everything went fine. The instance API will return some helpful response messages to let us know what happened, and we should be able to see our tweet on the bot's profile page.

The full, working code for this bot can be found on GitHub.

Getting Tweet-Toot working is pretty easy. Before you can install it, you're going to need to do the following:

Once this is all setup, you can run the bot like this:

If all goes well, you'll see something like this:

With out bot working, there are a few things we need to talk about before we can deploy this bot to production.

Since our bot is going to be running as a cron job, it will pick up the same set of tweets a number of times from the twitter account until it finds new content. This means that we need a way to check if we've tooted a tweet to Mastodon already, otherwise we'll end up posting every tweet to our Mastodon instance and toot-blast the server.

There are two things we can do: we can add a check in our script to ensure we only post a tweet once, and we can leverage a server-side Mastodon feature to ensure the same thing.

If you look at the tootTheTweet() method in the social.py file on the GitHub repo, you'll see the following code:

If you look at the function lines above, we've implemented a check as follows:

Create a new file path by appending the tweet ID to any directory, say the /tmp directory.
Check if this file already exists. If it does, we've posted this tweet before, and we need to stop posting this one again.
If the file does not exist, create this file but continue posting the tweet. The next time this function executes, its going to find our check file and not tweet again.

If you look at the logs I posted above, you'll notice two lines:

These lines are the output of the duplicate check we placed. Those two tweets were posted earlier, their check files were created, and so they weren't posted again.

This is a very simple mechanism we can implement within our script to ensure we don't post duplicate tweets.

Mastodon's API also implements an idempotence check. The way it works is as follows: we add an Idempotency-Key header with a random value to every request we send. If we send another with the same value for that header, the request is rejected by Mastodon. So how can we use this to prevent duplicate toots?

In our tootTheTweet() function, let's add one line:

This line will now send the tweet ID we extracted as the idempotence header value for this request. In the event our manual duplicate checking function fails, we'll send the request for a duplicate toot with the same tweet ID as the original, which will cause the Mastodon API to reject it. This is a more reliable way to ensure duplicate toots don't end up on Mastodon, but we should first try to remove duplicates ourselves rather than thrash the server and have it do our homework. This feature is easy to check: during testing, just remove manual file check and run your script multiple times. You'll notice that only new toots end up on your bot's profile.

So by implementing both these mechanisms, we can have our scripts check for duplicates and have the Mastodon API provide a strong failsafe as an idempotence check.

This has been a long note, but by now your bot must be happily tooting 🎉. Just a few closing thoughts to keep in mind:

The script is designed to toot once per invokation. I recommend timing your cron jobs according to the post frequency that you need instead of modifying the code, but I've open-sourced the bot for a reason.
Mastodon instance admins are people too. Don't toot-blast your instance and make life harder for them.
When configuring your bot, ensure you clearly display an account where you can be reached in case of issues.
When in doubt about some new code your write, have your code fail or exit() first instead of doing something wrong.

I am a software architect, technical blogger, and fiction writer. I help companies speak Cloud.

Python: Pros and Cons of Lambda

Michael Kennedy almost learned Python in the 90s... and other things I learned recording his DevJourney

How to Use UUID as a Primary ID in Django Models