How to deal with Vue.js routes and lazy load

Hi! My name is Jorge Baumann and I welcome you to this new vue article 🖖💚.

In this tip, I would like to share how I usually work when I have to deal with routes and lazy load.

Most probably, you are used to see Vue routes like this:

Or maybe this way, with the routes loaded asynchronously and specified chunk name:

This way it's really ok and it has nothing wrong. However, for most cases, I prefer to use a different system instead of using the "normal" approximation.

As you can see, there are some repetitive patterns. Since you are an awesome developer, you can use an array with the route options and then iterate with a map() function to avoid doing repetitive tasks.

We have reduced the use of the component key by using the route name as param in the import function.

But.. what happens if you want set the chunk name?
I'm not a scientist, but as far as my knowledge reaches, you can't have dynamic comments in javascript. So, we are sacrificing comments (webpackChunkName) in favor of having to write less code. It's up to you.

Joke. Webpack to the rescue! As of webpack 2.6.0 , the placeholders [index] and [request] are supported, meaning you can set the name of the generated chunk thus:

👌 Very nice! Now you have all the power, dynamically loaded routes with named chunks. You can check it out by running npm run build in your terminal: 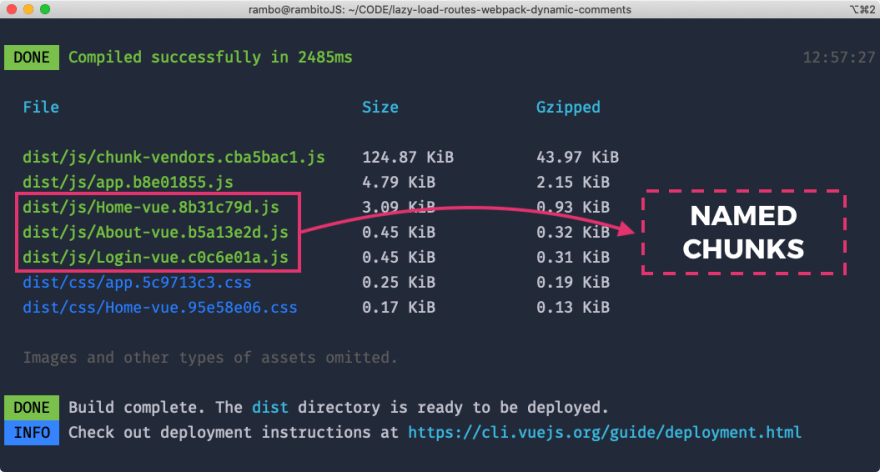 As you see, it's extremely easy implement this in your vue.js applications. Now it's your turn. Start to improve your router.js file by using this awesome tip.

That's all. Thanks for reading. Share it if you liked it. And Alex, thank you for letting me write my first Vue tip. 🤘

Node.js Certification: My Experience and Advice

🦕Deno the Node replacement? Bonus: I created a boilerplate for Deno

20 Awe-Inspiring Codepen Examples You Can Learn From