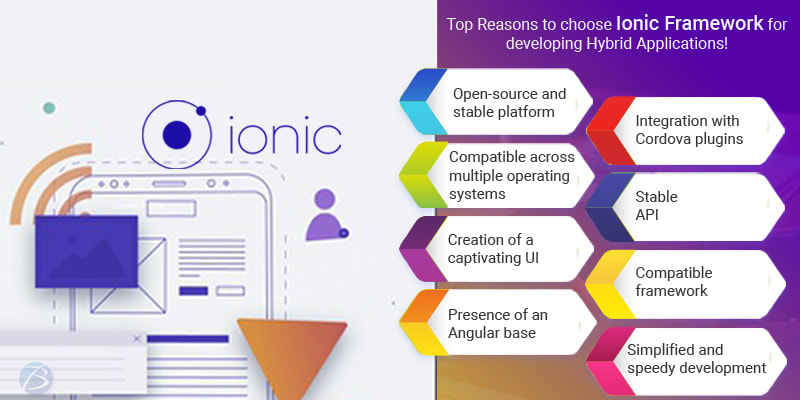 Modern-day businesses prefer developing Hybrid applications as they turn out to be highly profitable. One of the framework that is considered to be best suited for Hybrid app development is Ionic. This cutting edge technology has gained a lot of traction amongst the community of software professionals. Yet, the question that baffles entrepreneurs thriving hard to pick the appropriate technology stack for their next project is, “What framework to choose for Hybrid App Development?".

My write-up will answer this commonly asked question by providing insights on the advantages of one of the good frameworks. The good framework that we vouch on is the Ionic framework and here we provide the reasons why an Ionic App Development Company fares equally better for architecting Hybrid apps when compared to companies using other frameworks. But, before we embark on the journey to explore its potential, let me brief you about this cutting-edge technology.

Ionic, an open-source SDK, was coined by Drifty Co. and underwent several rounds of enhancement ever since its launch in 2013. It amalgamates JavaScript, HTML, and CSS technologies and can be easily integrated with other libraries and frameworks whenever required.

Now let’s move on to explore its benefits

Picking this outstanding framework for your next project will be a smart move indeed. The reasons are listed below.

Ionic has refuted the existing myth that open-sourced platforms are unstable. The robust Command Line Interface, availability of UI components, animations, layout, etc. and community support make it as stable as a paid framework. An Ionic Development Company can reap the benefits of this open-source platform and at the same time can be assured of its stability.

App development is profitable only if you develop an app that is compatible across multiple operating systems like iOS, Android, Windows, etc. Ionic is one such framework that facilitates multiple platform compatibility. In other words, a single code can be reused through various platforms. The reason is the language used by Ionic enables the application to easily switch between different OS. Choosing a Hybrid language over a Native one eliminates the need of learning different platform-specific languages and so ensures a faster and budget-friendly development.

Creation of a captivating UI

Ionic provides an ideal eco-system for creating visually attractive user interfaces and imparts an enriching user experience which proves to be a winning strategy to retain customers. The JavaScript and CSS features of Angular enable developers to customize an application with various colors, menus, buttons, and schemes. These themes can be changed automatically as per the requirement of different platforms while being launched, by employing derivatives and UI components. Furthermore, it supports Right to Left languages like Urdu, Hebrew, Arabic, etc. The high-grade UI makes the app more responsive.

Presence of an Angular base

The Ionic framework is built on top of the ingenious framework Angular. Angular is well-known for its avant-garde features like two-way data binding, usage of directives, and the ability to extend to the syntax of HTML. Consequently, the integration of these two compatible frameworks works wonders in the realm of Hybrid app development. The developers combine the best of both worlds to create dynamic applications that impart a native-like feel. Also, these apps do not face any roadblock while being launched in app stores.

One of the most notable features of Ionic is its integration with Cordova plugins. These plugins enable Ionic to easily access and leverage device features such as speakers, geo-location, battery, logs, camera, etc. There are wrappers available from this plugin for many other native features too. This boosts the app’s performance without the need for complicated coding and also facilitates testing. Ionic app developers who are well versed in native can even create Cordova plugins as per the project requirement.

Reliable technologies like HTML, JavaScript, CSS, and modern APIs like DOM and custom elements. Due to the stable APIs that the Ionic component provides, it facilitates running these apps on more than one platform.

Earlier releases of Ionic were coupled to Angular but the recent version was restructured to work as an independent web component library. The Latest frameworks can also be used in some of the frontend frameworks like Vue.js and React.js.

The aforesaid advantages lead to the creation of rich hybrid applications, in a budget-friendly manner. What more can businesses ask for? Hence, opting for Ionic development is a smart move to gain a competitive edge over peers.

Helpful to share and learn during these unprecedented times