As soon as I received my Macbook at the new job, it was go time.

I had done some research on Xamarin Forms, and decided I would bring in Prism (and utilize Unity for IOC / DI). I looked at a few different Mvvm projects - MvvmLight, FreshMvvm, Mvvm Cross, just to name a few. Be sure to check them out if Prism doesn’t suite your needs. I ultimately chose Prism for background / history, longevity, and activity of the project. To be fair, the other projects would have likely solved my problem just as well, but since I was fairly unfamiliar with all of these technologies, I simply had to choose and move on. At some point, I’d love to revisit each of them individually.

First, why did I have to make all these changes in the first place? In my research of Prism, there appears to have been - at some point - a Visual Studio extension that comes with Prism project templates, but I kept seeing issue after issue about the extension and its integration with Visual Studio for Mac (which I had to use on this project). Since I couldn’t rely on the templates, I had to go about it the old fashioned way - trial and error and google.

The first thing we need to do is create a new Xamarin.Forms project. There isn’t anything terribly special about this, but I took some screenshots, just in case:

| From the next dialog, let’s choose a new Xamarin Forms, “Blank Forms App” under the Multiplatform | App category: | 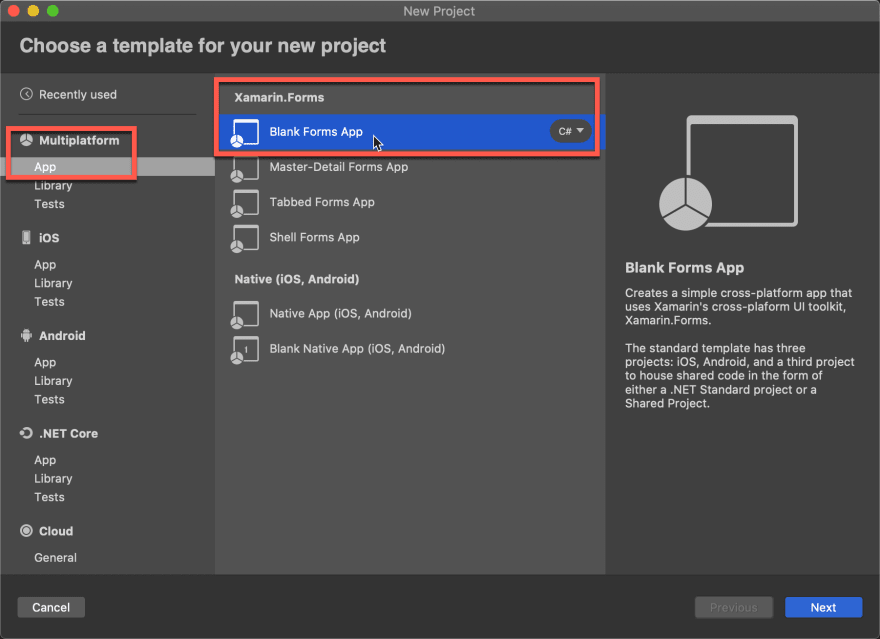 On the next dialog, give your app a name, identifier, and choose your target platforms. For the sake of this article, we’re selecting both Android and iOS. We’re also going to use .NET Standard for our Shared library / code. 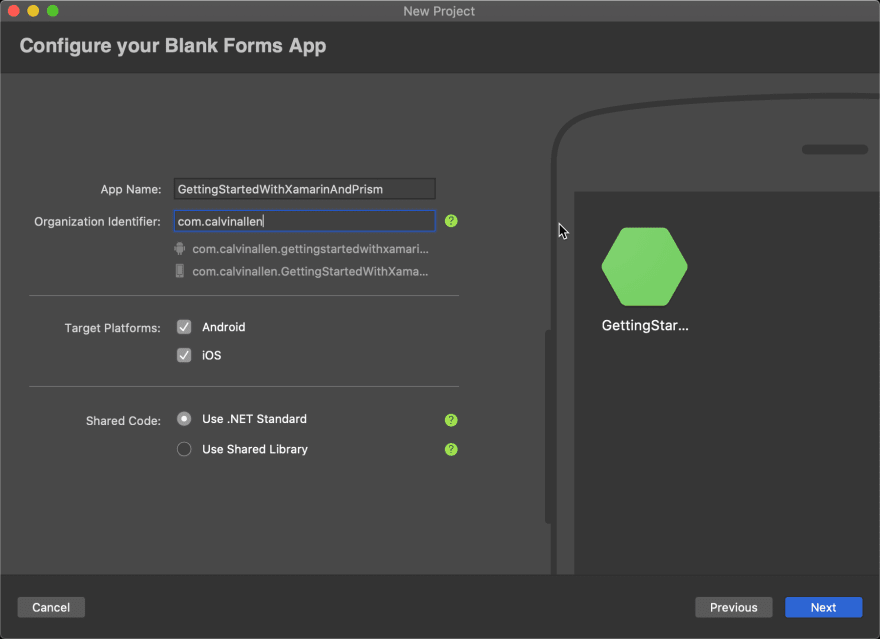 On the final dialog of the wizard, give your project and solution a name, where to save it on disk, and whether you would like a UI Test project or not (for the sake of this article, no test project). Lastly, hit that Create button. 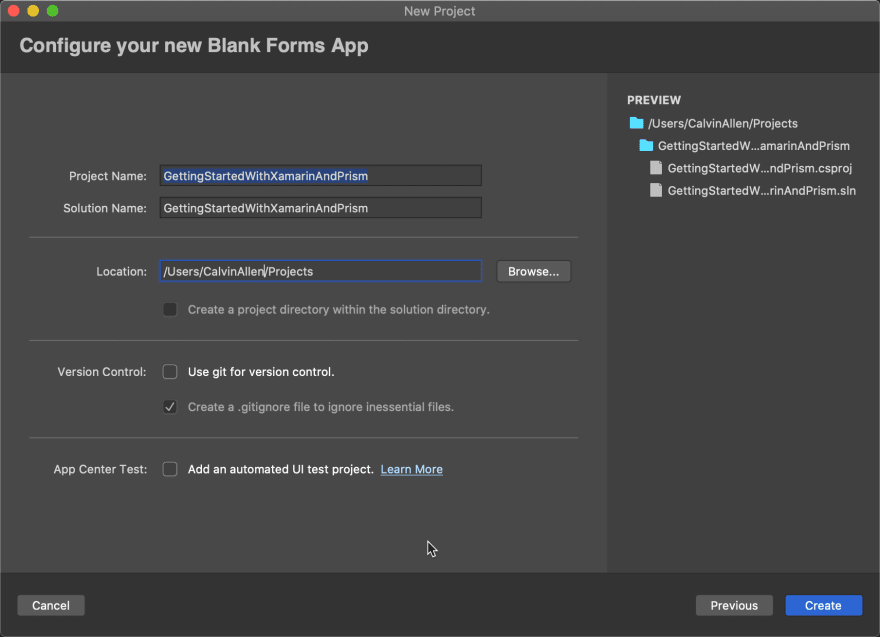 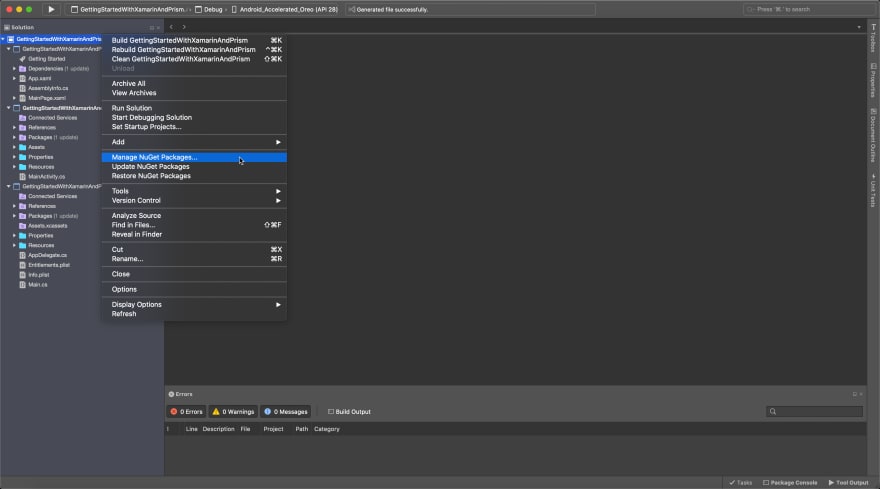 Perform a search for prism, and select the Prism.Forms and Prism.Unity.Forms packages, and click “Add Packages”. This will bring in a number of additional packages based on the Dependencies required. 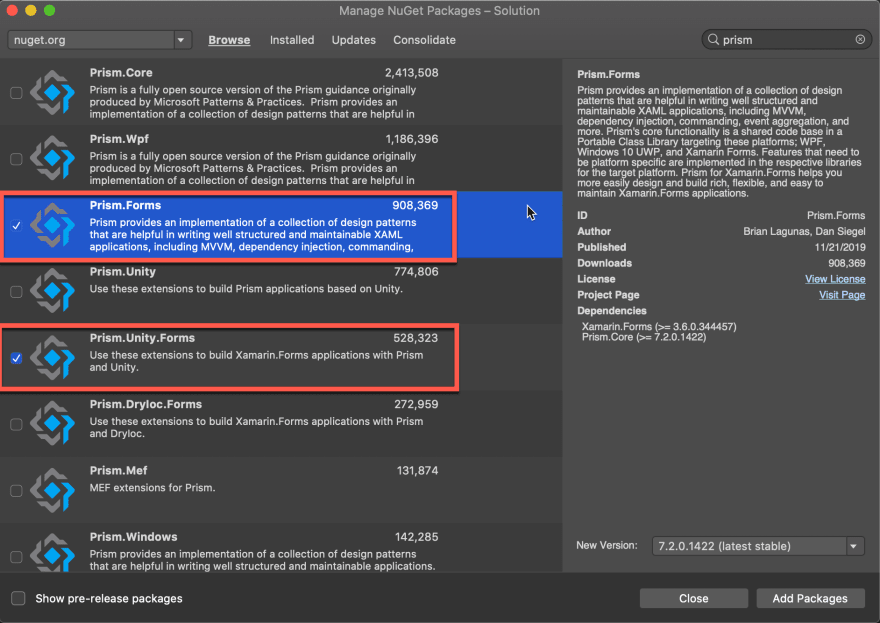 After you click “Add Packages”, you’ll be presented with a dialog to select which projects you want to install the packages into. Select them all!

With the new packages installed, we can start modifying out project for Prism usage. 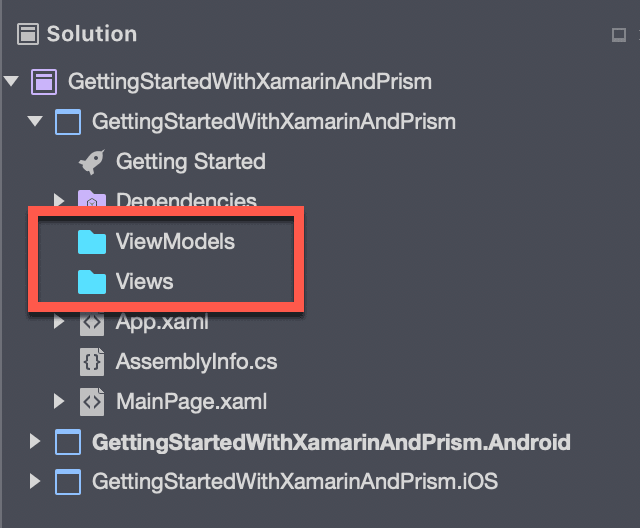 With the new folders, created, let’s move MainPage.xaml into the Views folder: 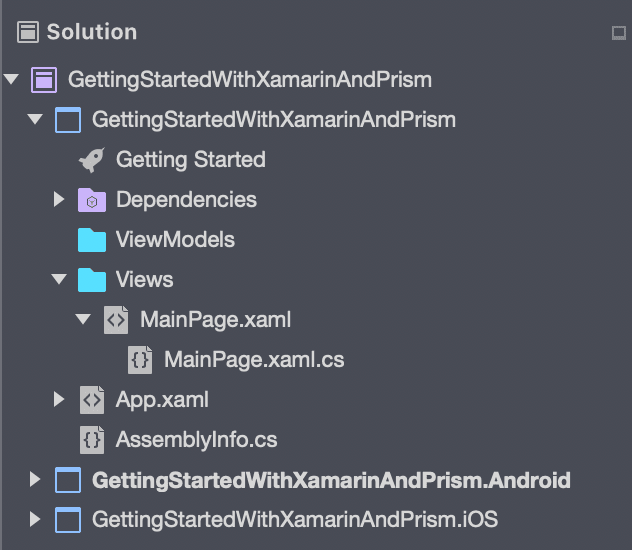 After you move the View, we’ll need to make a couple code adjustments for namespaces and such.

Open the MainPage.xaml file and modify the ContentPage declaration:

Now, open the MainPage.xaml.cs file, and change the namespace to include the Views folder.

Now, we’ll add a new, empty class to act as the ViewModel for this View, named, MainPageViewModel. 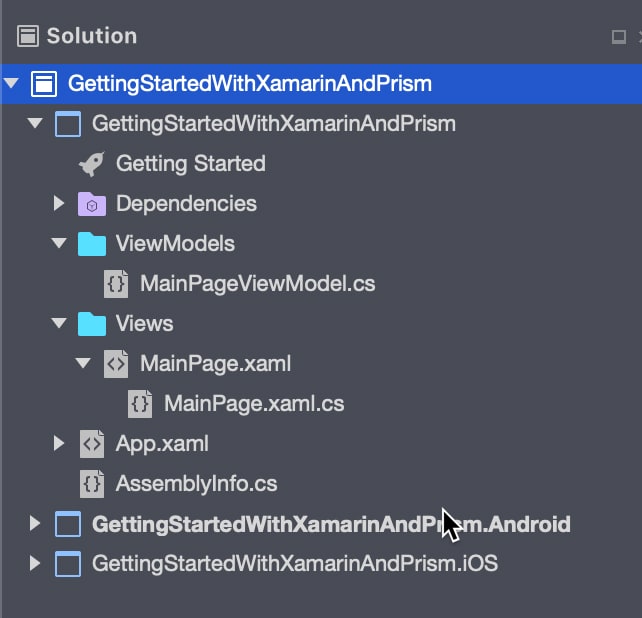 Open the file (if it isn’t already), and change the class to inherit from BindableBase and to implement INavigatedAware. In the end, the file should look like this:

This is just a starting point, and other base classes and interfaces are available to use here, but you’ll have to check out the Prism documentation for that.

Let’s dig into the App.xaml and App.xaml.cs files for the final changes we need to make to the Shared project.

Second, open the App.xaml.cs file to make a few changes:

In the end, the App.xaml.cs should look like this:

That wraps up the changes we need to make in our shared project. Let’s move to our iOS project and make some changes there.

Now we need to do (basically) the exact same thing in our Android project.

That’s it, those are all the changes necessary. At this point, you can set your Android project as the startup project and run it. With any luck, you’ll (eventually) see a screen like this: 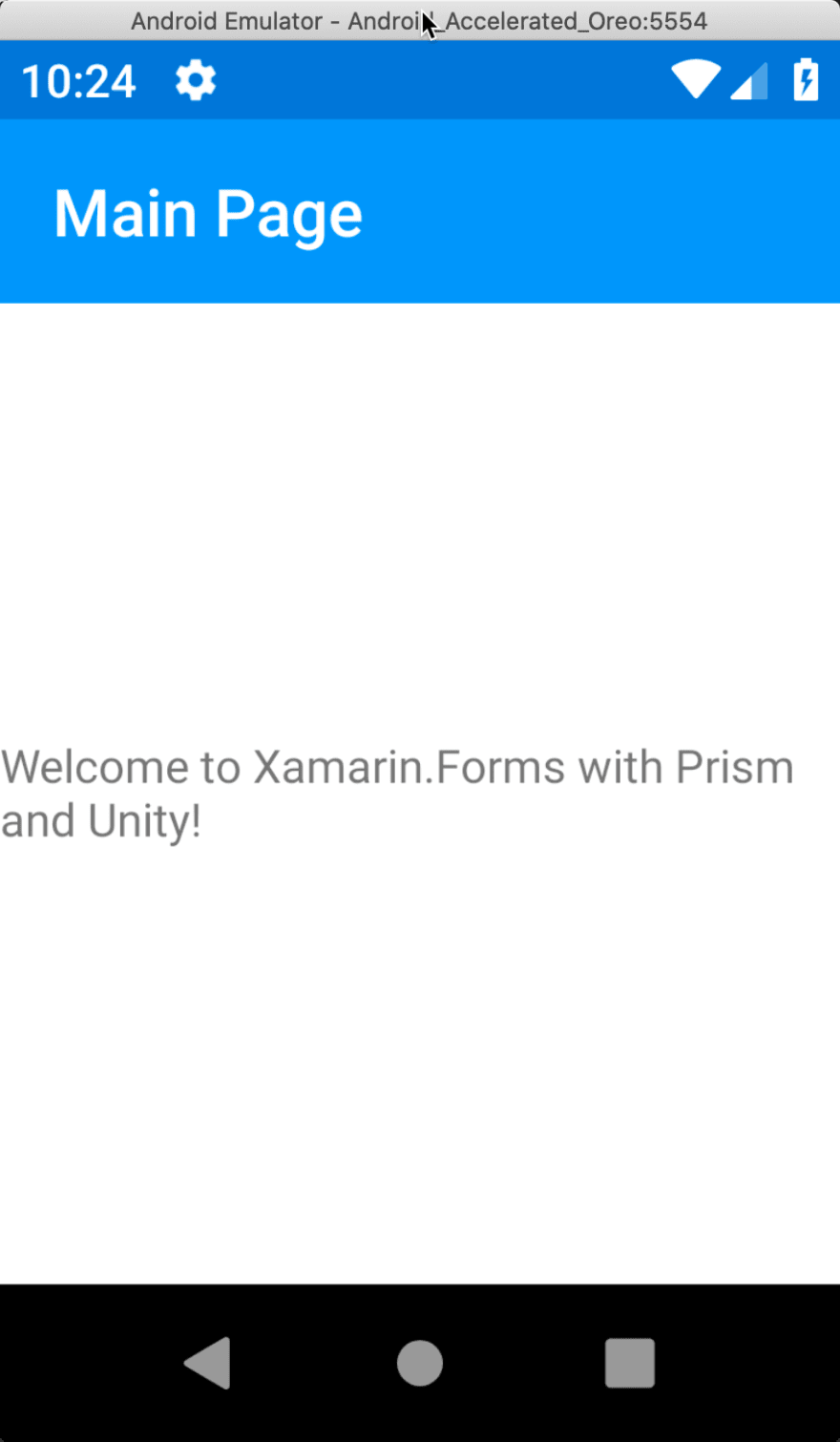 Close the Android Emulator, reset the startup project to the iOS project, and run it. Again, with luck, you’ll see a screen like this: 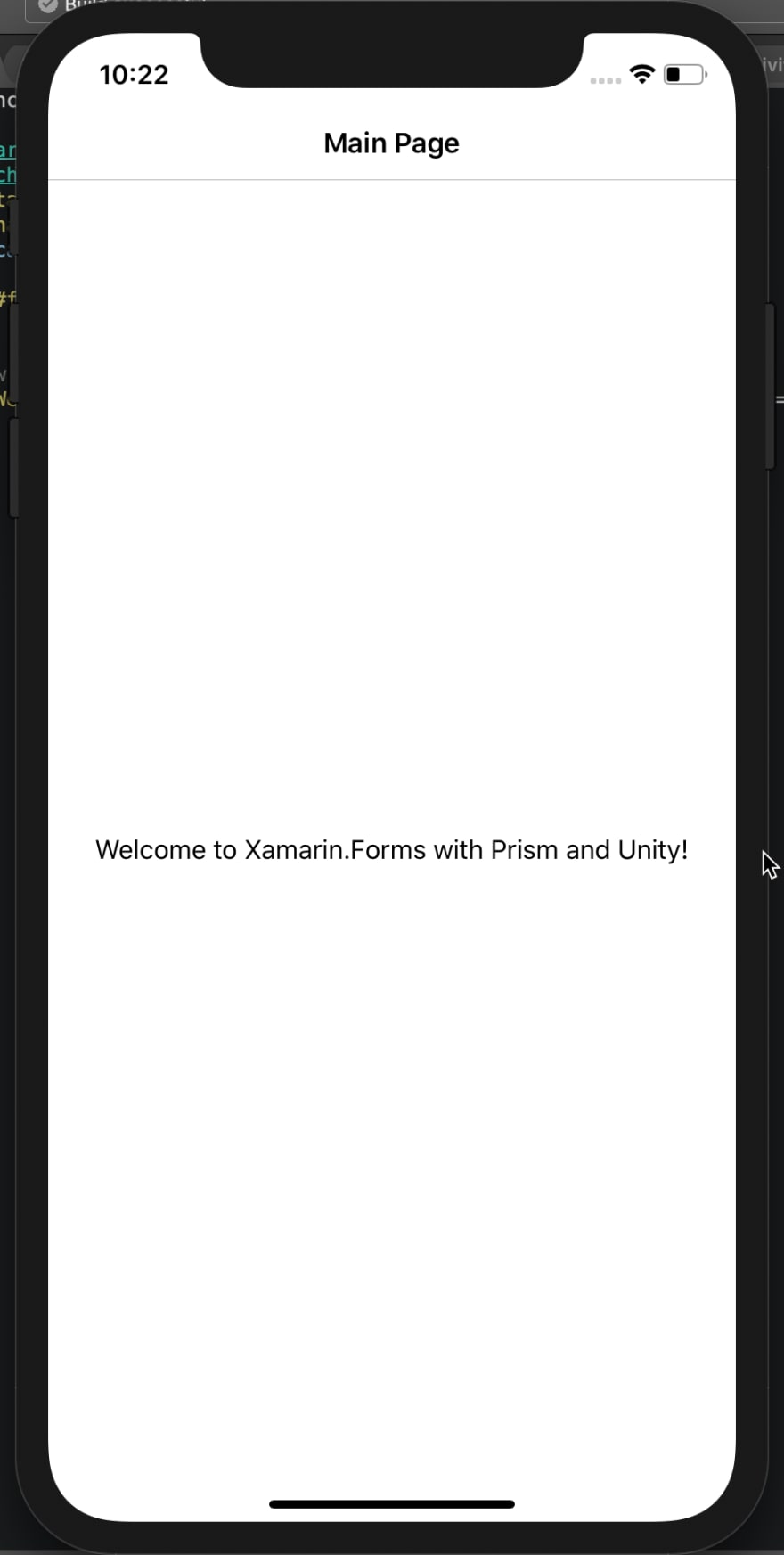 We’re done! Now you can begin adding views, viewmodels, navigation, etc. I’ll do a separate post on the Navigation stuff, but this should get you started!

If you’re interested in just grabbing all the code for this, I’ve got the project pushed up to GitHub - feel free to fork, copy, clone, whatever.

...is because they want to read more. Create an account to bookmark, comment, and react to articles that interest you.

Once suspended, calvinallen will not be able to comment or publish posts until their suspension is removed.

Once unsuspended, calvinallen will be able to comment and publish posts again.

Once unpublished, all posts by calvinallen will become hidden and only accessible to themselves.

If calvinallen is not suspended, they can still re-publish their posts from their dashboard.

Once unpublished, this post will become invisible to the public and only accessible to Calvin A. Allen.

Thanks for keeping DEV Community 👩‍💻👨‍💻 safe. Here is what you can do to flag calvinallen:

Unflagging calvinallen will restore default visibility to their posts.