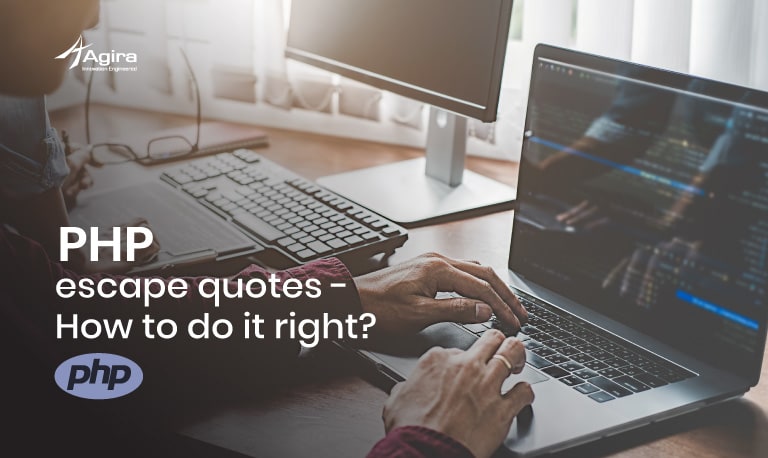 PHP Escape Quotes - How To Do It Right?

PHP Escape Sequence
Escape sequences are used for escaping a character during the string parsing. It is also used to represent line breaks, tabs, alerts, and more. The escape sequences are interpolated into strings enclosed by double quotes or heredac syntax.

Escape sequences are started with the escaping character backslash () followed by the character which may be an alphanumeric or a special character. If it is an alphanumeric character, it gives special meaning to represent the line breaks \n, carriage return \r, etc..

If it is a special character, then it will be considered as it is during the string parsing.

Strings in PHP can be specified in four different ways:

The single quoted and double quoted are the most frequently used.

Single Quoted
The simplest way to specify a string is to enclose it in single quotes - ‘’. It is the easiest way to define a string. You can use it when you want the string to be exactly as it is written. All the escape sequences like \r or \n, will be output as specified instead of having any special meaning. Single quotes are usually faster in some cases. The special case is that if you to display a literal single-quote, escape it with a backslash() and if you want to display a backslash, you can escape it with another backslash(\).

Example -
<?php
echo <<<EOT
Hello World.
EOT;
Output -
Hello World.
Nowdoc
Nowdocs are to single-quoted strings what heredocs are to double-quoted strings. A nowdoc is specified similarly to a heredoc, but no parsing is done inside a nowdoc. The construct is ideal for embedding php code or other large blocks of text without the need for escaping.

\” - To escape “ within double quoted string

\ - To escape the backslash

Conclusion -
In general, you use either or but you should be consistent with what type you use and when. For example you might choose to use single quotes by default unless you need to use variables or special characters within the string.

You might think that because double quotes give you more features, that it would be better to use them all the time, but single quotes are probably better for simple strings because you don’t need to escape special characters like $ sign.

Find the approximate cost to build your Application
Check Out

How to capture screenshots with Puppeteer.