Recently I've asked myself how reactivity in frameworks such as Vue is implemented.

I had already an idea, which involved getters and setters. So my code looked something like the below at some point.

This way, every time the setter for the property a would be accessed, the render function would run. That is already somewhat reactive.

But this is kind of ugly and cumbersome. So I decide to do some research on the topic. I found this article. Although somewhat convoluted, it supported my idea of using getters/setters.

So I tried myself to implement this a bit more fancy.

The core of this implementation loops over the keys of a data object and creates new getter/setters pairs for those on the app instance.

Here is a REPL with a working implementation using lit-html for efficient templating and rendering.

That is already pretty cool and allows writing apps like Vue's option API. However, upon further investigation, I found out that the linked article was lying to me.

Here is another interesting bit to read from the official Vue 3 docs Reactivity in Depth.

There are 2 main takeaways from this lesson.

Let's first take a look at the Object Proxy.

We can create a proxy object, and point it to some real object. Then we can hook into various interaction such as getters and setters. Although there are many more types of so-called traps.

In the above example the handler is not doing anything but in this handler you can write any callback for the different traps.

This is also some more explained in the mentioned Vue docs. The provided example in the Vue docs looks like this.

When a getter is called on this proxy, the original getter from that proxied object is invoked via Reflect call. If the return value happens to be an object, another proxy is created recursively until a scalar value is returned.
Furthermore, it will invoke the track function which will allow tracking which properties have been accessed while some effect was running.

When the setter is accessed, the value on the original object will be set via Reflect call. It also invokes the trigger function, which will be responsible for triggering any effect again that has assessed the property at some point in time.

The other thing that is mentioned in the article is the effect system. The provided example is this.

The idea is essentially to put the running effect on the stack before it runs. Then, when it runs and accesses a property on the proxy, the proxy can look in the runningEffect stack to remember this effect. Later, when the same property is changed via setter, the effect will run again.

Although in the final API for the end user this effect API isn't exposed directly, it is powering Vue under the hood.

Basically everything that happens is just an effect, even the render function.

So the general idea is somewhat clear, but some implementation details are missing. In the first linked article, it is mentioned that Vue implements actually classes for this. However, I decided to keep it as simple as possible, so I will just be using arrays, weak maps and sets.

Here is a repl with a working example. I am using again lit-html to do the templating and rendering work.

Now it is a reactive effect system just like Vue's. To push things a bit further, I have even implemented ref and toRefs as known from Vues composition API.

I decided to leave it at this point and not build an abstraction like Vue on top of it. I actually like the flexibility of it in its current state. For example, the render function could be anything or there doesn't even have to be a render function at all.

This image from the Vue 2 documentation may also be help to picture things. Some details differ a bit, but the general idea is the same. 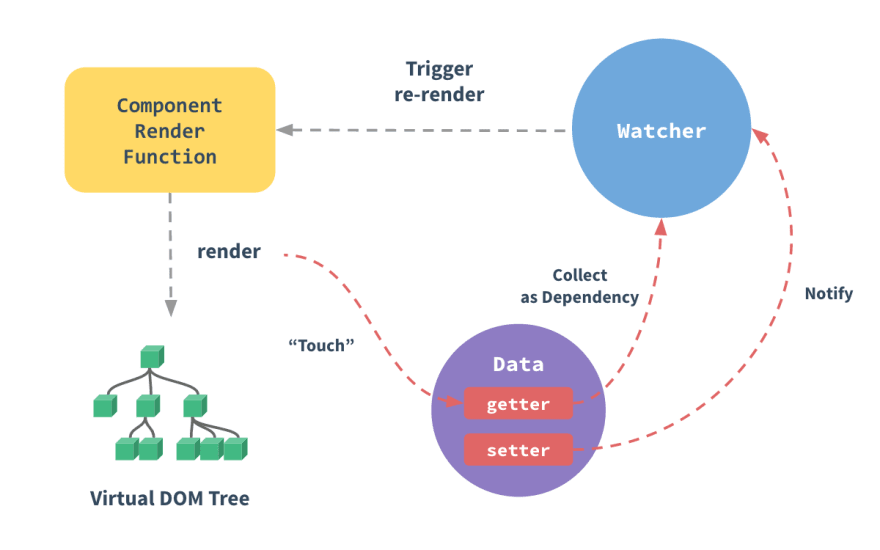 Have a nice day.

I built a applicant tracking system