Did you ever wanted to build your own VS Code Extension? Maybe because some extension you would like to use, is not available in VS Code or you just have a good idea.

The VS Code Extension API has many features and ways you can build extensions. This post will outline a general overview of what is possible.
I won't go too much into detail here as it's an extremely large topic. It is supposed to be the groundwork for more advanced posts on the topic.

The VS Code API

VS Code offers a rich API to do about anything you can think of with the application. It feels similar to working with the DOM and this may be because VS Code is an electron based application.

Below are some example commands to showcase the usage of the API.

There are several types of extension you can create. For example, you could create a language extension that adds tooltips when you hover over certain keywords. Or maybe you want to interact with some third party application and display the results in a separate tab.

The manifest holds the metadata about your extension. It is part of the package.json file. In the manifest you specify for example to which part of VS Code your application will contribute. You can also expose any keybinding here. Even conditionals are possible using a when clause that can be combined with the context we are going to see later.

The context is an important feature. You may be familiar with the concepts from other libraries and programming languages, such as React or Golang. It allows sharing state across the program. State values can be accessed inside the extension manifest for example.

Commands are special type of contribution. They are the building blocks of any extension. Commands allow us to register our functionality and expose it to other parts of the application. We can also make our commands available via key binding.

Setting up a Project

Ok, now we have a rough overview. Let's get our hands dirty by setting up a new project. We are going to use the official boilerplate. Afterwards I will show you how to package your extension and install it from local disc.

The code for the extension sits in src/extension.ts. You can test the extension by running the debugger (press f5).
It will create a second VS Code instance that has your extension installed.
In the case of our example, you can run the command with by opening the command pallete (Ctrl+Shift+P) and typing hello world.

You can package the extension with vcse. Run the following command.

You may need to update your package.json file as some required keys are missing. I had to add a publisher key to the file.

After the build, you have a file with a vsix extension in your directory. While you are normally supposed to make you extension available via Azure Cloud, you can actually install local vsix files.

Open the extension tab and click the three dots in the top right corner and select install from VSIX. 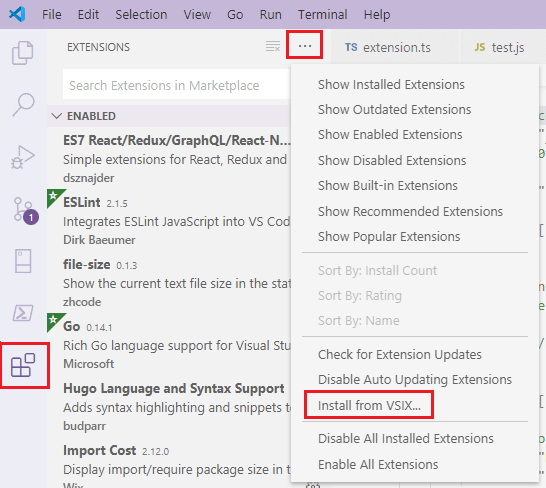 Once suspended, codingsafari will not be able to comment or publish posts until their suspension is removed.

Once unsuspended, codingsafari will be able to comment and publish posts again.

Once unpublished, all posts by codingsafari will become hidden and only accessible to themselves.

If codingsafari is not suspended, they can still re-publish their posts from their dashboard.

Once unpublished, this post will become invisible to the public and only accessible to Nico Braun.

Thanks for keeping DEV Community 👩‍💻👨‍💻 safe. Here is what you can do to flag codingsafari:

Unflagging codingsafari will restore default visibility to their posts.