If you can’t explain something in simple terms, you don’t understand it.
- Einstein

Open AI recently released GPT-3 for natural language processing. One of the cool features is the ability to summarize complex passages for a second-grader.

My time in college was spent translating complex Computer Science topics to simple analogies. So I thought I'd share my translation on the holy grail of complex CS topics: time complexity and Big O notation.

This post covers constant, linear, and quadratic time complexities in detail. If you don't know what those mean, read on. If you do and you're looking for logarithms, you'll have to wait on a future post - sorry!

Big O notation is a way to describe how quickly a function grows.
- GPT-3

Let's break down the function first

Say we go through a drive-thru. We drive-in. We order. We pay. We receive our food. We drive out. 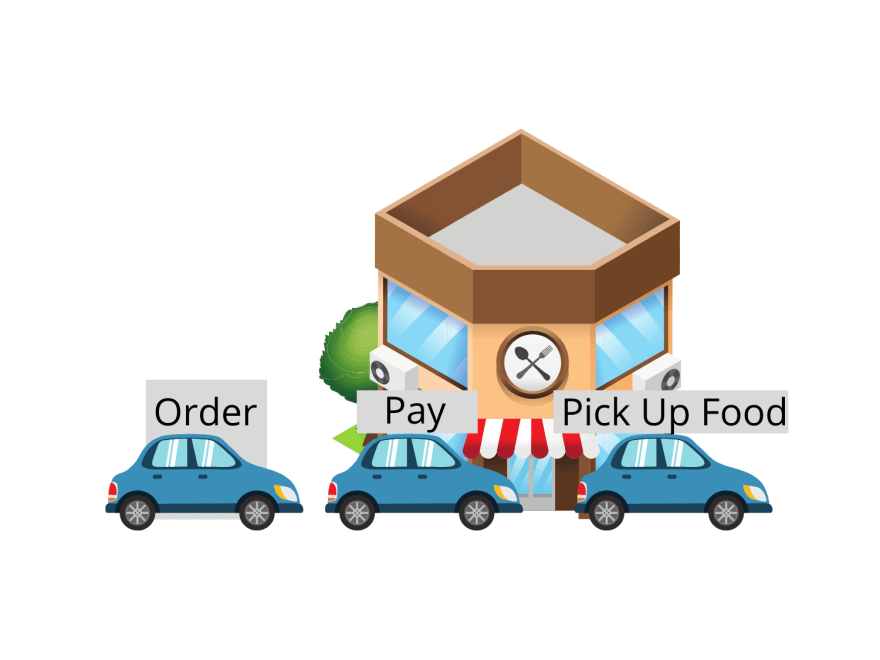 Why do some cars get through the drive-thru faster than others?

A car can hold N amount of people. For example, a sedan holds five people and a van holds ten people. The drive-thru has no idea how many people are in a car when the car enters. Let's say we have a truck with one person and a van with ten people. And our drive-thru has a strict limit of one payment per vehicle.

The truck quickly proceeds through every step. The van takes a long time on the order and food steps. However, the pay step for both the truck and van takes an equal amount of time.

The time it takes a car to get through the drive-thru is dependant on how many people are in the car. Think of the car as an array of objects. Each object is a person with an order.

So when we pass the car into the function, the function has to look at each object in every step. 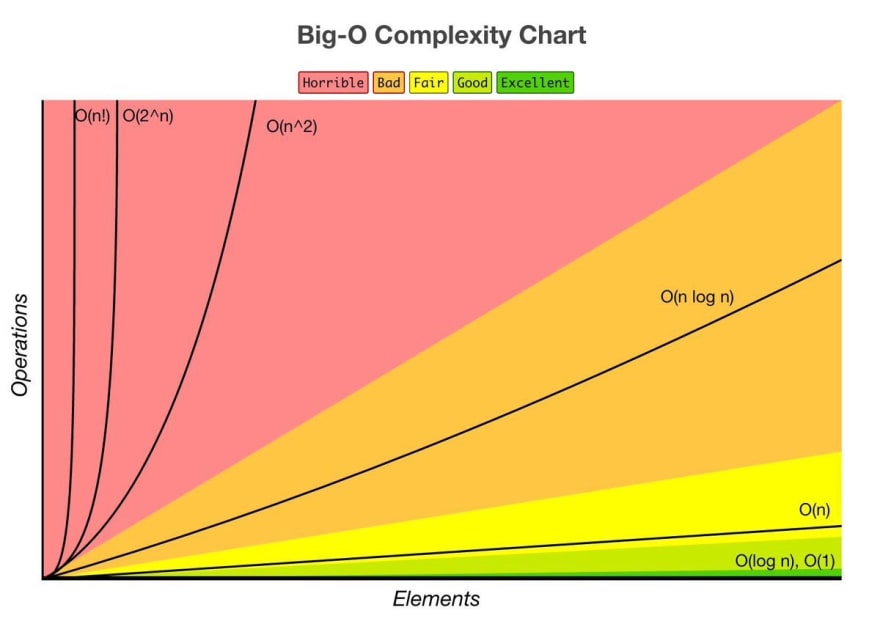 In CS, "N" or sometimes "K" is used to describe a number of something constant.

To simplify this, we could say we have N cows and N*2 chickens.

Maybe we have cows squared chickens. So we could say we have N cows and N^2 chickens. When N is 5, that would be 5 cows and 25 chickens.

Big O notation uses N to describe the number of steps because we never know how many steps something might take. In our drive-thru, a car might have 1 person or 10 people. We don't know. So we describe them in terms of N because we're worried about measuring the efficiency of the drive-thru not how many people it can handle.

For example, maybe only 5 cars go through Wendys a day, and each car has 1 person. While McDonald's has 1 million busloads go through each day. It would be pointless to compare the efficiency of the drive-thru based on how many people are served. That's why we use N to in Big O notation.

But what about timing the drive-thrus? We could see how long in terms of the time it takes Wendy's and McDonald's to handle 1,000 cars to estimate the efficiency, right?

Yes. Timing is another method of measuring functions. If Wendy's has a poorly run drive-thru, it will take them more time to serve 1,000 cars. However, it would take a lot of experimentation to build an efficient drive-thru based on timing every step.

Big O measures how many steps repeat themselves as the parameter grows. So we can build a drive-thru that limits the amount of repeating steps, without the expensive experimentation.

Measuring a function with Big O

Big O is a way to measure the efficiency of functions for the best, average, and worst cases. I use to work at McDonald's. The worst-case was a busload of people coming through. The best-case was a car ordering a Sprite. I was always worried about the worst-case, even though it didn't happen very often.

Computer Scientists are always worried about the worst-case too. So let's analyze our drive-thru function for the worst-case scenario and put it into Big O notation.

Our drive-thru function in Big O notation is O(n). In mathematical terms, our time complexity is linear.

If we didn't have the order or food steps, our Big O notation would be O(1). It would have a constant time complexity.

Let's say our kitchen messes up orders a lot when they're overloaded. For every order, they make order squared mistakes. So our order step would still be O(n), our pay step would be O(1), but our food step would be O(n^2).

If we have 5 orders, there would be 25 mistakes on the food. Which means the food step would loop 25 times before getting the order correct. When Big O notation is O(n^2), the time complexity is quadratic.

Quadratic time complexity is often done in code with nested for loops. For example: 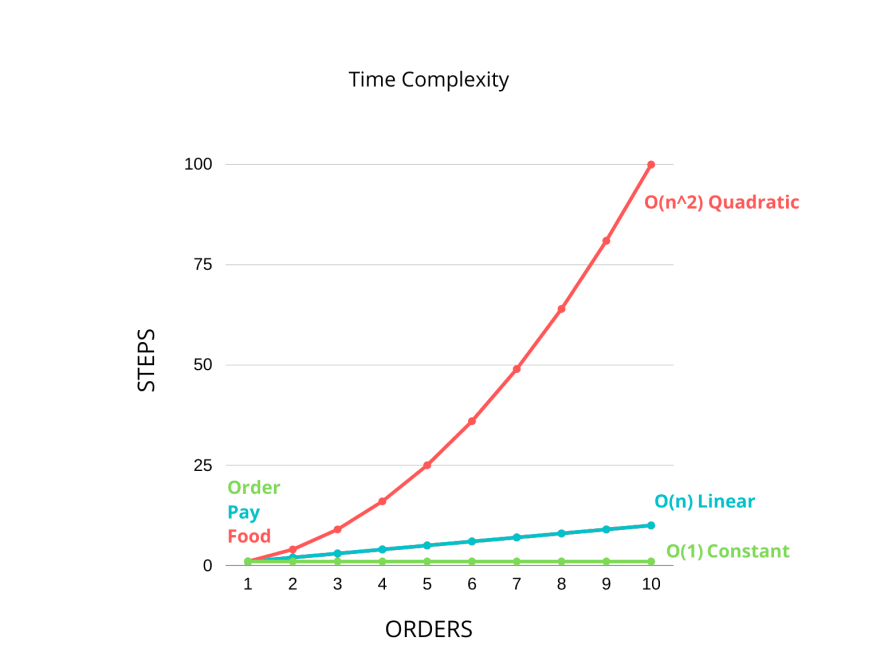 The graph shows where the bottlenecks in our drive-thru exist before ever actually using the drive-thru. Yes, we could run a test and time 1,000 cars and find the same bottlenecks. But in a real-life scenario that would take a lot of time and be expensive. Analyzing algorithms with Big O notation allow us to find bottlenecks and fix them before we implement them in production.

Another important point is to notice that for 1-3 people, the time or step difference isn't really that much. Big O notation is good at describing worst-case scenarios. Maybe, cars in our drive-thru never have more than one order. If that's the case, optimizing the food step might not be worth it. Instead, we could optimize in other areas, such as installing a second drive-thru.

In programming, we strive for O(n) linear time complexity. O(1) constant time complexity isn't really possible except for simple tasks like addition. O(n^2) should always be avoided. Sometimes algorithms (such as binary search) don't fit any of these, and that's where logarithms come in. I'll update this post with the link to the logarithm article when it's finished!

I hope you have a solid understanding of Big O notation and time complexity now. I'm sure my fast-food analogy could be improved, let me know what you think!

5 habits every developer should adopt!

How I started my Web Development journey