We use variables in JavaScript a lot. An awful lot. And it’s for good reason. But Why? Well, JavaScript needs a way or mechanism to store values in order to manipulate data, interpret data, carry out instructions and ultimately execute a task. One way we can store values is to store them in variables. Variables are used as containers of values.

But how can we make use of a variable?

But it is highly advisable to use let and const not var for reasons we will discuss later. For now let’s assign values to the variables above. Since we have already declared the variables we can store or assign values. For example:-

The first time we assign a value to the variable it is called initialization. In other words assigning the initial value. Or rather initializing the variables.But we can also declare and initialize the variables at the same time. For example:-

After you have declared and initialized a variable you can change the value assigned to it multiple times. Sometimes this happens by accident especially when you are working in groups. If you want the variable to have a constant value you can declare it using const. When using const you can’t just declare the variable, you also have to initialize it with the constant value. And like the name suggests you can’t change the value of a variable declared with const otherwise it wouldn’t be a constant, would it? For example:-

Instead you have to change the value you used to initialize if you want a different constant value or declare a new variable.

Before 2015 const and let were not in use. We only used var to declare and initialize variables. But after 2015 we abandoned var and prefer to use let and const for the most part. But Why? Why is that so? Well, there are several reasons for that.

Another difference comes into mind in regards to the concept of hoisting. But what is hoisting? Great questions! Hoisting is a concept that describes a mechanism in which it’s possible to use variable declarations and call on functions before they are declared.

That’s unusual since it should not be possible to use variable or functions before they are declared or exist for that matter. It seems like the variable and function declarations where pushed above the lines of code they are being used or called up on.

With this in mind, let’s get to the another main difference between var on one side and let and const on the other side. Variables declared with let and const are block scoped whereas variables declared using var are not block scoped. What do I mean by this. If the variable is declared using var then it is accessible or visible for use inside the entire window if declared globally or in the global scope and it is accessible or visible inside the entire function if it is declared locally or in the local scope. This is true regardless of whether or not it is declared inside blocks. let's look at the following to understand this.

The same things happens in inside the function or local scope. 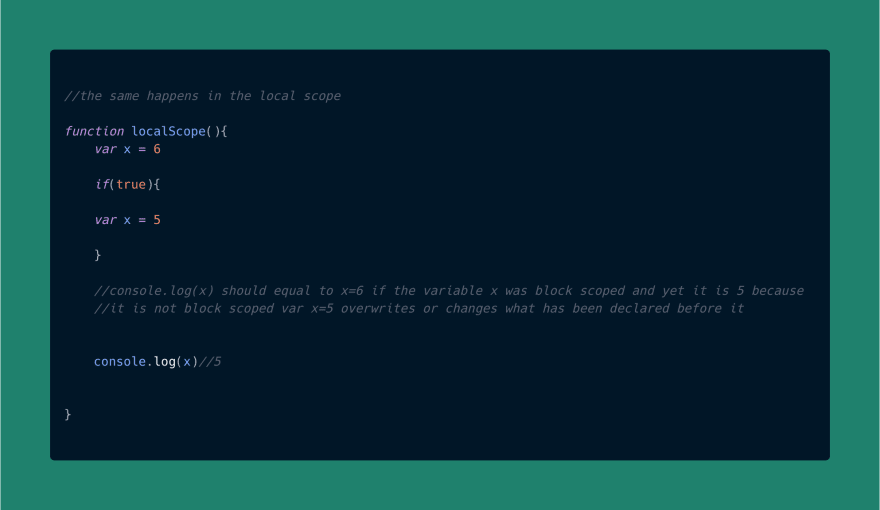 Similarly if the variable is declared inside a block within a function or local scope, you can't access it from outside the block because variables declared with let and const are block scoped.

Here are the three main disadvantages of using let and const instead of var:-

And all these results in less likelihood of bugs compared to using var to when making variable declarations.

And there you have it! Please let me know what you think.