I share one trick a day until the original scheduled date of the end of the COVID-19 quarantine in Switzerland, April 19th 2020. Eight days left until this first milestone. Hopefully better days are ahead.

Yesterday I suddenly remembered that I still had to create a GitHub Actions to build and deploy the editor of our project DeckDeckGo.

Even though most of the integrations are already automated, this feature is still on my Todo list because I will have to obfuscate some production tokens before being able to properly finish this task.

When I thought about it, I asked my self if I actually had not already solved such feature in another project recently? Guess what, indeed I have 😉, but in an Angular prototype. A small project I developed for my self in order to help me find a flat in Zürich a couple of weeks ago (Watamato if interested, check it out).

That’s why I am sharing with you today this new tricks.

Angular, out of the box, let us handle environments variables thanks to the property fileReplacements of our angular.json . Per default, most probably, your project contains two files, an environment.ts and another one for your productive build, environment.prod.ts .

The idea is the following: In environment.prod.ts we are going to define keys without any values, allowing us to push these in our public GitHub repo safely. Then, with the help of system variables, set these before build within our GitHub Actions.

Note: This article has for goal to obfuscate the environment variables from your repo. After build, these are still going to be present in your bundle.

To begin with, let’s setup first our environment.ts files. Our goal is to obfuscate a token, let’s say for example that we want to hide our Firebase Api key.

Not really related to the solution but let’s say a goodie, we also inject the version and name of our application in your configuration. Note that this requires the activation of the compiler options resolveJsonModule to true in your tsconfig.json.

And our environment.prod.ts which contains 'undefined' for the hidden value. The reason behind this being a string is the fact that our upcoming parser is going to inject such value if the key is not defined at build time.

In the previous setting, I amend the fact that we are agree to expose our key in our development configuration, but you might also want to hide it. In such case, what I recommend, is extracting the values in a separate local file which you explicitly ignore in your .gitignore.

For example, let’s say we create a new file firebase.environment.ts in which we move our configuration and which add to the list of Git ignored files.

Then we can update our environment.ts as following:

Our productive environment contains at this point an hidden value 'undefined' which we have to replace before building our application.

For such purpose we can use the “magic file” described in the article of Riccardo Andreatta 👍.

We create a new script ./config.index.ts . Basically what it does is overwriting our environment.prod.ts file with new values and notably these we are going to define in your environment or GiHub Actions secret store.

In this parser we notice two interesting things:

Finally we can add the execution of the script to our package.json :

We are all set, we can now give it a try. Let’s first run a build without doing anything. 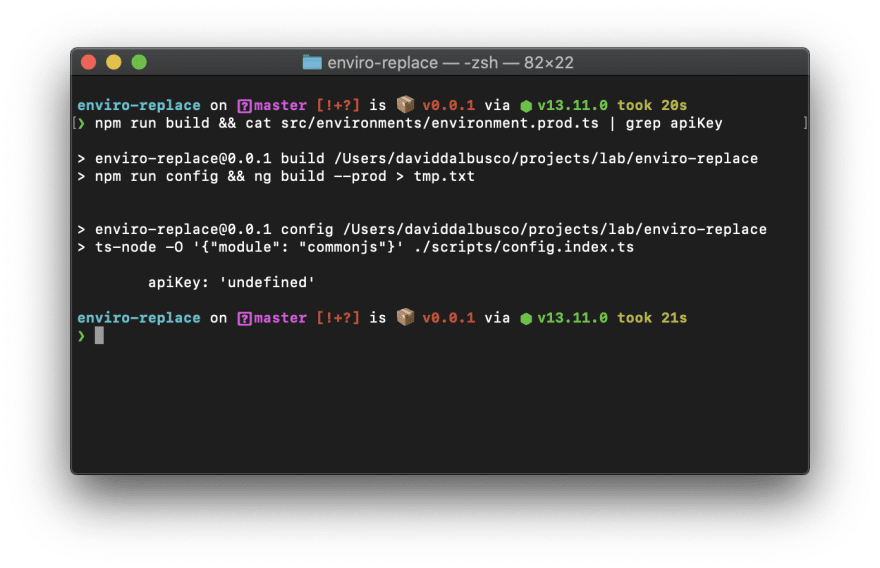 As you can notice, our apiKey remains equals to 'undefined' and therefor not valid for our build.

Let’s now try to define an environment variable (export FIREBASE_API_KEY="this is my prod key") and run our build again. 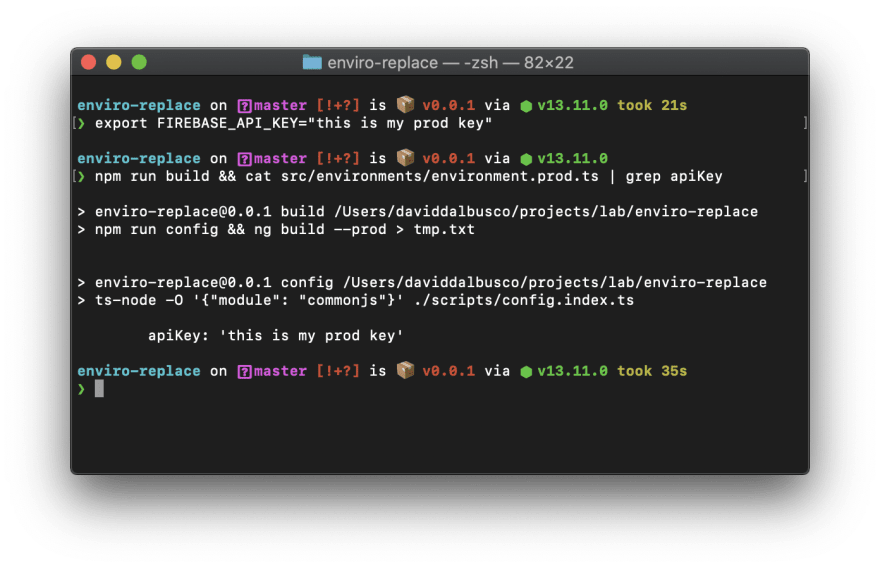 Tada, our environment variable has been set and use for our build 🎉.

At this point you may ask yourself “yes but David, if we do so, then each time we run a build our environment.prod.ts file is going to be modified”. To which I would answer “yes you are right … but our goal is to automate the build with a GitHub Actions in order to not run productive build locally anymore, therefore the modification is not that a problem for our daily workflow 😇”.

The very final piece, the automation with GitHub Actions.

I am not going to cover how is it possible to create such script, Julien Renaux covers well the subject in one of his blog post or alternatively you can check out of my Angular related app.yml GitHub actions.

I assume that your script is ready and that you have defined a FIREBASE_API_KEY in your repos’ secrets.

The related build sequence of your application probably looks like the following:

To which we now “only” need to add the following:

That’s already it. Doing so, GitHub Actions will set the related environment variable for our build and our above script and configuration will take care of the rest.

GitHub Actions are so handy, there were and are a big asset to my continuous integration workflow.

How to Create Custom Form Validation in React with Yup