According to the latest report from Statista, the global augmented reality (AR) and virtual reality (VR) markets are exploding and are forecast to reach a total of 72.8 billion U.S. dollars by 2024.

Given the rapid growth of the AR industry, developers and non-developers alike are leveraging some of the most popular platforms, developer tools and software development kits (SDKs) to create exciting AR applications and experiences. Here is a list of the top ten AR developer tools that every developer should know which will hopefully serve as a helpful resource (in no particular order):

Already at version 4, Apple's ARKit is used by iOS developers to build mobile AR apps and games for iPhones, iPads, and other Apple devices. ARKit uses visual inertial odometry technology to identify the dimensions of the surrounding environment and adjust lighting conditions based on the location of 3D objects. It offers image and surface detection as well as object and facial tracking, all of which allow you to create immersive multiplayer AR games. A product of Apple, ARKit allows supports development in iOS only.

ARKit is provided for FREE by Apple. Learn more about ARKit here (great documentation can also be found here).

Google's ARCore has many features that help integrate AR elements into the real environment, including motion tracking, surface detection, and lighting estimation. In particular, it allows 3D objects to be simultaneously rendered on different devices. It supports development in Android, iOS, Unreal, and Unity as well as 3D drawing with Google's Tilt Brush.

ARCore is provided for FREE by Google. Learn more about ARCore here.

You can learn more about echoAR and start for FREE here.

You can learn more about Unity and start for FREE here .

A popular AR SDK, Vuforia deploys computer vision technology to recognize and track 3D objects in real time. It allows developers the ability to create both marker-based and markerless AR experiences and one of its highlight features is its support of persistent objects. Vuforia provides an API for multiple programming languages and support native development for iOS, Android, UPW, and Unity.

The Vuforia SDK is owned by PTC and is offered for free (with limited functionality) and as part of paid subscriptions. Learn more about Vuforia here.

Wikitude is a flexible AR development tool with which developers can customize solutions and retrieve 3D objects from third-party SDKs through its own platform. Some of its features include navigation support, distance-based scaling, and localization. Wikitude can be used for Android, iOS, and Windows for tablets, and certain smart glasses.

Wikitude has a free trial (with watermarks) as well as paid subscription plans. Learn more here .

You can start using Spark AR studio for FREE here.

8th Wall provides powerful tools to create WebAR experiences which are optimized for the browser. 8th Wall supports great AR features such as face effects, world tracking, and image targets, and allows for source code control through a cloud editor.

Similar to Vuforia in many ways, Kudan uses Simultaneous Localization and Mapping (SLAM) technology to create high-quality 3D graphics and recognize images and objects. Kudan has some great features such as marker-based tracking, map integration and camera-relocalization, and supports development on Android and iOS.

Kudan has a FREE version as well as a paid one. Learn more about Kudan here.

Many of the above AR platforms, developer tools and SDKs are complementary and can be used in tandem. For example, ARCore provides an SDK for Unity. echoAR's cloud platform also supports many AR client-side SDKs such as ARCore, ARKit, Vuforia, WebXR, AR.js, Unity-based SDKs, and more. The AR world is expending rapidly with more and more developers creating immersive 3D experiences that interact with the real world. These developers are always in search for great tools to help team create amazing apps while saving them time, money, and effort.

Not sure where to begin? Join the echoAR community of AR builders on Slack and reach out to developers and AR enthusiasts just like yourself. 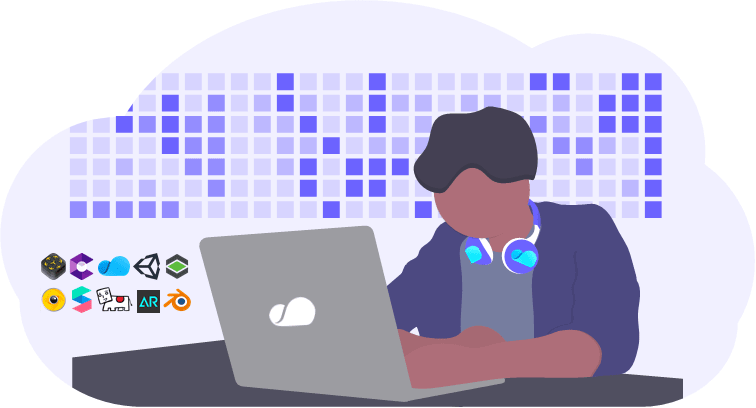 JavaScript Arrays and its Methods.