It’s interesting that the graphs look so irregular, but the matrix forms are very regular.

Never ever underestimate the power of a good nights sleep when coding. Where once I was blind now I can see #React #javascript

I just taught a good developer with 5 years of javascript experience that you can use `debugger;`

he is losing his shit right now. he's been debugging with console.log for his entire career. 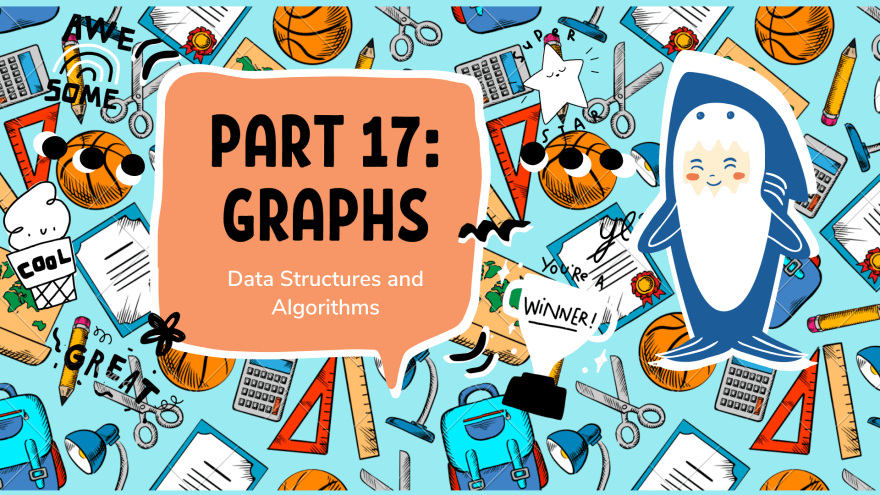 In this Part 17, you will learn graph basics, including fundamental terminology and graph types. The Part 17 will also cover working with these different graph types and methods of representing graphs in data structures. Finally, algorithms for traversing, searching, and sorting graphs are explored to solve problems such as finding the shortest path between two graph nodes. (👍)

Graphs are visual representations of the connections
between objects. Such representations can be of many things and have different applications; Table 17-1 (below) shows some examples:

Before we delve into graphs too deeply, it is useful to introduce some basic terminology and concepts:

Figure 17-6. Graph without a cycle

Up Next (🔜):So far, the concepts of graphs have been discussed. Now, let’s start implementing these ideas into code and learn how to add and remove edges and vertices. (😉)

First, we’ll create a new class for an undirected graph:

Note (📝): The undirected graph should have an object to store the edges. This is implemented as shown in the following code block above.

To add edges, vertices must be added first. This implementation will take the adjacency list approach by having vertices as objects (or keys) in which edge values are stored:

To add weighted edges into the undirected graph, both vertices in the this.edges objects are used to set the weight:

With this, let’s add some vertices and edges with the following code:

Figure 17-10 (below) shows the graphical output from this code:

Continuing with the same example, let’s implement the functions for removing edges and vertices. To remove an edge from a vertex, look for vertex in this. edges and delete it using JavaScript’s delete operator:

Next, let’s delete an entire vertex. One important point to remember is that any time a vertex is removed, all edges connected to it also must be removed. This can be accomplished using a loop, as shown in the following implementation:

With this, let’s add some vertices and edges, and remove the edges and vertices at the same time with the following code:

Let's explain what the code did to the graph:

Directed graphs are graphs that do have a direction between vertices, as shown in Figure 17-14 (below):

Let's explain what the code did to the graph:

Notice the similarity of a level-order traversal for a binary search tree with the Breadth-first search graph in Figure 17-19 (below):

Similar to the level-order traversal, a queue is needed for a BFS.
For each node, add each of connected vertices into a queue and then visit each item in the queue. Let’s write a BFS algorithm for the graph class:

Note (📝): The time complexity is O(V+E) , where V is the number of vertices and E is the number of edges. This is because the algorithm has to go through every edge and node to traverse the whole graph.

Applying the BFS to the graph, the following is printed: 1, 2, 5, 3, 4 . In Figures 17-21 and 17-22, the green node represents the node being currently visited, while the red node represents that the node has already been visited: 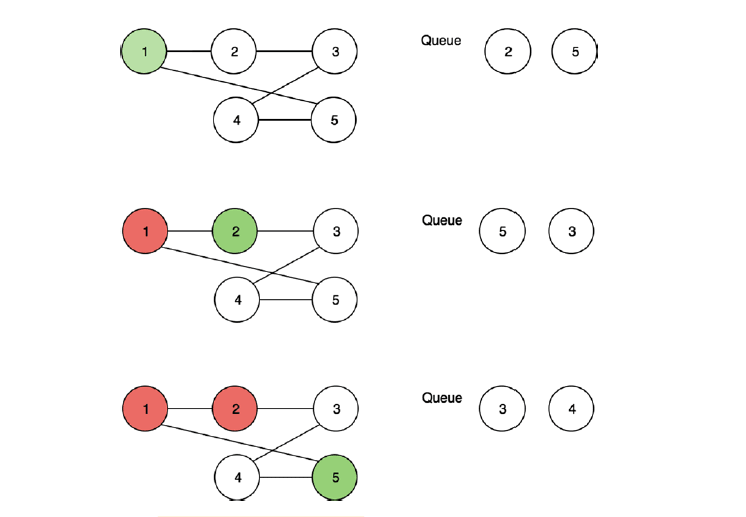 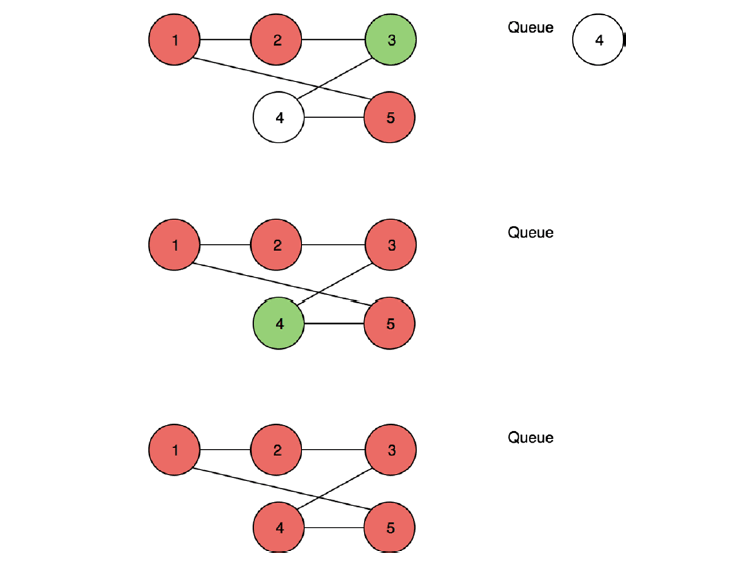 Depth-first search (DFS) refers to a search algorithm in a graph that focuses on traversing deep into one connection before visiting the other connections. This idea has been explored in Part 15 (Learn More) with in-order, post-order, and pre-order traversals.

Something similar is shown in Figure 17-24 for a graph:

Notice how E is visited last. This is because the search visits all the nodes connected to C before visiting E. Similar to traversal for the tree data structure, recursion is used to go deep into a node. Let’s write a DFS algorithm for the graph class:

Applying the DFS to the graph, the following is printed: 1, 2, 3, 4, 5 . In Figures 17-26 and 17-27, the green node represents the node being currently visited, while the red node represents that the node has already been visited: 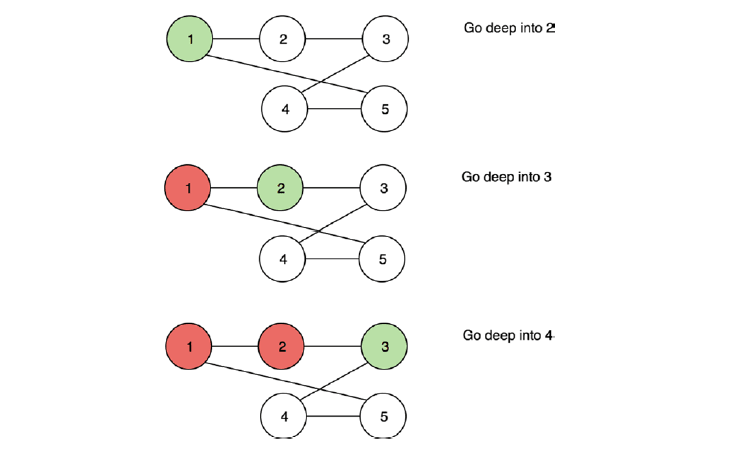 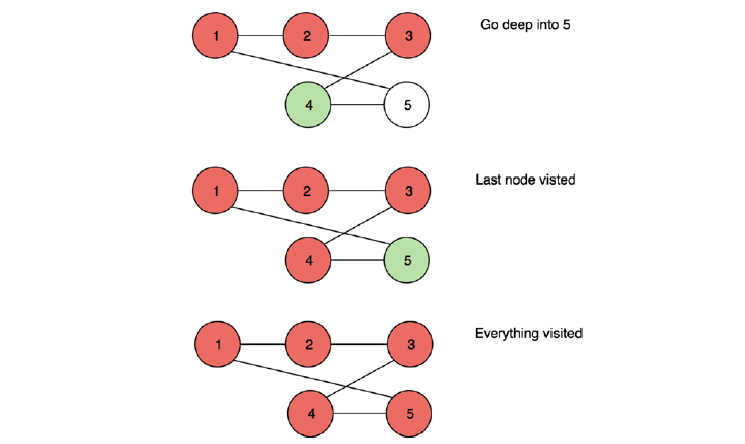 Reminder (💡): Now that we have covered the basics of graphs and how to traverse them, we can discuss weighted edges and Dijkstra’s algorithm.

Recall that edges (➡️) in a graph represent a connection between the vertices. If edges establish a connection, weight can be assigned to that connection. For example, for a graph that represents a map (🌍), the weights on the edges are distances.

Note (📝): The most important question for weighted edge graphs is, what is the shortest path from one node to another? There are shortest path algorithms for graphs. The one we discuss is Dijkstra’s algorithm

Dijkstra’s algorithm works by taking the shortest path to get to a destination. At first, the distance is marked as infinity first because some nodes may not be reachable.Then at each traversal iteration, the shortest distance is chosen (see the example below first to get an idea):

extractMin is implemented to compute the neighboring node with the smallest distance for a given vertex. Using the breadth-first search to enqueue the neighboring nodes for each vertex as the graph is traversed from the origin to the destination, the distances are updated and computed:

The algorithm here is similar to the BFS algorithm but requires the extractMin method, which is O(n) in time complexity. Because of this, the time complexity is O(V2+E) because all neighbor vertices of the node currently being traversed have to be checked during the extractMin method. This algorithm can be improved using a priority queue for the extract min, which would yield O(log2​(V)) extractMin and hence yield an overall time complexity of O(E+V) ×O(log2​(V)) = O(Elog2​(V)) . This can be even more optimized by using a Fibonacci heap, which has constant time to compute extractMin. However, for simplicity, neither a Fibonacci heap nor a priority queue was used for this demonstration.

For a directed graph, it can be important to know which node should be processed first (☝️). An example of this is a task scheduler where one task depends on a previous task being done. The topological sorting algorithm implements this. It is a modified DFS. Put simply, it works by performing DFS from a node until its connected nodes are exhausted (or finished) and by adding it to the stack: 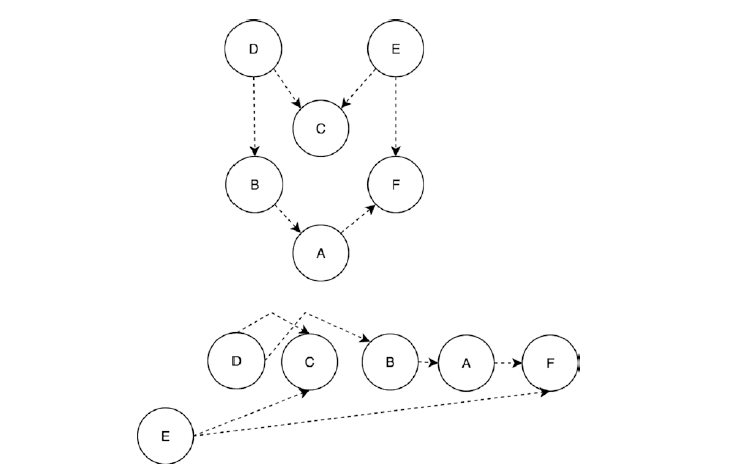 Topological sorting has a visited set to ensure that the recursive call does not result in an infinite loop. For a given node, that node is added to the visited set, and its neighbors that have not been visited are visited in the next recursive call. At the end of the recursive call, push and reverse is used to add the current node’s value to the stack. This ensures that the order is chronological:

The topological sort algorithm is simply DFS with an extra stack. Therefore, the time complexity is the same as DFS. Topological sorting requires O(V) in space because it needs to store all the vertices in the stack. This algorithm is powerful for scheduling jobs from given dependencies.

This Part 17 discussed different types of graphs, their properties, and how to search and sort them. A graph, composed of vertices and connected via edges, can be represented as a data structure in many different ways. In this Part 17, an adjacency list was used to represent the graph. If the graph is dense, it is better to use a matrix-based representation of a graph instead. In a graph’s edges, weights signify the importance of the connected vertices.

Moreover, by assigning weights to edges, Dijkstra’s shortest path algorithm was implemented. Finally, graphs are versatile data structures with various use cases and interesting algorithms. Table 17-2 and Table 17-3 (below) shows some key properties of the graphs and summarizes the graph algorithms: 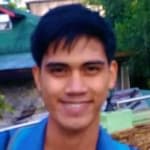