Once a year, when the personalized "Wrapped" stories are published, Spotify gives us insight into our music library. If you don't want to wait until December to explore your listening habits, the Spotify API is there for you year-round. This post explains some of the whys and hows of the demo I made to download my Spotify library.

I don't care, take me to the demo!

The easiest way to authorize a user and get access to their Spotify data is via the implicit grant flow (a.k.a "temporary user authorization").

Implicit grant flow is for clients that are implemented entirely using JavaScript and running in the resource owner’s browser. You do not need any server-side code to use it. Rate limits for requests are improved but there is no refresh token provided 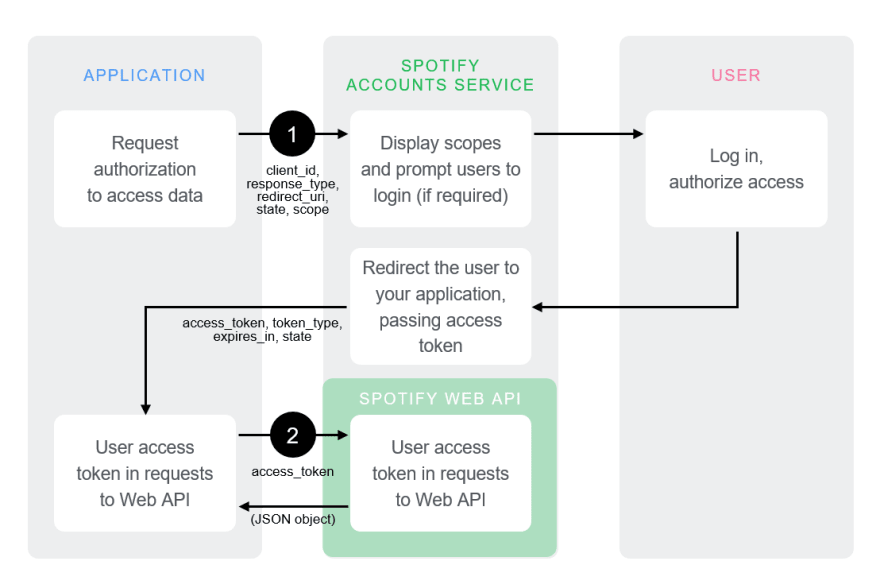 This method is perfect to get started with the Spotify API and suitable for small applications that don't depend on too much computing power. The demo app, written in React.js, implements this flow as following:

Doing popup authentication was a deliberate choice. Alternatively, and as demonstrated in Spotify's official implicit grant example, the user could be forwarded to authenticate in the same window. Popup forms, on the other hand, are a popular choice for 3rd party logins and most users are used to them thanks to Facebook, Twitter and co. Instead of Login with Facebook, it's simply Login with Spotify.

Getting the user library

When a user clicks "download my library" in the demo app, their songs are fetched recursively. This is due to the fact that Spotify returns a maximum of 50 songs per request. As a little bonus, their current favorite songs based on calculated affinity are shown as well.

In between each of these requests, follow-up requests are made to get extra information for each track. The reason for these additional requests is that a lot of interesting data is not provided on the basic track object. Music genres, for example, are not provided.

Getting the track genres

Since a single track doesn't come with any genres, its album sure does, right? Well, technically, when asking for the details of a specific album, Spotify does include a list of genres, but I found these to be empty for all the albums in my library. Thousands of tested albums - not a single genre.

Here are two gists showing what I mean. Just search for "genres"

The second, even less accurate approach to figuring out what genres a song is associated with is via the corresponding artists. Luckily, Spotify assigns most artists at least one music genre! This is why in the demo, after each library request, another request is made to fetch the artists details of a track. The data is stored in Redux along with the "basic" track data, and a selector enriches the existing track data with the genres of its main artist.

Getting the track genres... almost right

Genre data is super exciting. With millions of different sounds, I have no clue how Spotify assigns genres to artists. But thanks to the demo, I know now that Tame Impala's music classifies as "australian psych, neo-psychedelic". Nice.

Linking track genres based on their artists works but has some drawbacks. The demo currently assigns track genres based on the first artist of a track. This may not always be accurate. The underlying assumption is simply that the first artist is the main artist of a track and thus has the most influence on a song, but who knows.

Another very interesting aspect of a track are its audio features. Spotify assigns each of their over 70 million tracks various properties that describe the song's character. Here's the example from the docs.

The audio features for each track in a user's library are downloaded as part of the "extra information" downloads mentioned earlier and available in Redux. Unlike the derived genres, they are not mapped to the original track object due to performance reasons. Each time new genres are fetched for a track, a selector (re)computes a derived/enriched track object with the genres. Doing the same for the audio features would further slow down the process. Since everything happens 100% client-side, doing resource intensive mapping may not be the best idea.

The audio features for each track in a user's library can still be downloaded as a separate file.

The demo includes an option to export a user's library as JSON file in different formats.

The light, flat and audio features exports are suitable for further processing and are tested to work with pandas.read_json. Here's how the light option may look like after downloading.

Nothing of this is new

If you've searched Google for "organize spotify" before, you've most likely already come across Spotify's own Paul Lamere with his brilliant, open-source Music Library Organizer. Although not nearly as feature-rich as Paul's Swiss Army Knife, this demo provides a guideline in a state-of-the-art setup with React.js, Redux and Typescript - A stack most web developers are familiar with. With this demo, I hope I can give others a guideline on how to talk to Spotify in a slightly more modern way and offer anyone the possibility to easily download their library data.

The whole demo is open source. Here's the code along with a readme that includes some important notes regarding privacy and what happens with your data. If you don't trust the public demo, that's totally fine. Just grab a copy of the source and run your own Spotify app locally.

Originally published in February 2021 on my personal website and blog, eric.film.

What are the uses of JavaScript

Time to say goodbye to Webpack?