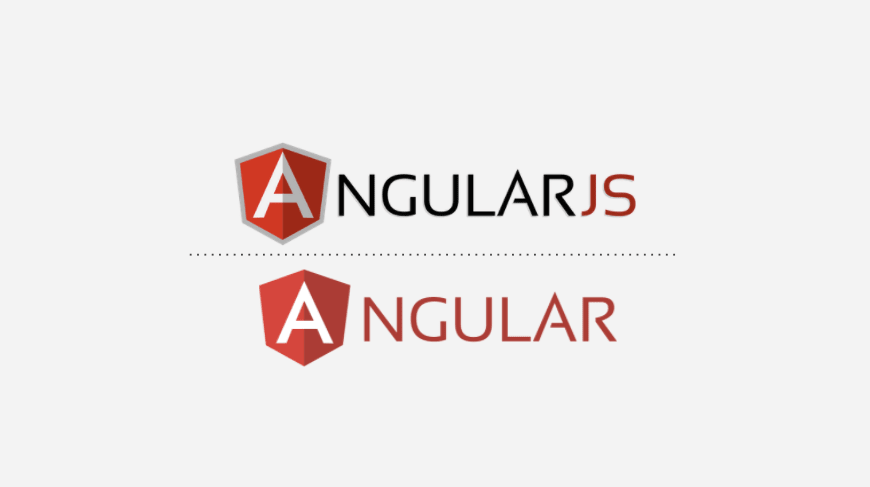 If you are interested in learning Angular, it is crucial to have some understanding of the differences between AngularJS and Angular to avoid confusion. That's right, AngularJS and Angular are not the same frameworks. On the contrary, they have some huge discrepancies. This article will guide you through the most important points diverging AngularJS from Angular, so you can start your journey on learning Angular on the right foot.

Let's start by saying that AngularJS, also known as Angular 1, is the father of Angular. AngularJS was released on Oct 20, 2010 by Angular's team at Google. Considered the framework pioneer in generating interactive HTML pages, it became popular very quickly. However, the release of other frameworks exposed its drawbacks and turned away AngularJS's spotlight.

The arrival of ReactJS and VueJS to the market made clear the competition for the best performant framework. Given the situation, Google's team decided to rewrite Angular completely. On Sep 14, 2016 , Angular 2 was finally released, revealing some drastic changes in the framework. Language, Architecture and Data binding were some of the aspects that changed from AngularJS to Angular 2.

Angular team’s first decision was to shift from JavaScript to TypeScript to avoid some JavaScript's pitfalls. It was also a way of presenting a more organized and maintainable code. The advantage of using Typescript is that it still has JavaScript but it is better. It can be described as a strict syntactical superset of JavaScript which provides static typing during development. In simple words, static typing improves performance and avoids runtime pitfalls that were causing problems in AngularJS. Most importantly, TypeScript transpiles to JavaScript. 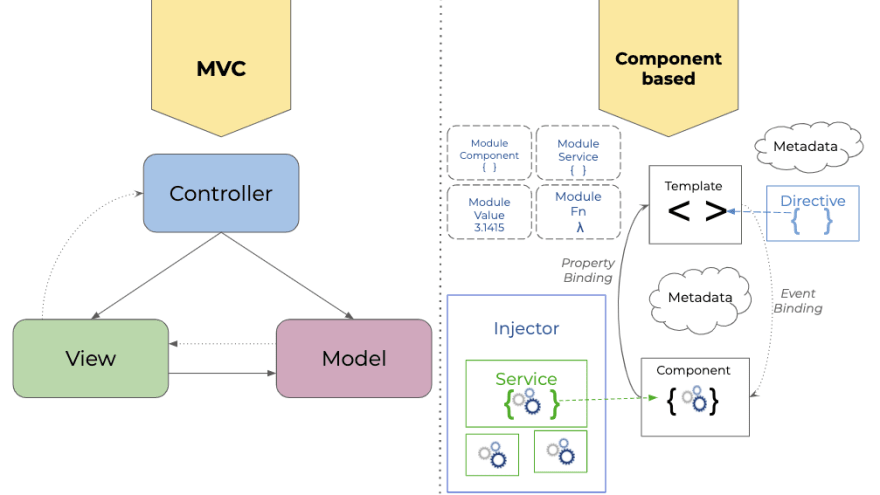 The main characteristic of AngularJS's architecture is that it supports the MVC (Model View Controller) architecture. On MVC, the logic, the output and the display of the information happen in separate files. The business logic goes in the "Model", the output in the "Controller" and AngularJS processes it all and generates the "View" that will display the output. On the other hand, Angular relies on Component-Based architecture. Essentially, this architecture is composed of components that are directives with predefined templates. This modern structure allows us to scale and maintain large applications. 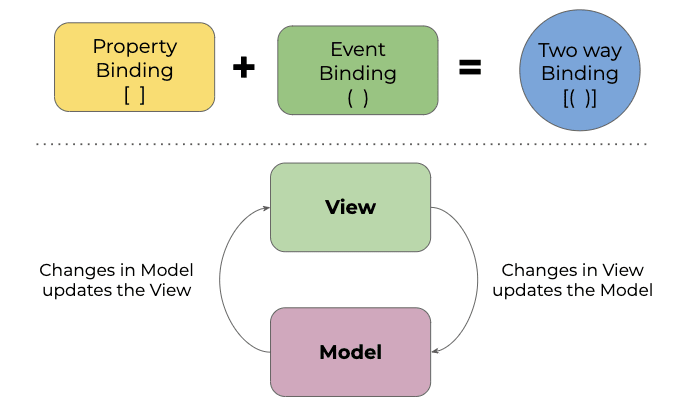 AngularJS two-way data binding is a unique way that immediately propagates to the "View" any data changes that can affect the "Model", and changes made by users in "Views" immediately reflect the "Model". In simple words, every time the data changes, the UI changes and vice versa. It allows faster data binding and do not depend on the intervention of developers. In Angular, a better algorithm makes it five times faster than in AngularJS.

CLI, Syntax and Mobile Support
More than the previous 3 aspects, Angular got additional features that were not present in AgulasrJS, such as a CLI (Angular CLI) which is mainly used for efficiently generating components and services; new syntax, by using expressions with parenthesis ( ( ) ) and square brackets ( [ ] ) instead of the ng directive for binding properties or events; mobile support which can put AngularJS far behind in the competition as best framework nowadays.

Versions, Releases and Support
After Angular 2, Google released Angular 3, 4, 5, 6, 7, 8. The last version, Angular 9, was recently launched on February 06, 2020, and is still in the active support stage, a 6 months support during which regularly-scheduled updates and patches are released. Then it will be followed by 12 months of long-term support (LTS), during which only critical fixes and security patches are released. Major releases are done every 6 months, each one of them with 1-3 minor releases. All major releases are supported for 18 months.

Whether you decide to learn AngularJS or Angular it is essential to know that both of them have considerable differences. Some developers would recommend AngularJS while others would recommend Angular. The most important is to know which framework can attend all the requirements you envision for your project. Despite the time since its release, AngularJS is still out there doing a good job, but here’s a heads up: It is expected that AngularJS support will be maintained until June 30, 2021, after that Google will no longer maintain the library and will be recommended to use Angular2 or a higher version. Additionally, if you plan to grow in scalability and to release a mobile version of your project, you definitely should go with Angular2 or a higher version. I hope you find this post helpful.

👩‍💻Full-stack web developer with a desire to develop, create, and optimize user-friendly, feature-rich apps and websites.✨

Testable code with VueJS and TypeScript

How to Create a Simple React Countdown Timer

How to Config React Project with Next.js, Typescript, TSLint, and Jest?

Evelyn Bauer
👩‍💻Full-stack web developer with a desire to develop, create, and optimize user-friendly, feature-rich apps and websites.✨
I had to learn Angular 8 in 24 hours, here is how
#angular #typescript #javascript #beginners