Even though the WebAIM Million analysis came out in February 2019, I found nothing on it reported here on dev.to, and this has been in my drafts for about a week. But I'm posting this now, because yesterday I saw a twitter poll by @amber1y with some sad numbers about it's reach. Front-End professionals need to know about the state of their web. 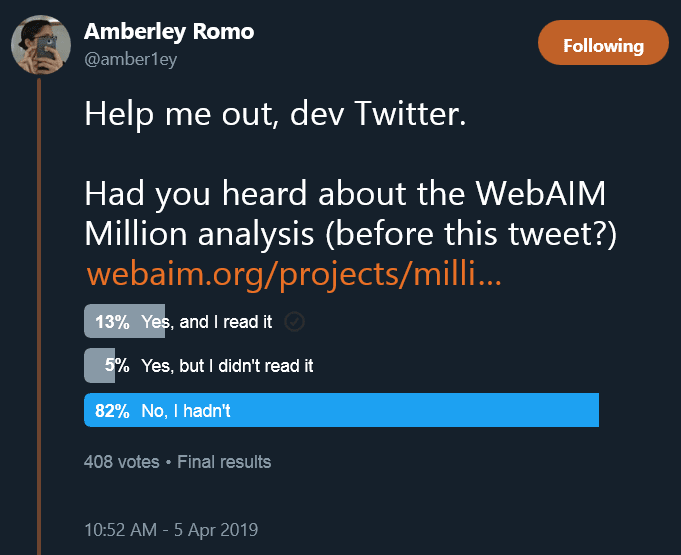 Do you remember 2008? A possibly simpler time, I myself was young teenager years old. I was still in total awe of all the things the iPhone, purchased by my father on Day 1, could do. From what I have read about web development at the time, it seems drastically simpler. The devices being made for were still primarily desktops, things like progressive enhancement had yet to be realized, IE 7 was browser du jour.

Please keep that in mind as you follow along with me on looking through what is probably the most depressing set of web statistics I have ever seen. My passion almost from day 1 of my education has been accessibility, and this has me and many others somber and introspective.

If you've ever used Lighthouse Accessibility audits or similar tools, you know that detectable issues tell only a portion of a websites accessibility story. So this is the benefit-of-the-doubt, best-case-scenario data; what their WAVE API could detect doesn't begin to tell the full story.

Now, I'm not now, nor have ever been employed in this industry. I understand through the 9 months of self-taught education I have that this is a huge, multi-discipline issue. However, this is a pressing issue. The amount of users who are omitted from internet content on a daily basis is staggering, and I promise you that members of this population are not strangers to you. Even if they are, that shouldn't matter. This is not conducive to the free and open internet it should be.

On behalf of me and so many others, please look into these issues. Take a look at what Lighthouse or the Level Access Auditor says about your sites. Ask questions, get feedback, try some assistive technologies yourself! Try and keep the fact that we haven't reached a 3% implementation rate an 11 year old standard the next time you reach for yet another pretty piece of tech.

Have you checked your color contrast ratios lately?