My Experience Building A Chess App In React

Hi, my name is Fred and I’m a chess player who has been learning to code using The Odin Project for the past 10 months. After gaining some familiarity with React, I thought it would be a fun challenge to try and build a chess application using React. I'm also interested in finding my first job as an entry level developer and would love to chat with anyone who is hiring or has suggestions on getting into the field.

What the App Does

1. Supports All Basic Rules of Chess 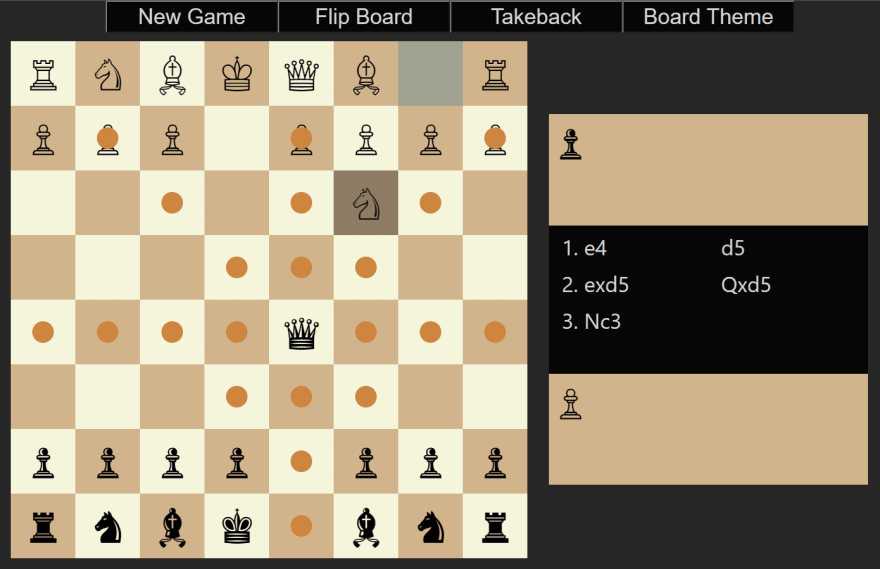 b. Castling is supported in either direction, and cannot be done if either the king or corresponding rook has moved, or if the king is in check or would move through check.

c. En passant, which proved to be one of the most challenging aspects of the game to program due to the amount of conditionals that must be met.

Per the Wiki link:

d. Checkmate: When the attacked king’s army has no means of salvaging their leader.

d. Changing board themes: LOOK at those pretty colors

How The App Is Built

a. The Board Class
The board is represented in a 2d array of “square” objects, each with a unique coordinate and the presence or non-presence of a piece (which are themselves objects).

The board has a large variety of methods to manipulate itself and to gather information about the current board position...

b. The Piece Classes
Each type of piece has its own class that is capable of

It wasn’t until I started writing the logic for determining king moves that I realized just how distinct these two things were. For example: 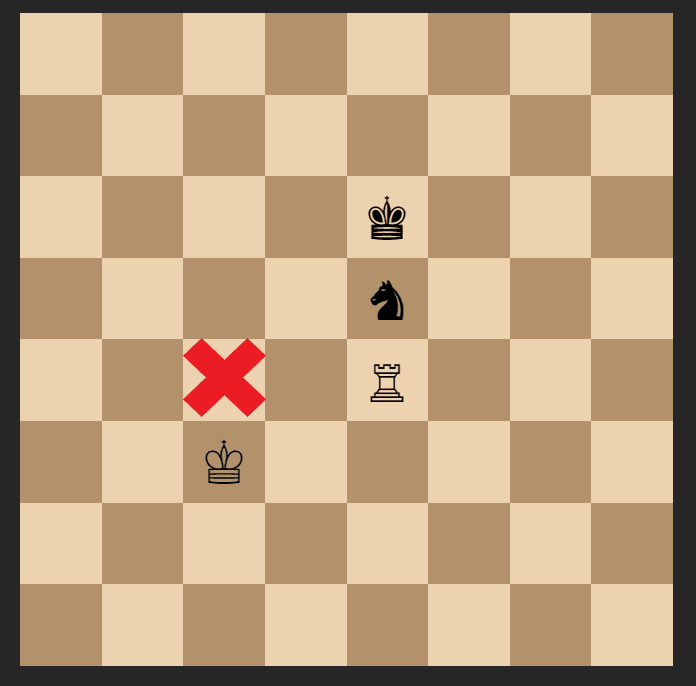 Therefore, each piece has a unique method for each case. In either case an array of coordinates is returned.

A Shared Search Method for Long Range Pieces:
I discovered that the Queen, Rook and Bishop had similar patterns for finding possible and controlled squares. All of them are capable of moving as many squares as possible in a given direction until:

Each piece simply needs to pass in the directions that they are capable of...

directions that are not included will be skipped over immediately

c. End of Game Detection
Currently, the game is capable of detecting checkmate and stalemate.

The game detects an end of game by running a function that determines all of a player’s possible moves. The check detection method returns a boolean of whether a king’s square is contained in the opposing player’s attacked squares.

The App function contains the following components, all of which rely on the data from the Board Object to determine what to render.

The chessboard is contained by a BoardUI component, which uses the data from the Board classes 2d array of squares to render the current position.

The board is displayed using an HTML table. Squares containing a piece display the piece’s symbol and when a piece to move is selected, its possible move squares are given a colored element to highlight them.

An issue I ran into in my code dealt with the nature of how React knows when to update the interface. Although the Board object is very good at mutating itself, React won’t know to update because the object that is being referenced is the same. This forced me to create a method on Board that returns a copy of itself...

which could then be passed in for state changes...

However, this extra step does not really take full advantage of React. Taking a more functional approach to writing the methods in the Board class could remove the need for this. If I end up doing a large scale refactor of this project, I believe this would be a great opportunity for improvement and chance to make the best use of React’s capabilities.

A nested conditional component within BoardUI...

The BoardUI component also contains a conditionally rendered PromotionModal component, which relies on the BoardUI’s state to render the appropriately colored pieces as a pop-up

Positioning this just the way I wanted took some effort, and I finally landed on making use of CSS calc() function and CSS variables to achieve my desired effect.

a. New Game: Sets game to initial game settings, then sets the App’s state to a copy of that board

b. Flip Board: Checks player currently at bottom of screen and rearranges the game’s squares in reverse order:

This was by far my favorite coding project that I’ve worked on so far. The combination of my own personal love of chess and the challenge of accounting for all the complexity and nuances of the game was difficult but equally rewarding. Some things I’d consider adding at this point are:

If I were to go back in time in my coding journey I think I would have attempted to start this project sooner than I did. Learning from the mistakes that I made during this project has helped me grow tremendously and I’m excited to continue building and see what I pick up along the way. Feel free to e-mail me if you're someone looking to hire a new dev!