Over the past year, I've been building something. It's actually something awesome that a lot of people enjoy: the Vue Vixens community. When I launched this initiative on the stage of Vue Amsterdam's massive Vue.js conference in February 2018, I had no idea 1) how excited people would be about it, 2) how fast it would take off, 2) how I was actually going to get it going. In February, I basically had a logo and a dream. I only had the rudiments of a social media strategy fleshed out, and no clear idea how I was going to build the critical content that would take the project from zero to the Emerald City. Now, in December, I can talk about how my team coalesced into a formidable source of pure positive energy, the likes of which anyone in Silicon Valley would envy.

Get ready to follow the Yellow Brick Road with me as I talk a bit about how I built a tight-knit technical team based on what I call the Emerald City Principle.

When you think about it, the story of the Wizard of Oz is an allegory, and it's all about team building. Lost and scared, the heroine of the story finds herself alone in a strange land, armed with nothing but a positive attitude and a cute dog. She also acquires ruby slippers, but she doesn't realize that they are the essential element for the successful conclusion to her journey. You can look at the slippers as the key to Dorothy's success, the use of which she has to learn via interactions with her team.

It's a lot like having a great idea for a product or a community, without knowing how to get it off the ground. Gradually, over the course of the story, the heroine learns how the various elements of personal success - intelligence, strength, bravery - must come through self-realization, and are critical to the successful conclusion of the journey. By the end of the team's long journey, each team member has realized that their particular gift contributes immeasurably to the success of the endeavor, and that their quest to acquire their gift (brains, a heart, courage) led to the realization that they always had such a gift, just unrealized.

It's the journey to the Emerald City, and the tests that transpire there, that help unlock this self-realization.

Not only is the journey a critical element in the formation of the team as a coherent whole, the members who join the team are crucial to its success. Bravery, heart and brains, represented by the Lion, the Tin Man, and the Scarecrow, all represent crucial elements of a successful team. Let's take a look at how the Vue Vixens staff represents these elements.

The minute I got off the stage of Vue Amsterdam, I had a moment of panic. I had had just promised to launch an epic series of workshops paired with major technical conferences while HAVING ABSOLUTELY NO CONTENT WRITTEN. What had I just done? A cool logo and an excited community does not a valuable offering make. It's like when Dorothy walzed off along the yellow brick road cheered on by a pack of Munchkins. It feels good, but you risk getting lost or injured in short order, and Munchkins are notoriously unreliable. In addition, those flying monkeys are no joke!

By March, it became clear that, while I had an idea what the workshops would look like in terms of content, I didn't have the wherewithal to write them, especially for the web. I needed a solid Vue.js developer who could take the initiative and just run with it, as a technical partner. I reached out to someone who had engaged with our Twitter account and who had a rock solid GitHub portfolio: enter the brains of the operation...Natalia.

The awesome thing about Natalia is watching her evolve over the past months as her profile gets increasingly prominent in the Vue.js community. It's been pure pleasure watching her catapult from writing a few workshops into becoming an international speaker and contributing to the Vue.js core. I predict tremendous career growth at GitLab for this most awesome Scarecrow! Similar to that figure, Natalia has grown into her profile, realizing her leadership role both in this organization and in the larger Vue.js community. I can only wish such a powerful technical lead to any Silicon Valley startup!

Your team may have a leader and brilliant technical talent, but where are you without heart, without a true people person who can gather contributors and allies like a moth to the candle? My very favorite Tin Lady, Diana, is the heart of our organization. Like Natalia, she came to help, and it became abundantly clear that her special talent was building community and gathering groups of Vue Vixens worldwide. So talented is she at organizing events and people that we held our first day-long Vue Vixens Day in Buenos Aires, Argentina in July, a smashing success that reverberated throughout South America.

Because of Diana and her heartfelt support building the initiative, she actually helped steer it in a new direction. It became clear that running workshops alongside big tech conferences works well in areas such as North America and Western Europe, but what about areas of the world where there are fewer conferences? How can we reach our audience in the smaller companies and startups in places like Mexico, Peru, or Uruguay?

Enter our chapter leaders, the pack of Cowardly Lions who complete our amazing team!

Our Not-So-Cowardly Lionesses: The Chapter Leaders

Like an awesome pack of fierce lionesses, our amazing chapter leaders round out the strength of this team. 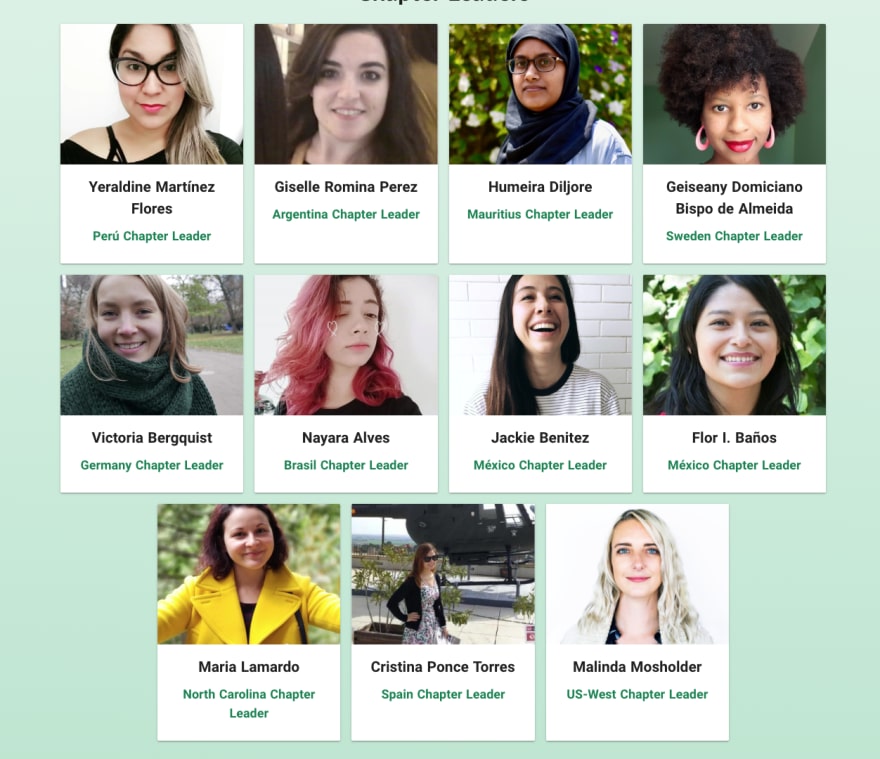 It's been a fascinating exercise to help these women learn their own strength. Bravely performing community outreach where often there is pressure against this type of initiative, the Chapter Leaders are each learning how very brave they really are. I tap my ruby slippers appreciatively in their direction. Queens of the jungle, they are adapting the initiative to the needs they encounter on the ground. Whether speaking in a DevFest in Mauritius or hosting a special Vue Vixens Posada in Mexico City, the courage these women display, sometimes in the face of hostility, is breathtaking.

Too far, you say? Gone off the deep end again, Jen, you say? I encourage you to think about your own company's team. Who are the leaders in your organization who exemplify the four 'types' embodied by the four main characters traveling through Oz? Is someone missing? Is someone duplicated? What are the ramifications? I'm curious to hear your thoughts in the comments below. And thank you, Vue Vixens community and allies, for your awesome support as we continue to travel towards our personal Emerald City, learning about ourselves as we travel.

Jen Looper is a Google Developer Expert and a Cloud Advocate Lead at Microsoft with over 20 years' experience as a web and mobile developer, specializing in creating cross-platform web & mobile apps.

An Outside Look in at Building a Great (Dev) Team

The touch of the "master's" hand.. in a tough tech world!

Trending on DEV
Where to Find Remote Developer Jobs 🏝️
#career #codenewbie #webdev #beginners
In your opinion, what makes a successful employee?
#discuss #career #productivity #watercooler
Is programming an art?
#discuss
What's something you're currently learning?
#discuss #tutorial #javascript #beginners
When starting a new project, when wouldn't you want to build in a cloud?
#discuss #watercooler #architecture #cloud
Which hosting do you use?
#webdev #aws #javascript #discuss
How much do YOU pay per month for cloud hosting?
#devops #discuss #webdev #healthydebate
Bilingual Devs What Language Are You Thinking in?
#discuss