"This specification (Web Share API) defines an API for sharing text, links and other content to an arbitrary destination of the user's choice."

While the official Web Share API definition does not sound too exciting, this new feature actually offers a solution to a problem web developers have been facing for a decade.
This new API provides a way of using the native "share" feature of the browser or operating system via JavaScript, allowing users to seamlessly share a piece of content from the browser the same way they would from a native application.

No more need for (often) bloated and (sometimes) nosey third-party share "plugins" and their endless lists of social media icons? Well, we are not quite there yet, but let's see how we can already use this new Web API to our advantage.

This API consists in two methods that were added to the navigator object, share() and canShare(). Both receive a ShareData dictionary, containing information to share from the current page to another service, picked by the user from their installed apps list.

It is important to note that, because they are sensitive by nature, none of these methods can be used on a non-HTTPS web page. While implementations may vary, this aspect is part of the specification.

The nature of the dictionary that navigator.share() uses, called ShareData, is pre-defined as to ensure interoperability, and looks as follow:

The ShareData object - in theory - cannot hold anything besides title, text and url. However, the current specification does not suggest a limited length for text, and it is therefore likely possible to pass stringified JSON or base64-encoded content to it. Whether it's a good idea or not is a whole other debate (Spoiler alert: it's probably not).

navigator.share, which takes this dictionary as a parameter, returns a Promise that will be pending while the user makes their choice. 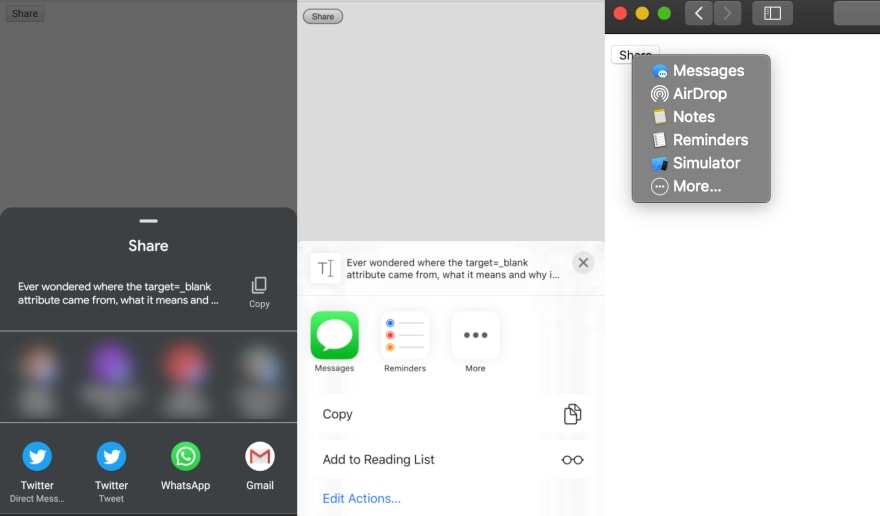 Interestingly, it appears to be possible to distinguish an exception that arose because the share feature failed or because the user cancelled the action: Safari currently raises an AbortError upon cancellation. 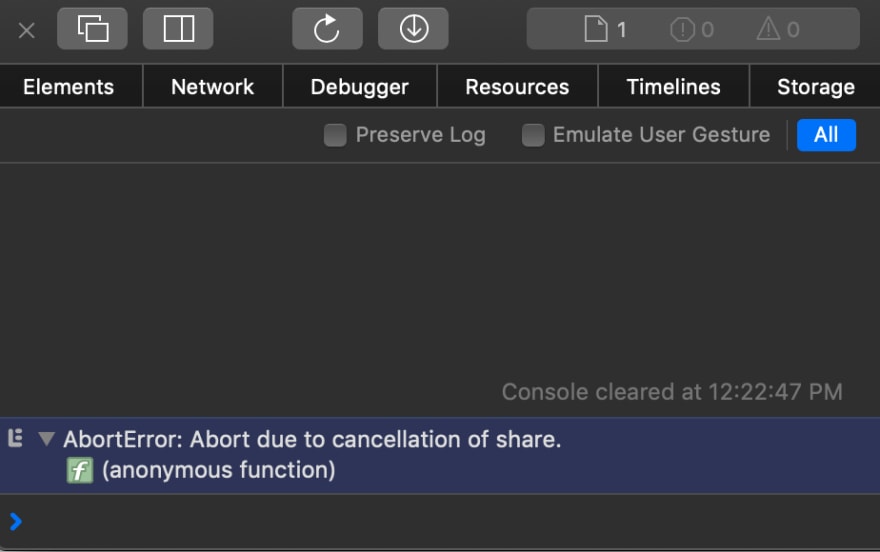 In addition, part of the early Web Share API Level 2 specification draft, the navigator.canShare method allows to make sure a ShareData dictionary is suitable for sharing before making a request.

Using canShare makes a lot of sense in that context.

Receiving shared data in your PWA

Through the very experimental Web Share Target API, it is possible to build progressive web apps able to receive that type of information simply by using manifest.json, which makes the Web Share API all the more powerful.

I recommend Google's Web.dev guide on the topic.

While in the works since 2016 and still experimental, the standardization process of that feature seems to be making good progress, with a first public working draft released last December.

Current support for navigator.share makes it more than usable on mobile, with iOS Safari, Chrome for Android and Samsung Internet already Web Share-ready, according to caniuse.com.

Support for navigator.canShare is much more limited, as only Chrome for Android supports it at the moment.

As usual, progressive enhancement is key here to start using these new features:

The Web Share API is one of these features that helps breaking the barriers between web and native and that, while still in the works, can bring immediate improvement to how users experience the products we build: use responsibly, but surely use it 🎉.

What is the Virtual DOM in React?

JavaScript from ES6 to Today

Kraken Clone Script-Everything that you should know about kraken exchange

We design, build and consult on applications and websites.

Our website
HTML postmortem: frameset and its legacy
#webdev #html
Using CSS viewport units (vw, vh ...) for font sizes can be tricky
#css #webdev
Why semantic HTML matters and how to become better at it?
#webdev #html #css #standards