I mentioned EtherCalc in a previous post and managed to scrounge some time to put together a fledgling {ethercalc} package (it’s also on GitLab, SourceHut, Bitbucket and GitUgh, just sub out the appropriate URL prefix).

I’m creating a package-specific Docker image (there are a couple out there but I’m not supporting their use with the package as they have a CORS configuration that make EtherCalc API wrangling problematic) for EtherCalc but I would highly recommend that you just use it via the npm module. To do that you need a working Node.js installation and I highly recommended also running a local Redis instance (it’s super lightweight). Linux folks can use their fav package manager for that and macOS folks can use homebrew. Folks on the legacy Windows operating system can visit:

I also recommend running EtherCalc and Redis together for performance reasons. EtherCalc will maintain a persistent store for your spreadsheets (they call them “rooms” since EtherCalc supports collaborative editing) with or without Redis, but using Redis makes all EtherCalc ops much, much faster.

Once you have Redis running (on localhost, which is the default) and Node.js + npm installed, you can do the following to install EtherCalc:

The -g tells npm to install the module globally and will work to ensure the ethercalc executable is on your PATH. Like many things one can install from Node.js or, even Python, you may see a cadre of “warnings” and possibly even some “errors”. If you execute the following and see similar messages:

and then go to the URL it gives you and you see something like this: 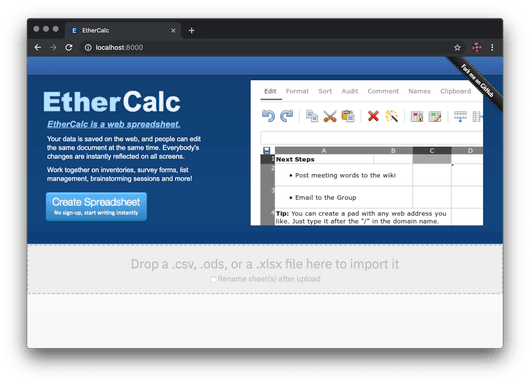 then you’re all set to continue.

EtherCalc has a wiki. As such, please hit that to get more info on EtherCalc. 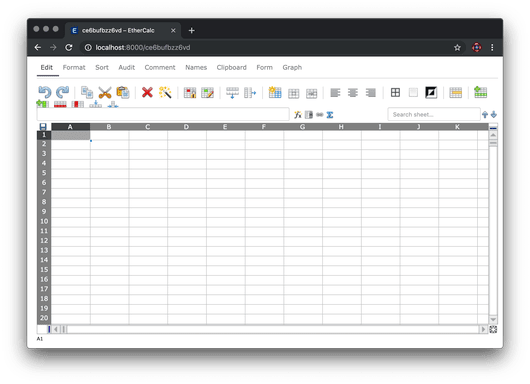 If you start ethercalc without the --host=localhost it listens on all network interfaces, so other folks on your network can also use it as a local “cloud” spreadsheet app, but also edit with you, just like Google Sheets.

I recommend playing around a bit in EtherCalc before continuing just to see that it is, indeed, a spreadsheet app like all the others you are familiar with, except it has a robust API that we can orchestrate from within R, now.

You can install {ethercalc} from the aforelinked source or via:

where you’ll get a binary install for Windows and macOS (binary builds are for R 3.5.x but should also work for 3.6.x installs).

If you don’t want to drop to a command line interface to start EtherCalc you can use ec_start() to run one that will only be live during your R session.

Once you have EtherCalc running you’ll need to put the URL into an ETHERCALC_HOST environment variable. I recommend adding the following to ~/.Renviron and restarting your R session:

(You’ll get an interactive prompt to provide this if you don’t have the environment variable setup.)

You can verify R can talk to your EtherCalc instance by executing ec_running() and reading the message or examining the (invisible) return value. Post a comment or file an issue (on your preferred social coding site) if you really think you’ve done everything right and still aren’t up and running by this point.

The use-case I setup in the previous blog post was to perform light data entry since scraping was both prohibited and would have taken more time given how the visualization was made. To start a new spreadsheet (remember, EtherCalc folks call these “rooms”), just do:

And you should see this appear in your default web browser: 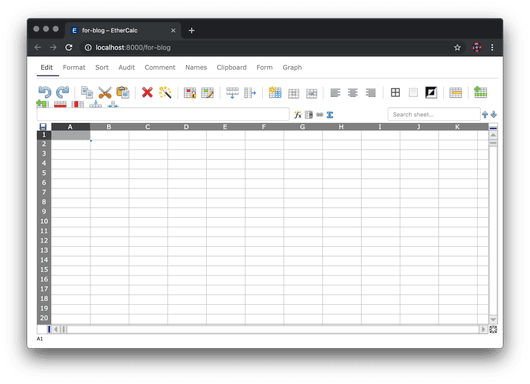 You can do ec_list() to see the names of all “saved” spreadsheets (ec_delete() can remove them, too).

We’ll type in the values from the previous post: 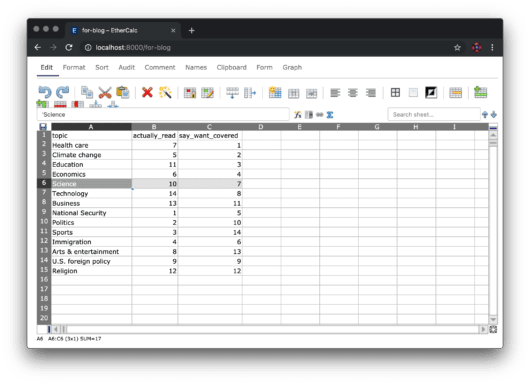 Now, to retrieve those values, we can do:

That function takes any (relevant to this package use-case) parameter that readr::read_csv() takes (since it uses that under the hood to parse the object that comes back from the API call). If someone adds or modifies any values you can just call ec_read() again to retrieve them.

The ec_export() function lets you download the contents of the spreadsheet (“room”) to a local:

file (and it also returns the raw data directly to the R session). So you can do something like:

You can also append to a spreadsheet right from R. We’ll sort that data frame (to prove the append is working and I’m not fibbing) and append it to the existing sheet (this is a toy example, but imagine appending to an always-running EtherCalc instance as a data logger, which folks actually do IRL): 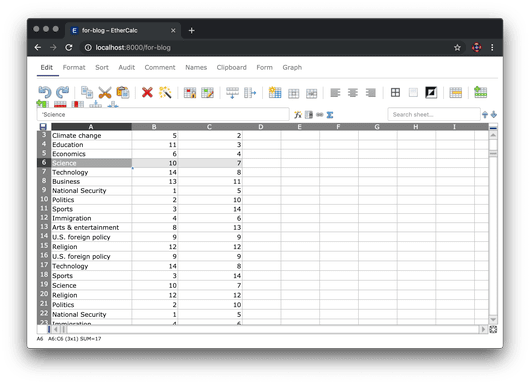 Note that you can open up EtherCalc to any existing spreadsheets (“rooms”) via ec_view() as well.

It’s worth noting that EtherCalc appears to have a limit of around 500,000 “cells” per spreadsheet (“room”). I mention that since if you try to, say, ec_edit(ggplot2movies::movies, "movies") you would have very likely crashed the running EtherCalc instance if I did not code in some guide rails into that function and the ec_append() function to stop you from doing that. It’s sane limit IMO an Google Sheets does something similar (per-tab) for the similar reasons (and both limits are one reason I’m still against using a browser for “everything” given the limitations of javascript wrangling of DOM elements).

And, while you should avoid hand-wrangling data at all costs, ec_edit() is a much faster and feature-rich alternative to R’s edit() function on most systems.

I’ve shown off most of the current functionality of the {ethercalc} package in this post. One function I’ve left out is ec_cmd() which lets you completely orchestrate all EtherCalc operations. It’s powerful enough, and the EtherCalc command structure is gnarly enough, that we’ll have to cover it in a separate post. Also, stay tune for the aforementioned package-specific EtherCalc Docker image.

Kick the tyres, contribute issues and/or PRs as moved (and on your preferred social coding site) and see if both EtherCalc and {ethercalc} might work for you in place of or along with Excel and/or Google Sheets.

Remote Work is Here to Stay: Navigating the Future of Software Development

Once suspended, hrbrmstr will not be able to comment or publish posts until their suspension is removed.

Once unsuspended, hrbrmstr will be able to comment and publish posts again.

Once unpublished, all posts by hrbrmstr will become hidden and only accessible to themselves.

If hrbrmstr is not suspended, they can still re-publish their posts from their dashboard.

Once unpublished, this post will become invisible to the public and only accessible to boB Rudis.

Thanks for keeping DEV Community 👩‍💻👨‍💻 safe. Here is what you can do to flag hrbrmstr:

Unflagging hrbrmstr will restore default visibility to their posts.