Debugging applications is never an easy task, even for experienced developers. It usually involves some obscure configurations and varies from editor to editor/IDE.

Thankfully, modern IDEs and code editors such as VSCode and Webstorm make this task way less painful but the debugging process can still be hard if one has his app process running inside Docker containers. Nevertheless, this challenge can be overcomed and is worth due to the many benefits of running a dockerized application.

Modern applications may have complex requirements such as many services dependencies, e.g., databases, message brokers, cache services, etc. In the past, if one wanted to locally run such application, that would be a nightmare! The developer would have to:

Anyone who had had to configure these services knows that this consumes a lot of time!

Fortunately, these problems are gone thanks to Docker containers! From the Docker docs:

A Docker container image is a lightweight, standalone, executable package of software that includes everything needed to run an application: code, runtime, system tools, system libraries and settings.

These containers are lightweight, standalone, executable package of software and runs quickly and reliably from one computing environment to another.

This means that by running a docker container we can quickly have an isolated computing environment that meets our applications requirements! Moreover, this same environment that can be run on your local machine will be the same that will be run, for example, on your cloud service provider such as Google GCP, Amazon AWS, Microsoft Azure, etc!

However, why should we run just a single Docker image? One application may have many services dependencies! How can we handle that?

Docker Compose is the answer! It's a tool that uses YAML definitions to run multi-container Docker applications. This means that with a few commands the developer can build an entire infrastructure to run his application locally on his host machine!

Moreover, there are many pre-configured images such as MySQL, RabbitMQ, ActiveMQ, Redis, etc. that are ready to run!

Here's a sample docker-compose file used to build a Typescript application together with a database service:

In this docker-compose file, we specify:

Now we can build and run our application and its required services:

Here's a simplified diagram of how do Docker containers work:

We can note a couple things here:

To sum up: with a few commands and couple seconds, one can set up a complex infrastructure with many services (databases, brokers, etc) to start developing locally! So if you still code in the old dark era without Docker containers or other virtualization solution: STOP RIGHT NOW AND SAVE SOME TIME: Build dockerized applications!

Now, running our code on Docker containers also bring some challenges! How can I debug my applications that are not really running as a process on my machine's OS?

First things... first! Let's learn how does a typical remote debugging solution looks like as this will make understanding a debug configuration easier:

The main idea behind debugging a Dockerized application is:

Here comes another challenge: we can't just simply run the typescript app together with its debugger... one must first transpile the TS files to JS files and then think about running the app with NodeJS!

So, here's the whole debugging strategy:

This debugging strategy is illustrated as follows:

Note that we transpõe the ts files with source maps so that breakpoints set on the TS code gets set correctly on the output JS code!

Before we start creating our VSCode debugging configuration, let's first take a look at the package.json file that contains the required commands to transpile, watch and debug our applications:

Here we have defined the following commands:

Now that we have created different forms of running our project and transpiling our project with tasks, we can now configure our TS compiler options with tsconfig.json.

To configure the TS compiler one must create a tsconfig.json. The important part of this config is where we set sourceMap option as true to be able to use breakpoints on the Typescript code (not on the transpiled JS code - which is ugly)!

The other configurations can be changed according to the project needs such as the outDir, include:

Now we need to create a task on VSCode to be able to transpile the files before actually debugging the application!

VSCode allows users to create tasks that can be run before and after project runs.

The task is explained as follows:

VSCode project launch configurations/debugging processes can be configured by creating a launch.json file! This final step connects everything required for the debugging process to work:

Here we'll define a launch config of type node as a launch request (launch requests are used to start the app process and not only to attach to a running app debugger):

The following part defines the command that will start your application:

The runtimeExecutable and runtimeArgs will invoke the command debug defined in the package.json INSIDE the docker container (remote debugging)!

The preLaunchTask defines the process that will the transpiling process as a background task:

So every time we change a TS file, it'll be compiled to JS and nodemon will restart the whole process!

Some other import configs to notice:

After saving this config on launch.json, one just has to select the Docker launch debugging and click play to start debugging in the docker container!

Here's a screenshoot of breakpoint being hit: 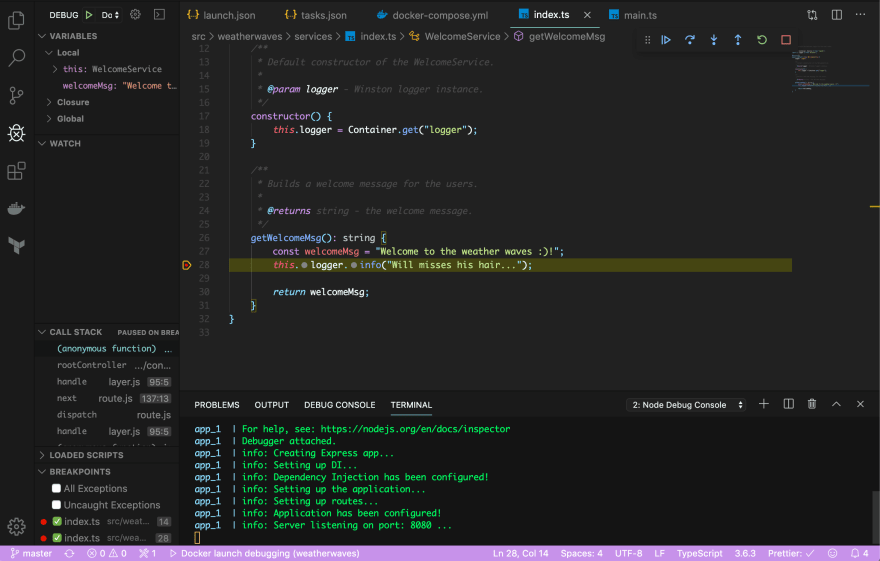 And after changing a TS file (changed logger message) we can see that the TS file was transpiled again and that the debugger is reattached to the remote container again: 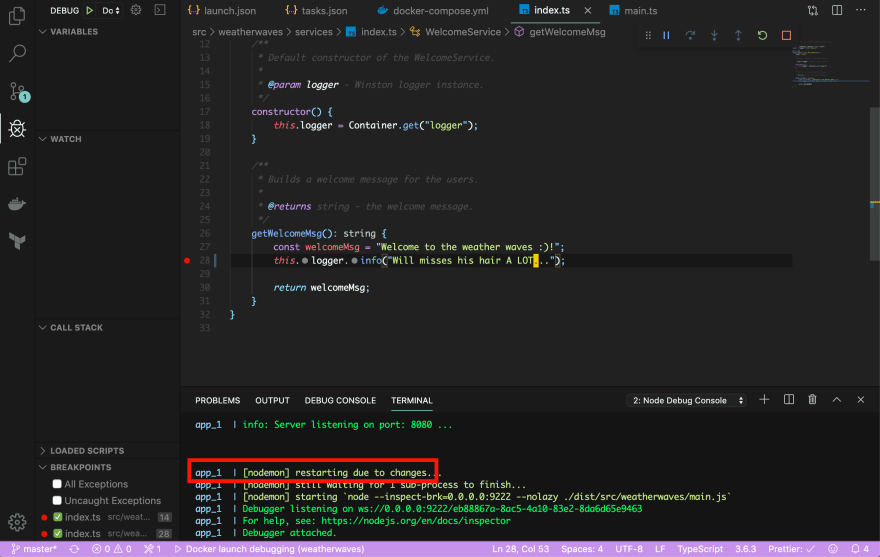 Hope this post helps anyone who's having some trouble setting debuggers on remote containers! A similar config can be used to run your tests, too! Just run mocha or other test runner with the debugger API listening on a specific port that is also exposed by the docker-compose file!

Let me know if you have any doubts or need any help! But the next things are for sure...

Will really improve your development workflow and make you become a better developer! See if you can create a similar debugging process for running your Typescript tests (I'll cover it on a future post)!