Ever thought about sending a Dick pic to someone? Here are some top tips and examples for getting it right and not offending people when you do.

These are the sort of pictures women in tech want to see, not the ugly and offensive things you have been sending them without asking!

If pictures of Dicks offend you then you should probably leave (but I have no idea why they would!).

Look nobody wants a blurry picture of a Dick, we want to see Dicks in all of their glory.

Here is a great picture of a Dick that would be welcomed in any DM.

Notice the long hard shaft in his hand, that is what people want to see!

This Dick has to be one of my favourites in this list. If you have never come across this Dick, then you are in for a real treat!

I am sure you will watch many videos with this Dick in now, and I hope you share similar Dicks with others.


3. A bald Dick is not always best

Here is an example of a bald Dick that would not be welcomed in most DMs.

Be careful which Dick picks you share, some of them may still be offensive!


4. Some people even enjoy pics that aren't human

Sometimes people want some non-human picks in their DMs.

Don't worry I have you covered there too.


Yes this is satire!

The above are acceptable Dick pics to send people, and even then DMing people without them asking and without a good reason is not advised.

This article was originally prompted as I saw 3 tweets in the space of 4 days from women (assumed gender) who were complaining about receiving unsolicited pictures of penises.

While this may be a silly post the message is important.

Don't send unsolicited pictures of your penis to anybody, end of discussion.

It is vile behaviour.

So now you have a) know how to behave properly on tech Twitter, you should b) go do something productive and stop reading my silly articles!

You are brave for releasing this

I wasn't going to, I wrote it in August and thought I may have crossed a line.

But in the back of my head I thought it might cheer some people up so was torn.

In the end I asked Twitter what to do: 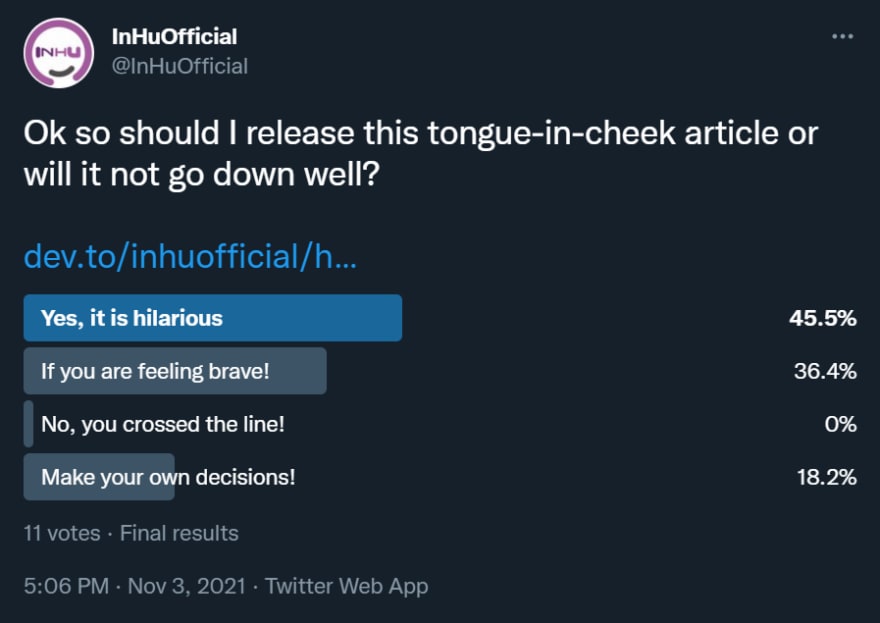 And obviously nothing ever went wrong listening to the Twitter crowd...so here we are!

Have a great weekend, I hope this article gave you a smile!

Want FASTER build time with Next.js? DO THIS! ⚡

WordPress vs Static HTML: Which is Best For 2022