I just remade my website for probably the third time this year. I used Next.js, React, Express, and lots of CSS to build this.

In this post, I'll show you how to do everything from the robot drawing animation to sending custom emails in NodeJS for free.

Oh and also, if you were previously following me, I changed my name from LeviathanProgramming (The golden dragon) to Ironclad Dev.

Literally, you could watch this animation for hours on end and not get tired of it. Or, at least I could.

The good news? It's not a gif, not a video, and does not require javascript to run!
It's plain SVG and CSS.

If you're wondering how I drew that, Boxy Svg is the best svg editor I've found so far. It's super easy to use, runs offline if you download the app, and lets you do so much more!

Oh, and if your free trial runs out, just copy-paste the svg elements.

Just to let you know, the svg has to be in raw svg form. It can't be an image url or css rules won't be able to apply.

Now let's write some css to style the svg element.

Triangular backgrounds can give an amazing-looking effect (I'm not bragging about mine!) to your website. They are extremely simple to make and will really amp up the look of your site.

Basically, what I did was create a grid container of 1x1 and stack divs on top of each other, each cut with clip-path.

The best editor for clipping element paths is https://bennettfeely.com/clippy/. Be sure to check it out!

Let's create the grid / parent element for all those sharp-looking divs as well as a few slant grid elements.

Let's style that and also style the elements that go within it.

I'm going to apply two different triangular slants and create something similar to what I did in my site.

You should be seeing something now! Looking nice already, right?

But wait...how will you add some content on top of that?
It's simpler than ever. Let's make another element within our grid element.

Your content box might not show up (since you didn't add css!) in front of all the others. I don't know why this happens. It just needs a bit of css styling and it's ready to go.

In this example, I'm going to be creating a simple react component with a bit of css styling for the fade-in effect. It's surprisingly simple and will really make your sites look better.

No pain in using a class-based component, eh?
Okay, so basically, this just renders a div element.
Let's move on to adding states and all those nice stuff into the constructor.

Now let's create an event listener and the listenToScroll method.

Okay, you might be wondering "Whoah, hold up there - Why is there a try...catch block?".
The reason is because sometimes this will, for an unknown reason, will complain about refs only being able to be done on class-based components and prevent javascript from working properly.

Okay, now that we've got that down, let's remodel the component's rendering.

Okay, so why would I add a classes prop? Well, in case you would want to style this element as a div in the future. I'll explain everything after we do the css fading effect styling.

I'm just adding the translation in the fade effects to that the elements will appear to move upwards when they fade in, which is optional.

To use the fade element, all you have to do is wrap some existing content with it and it will fade in for you.

If you want to style the fade container, you can pass some classes into it as shown:

For the blog, I just literally used the dev.to API. I almost decided to use hashnode, but decided I'd stick with dev.

All you have to do is fetch JSON data from the easy-to-use dev.to api endpoint, for example

It gives you enough information to make your own blog.

You can also get a specific article, but you shouldn't need that for your blog.

I'm a bit too lazy to be showing you how to fetch JSON apis. Just head over to this article over here I wrote in the past:
https://digest.repl.co/post/61a9497a5ffebb937a6577b4

And yes, I did make that digest tutorial site if you were wondering.

You won't get one of these unless you subscribe to me, but I thought I'd show you how to do it over here.

You can send custom emails from NodeJS for absolutely no cost at all! All it takes is a few npm packages, some authentication, and some css.

Important Notice - Make sure this is run on the server-side (NodeJS) and not the client side of JS (I'm talking to you thirteen-year-old devs out there)! 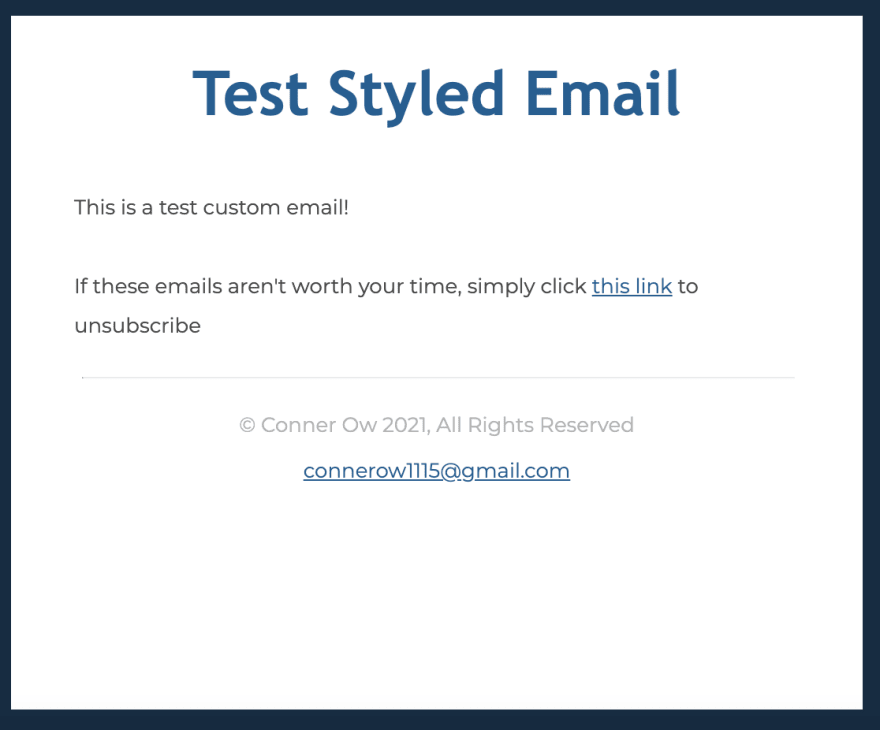 Nodemailer does the main emailing stuff and nodemailer-juice converts your css into inline css styling.

Why do you need nodemailer-juice? Well sadly, emails only support inline css and not css files or style tags. It's hard to believe, but it's true and probably won't change for a while.

I've created a simple mailing function. Make sure you put in your correct email credentials!

Don't forget to turn on Two-Step verification if you're using gmail and generate an app password for your email password. Otherwise, this won't work.

To send a custom email, all you have to do is pass in an html document as a javascript string into the sendEmail function. It can't be a file.

Here's a little template you can use for emails: https://replit.com/@IroncladDev/Noseletter

What I did to make email sending a bit easier was create a constant function and set it to the html body with a few arguments to edit the content.

Well, I guess that's all I have to say. If you have anything to say about my site, feel free to say it! Any criticisms will be appreciated.

Subscribe to my newsletter for new posts, new projects, recaps, and more!

Join my discord to get in touch and hang out!

Also, be sure to support this post with a couple reactions!

How to display a preview of an image upload in React

Once suspended, ironcladdev will not be able to comment or publish posts until their suspension is removed.

Once unsuspended, ironcladdev will be able to comment and publish posts again.

Once unpublished, all posts by ironcladdev will become hidden and only accessible to themselves.

If ironcladdev is not suspended, they can still re-publish their posts from their dashboard.

Once unpublished, this post will become invisible to the public and only accessible to IroncladDev.

Thanks for keeping DEV Community 👩‍💻👨‍💻 safe. Here is what you can do to flag ironcladdev:

Unflagging ironcladdev will restore default visibility to their posts.