A race condition is an undesirable situation that occurs when a device or system attempts to perform two or more operations at the same time, but because of the nature of the device or system, the operations must be done in the proper sequence to be done correctly.

You can read more about it here

It is a more common problem in software/language that leverage multiple processes. Two different processes that can change a data source at the same time can potentially cause race condition. But in the single-threaded world of Javascript, how can race condition happen?

They will execute from top down order, so the same lightbulb will change to red first and then blue.

But suppose you have two asynchronous functions that try to change the same lightbulb, here's where it gets funky: 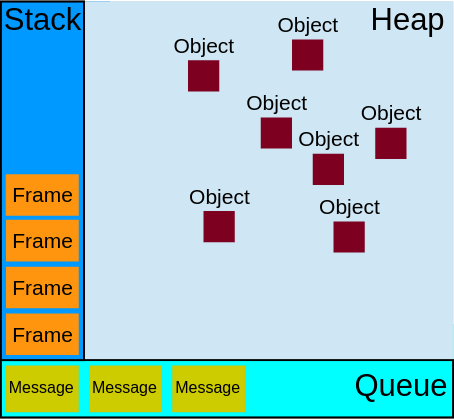 As you can see the diagram, the race can only happen inside the heap, but when it's handed over to the queue, they are executed in ordered sequence.

Here are a few scenarios for you to think about:

In reality, you never see it happen because what causes the "race" is external (aka the speed of the network that fires the asynchronous function) not from the system itself. Even if you find an example in reality where x === y, they all funnel into queue to be executed in order, so the nature of javascript can never execute two javascript functions at the same time. You can't really race with another human when you and the other person run in a one-man tunnel? That's why there's not an algorithm that ranks the order of execution in the world of Javascript when "race condition" is posed.

To conclude, just like whether you are team Yanny or Laurel your answer might be different depends on how you look at it. I am team no race condition in Javascript, what about you?

Once suspended, jmhungdev will not be able to comment or publish posts until their suspension is removed.

Once unsuspended, jmhungdev will be able to comment and publish posts again.

Once unpublished, all posts by jmhungdev will become hidden and only accessible to themselves.

If jmhungdev is not suspended, they can still re-publish their posts from their dashboard.

Once unpublished, this post will become invisible to the public and only accessible to Jimmy Hung.

Thanks for keeping DEV Community 👩‍💻👨‍💻 safe. Here is what you can do to flag jmhungdev:

Unflagging jmhungdev will restore default visibility to their posts.