This is part of a series of articles meant to guide newcomers and professionals alike on important security topics, and sometimes questions from certifications like CEH will be used as the initial instigator to the article. Topics vary from the very basic to the really advanced stuff.

We are in no way associated with EC Council or any other group or company, and the only purpose of this series is to sum up our study group learnings.

A shell is basically the command line interface you are likely to use on a daily basis on a Unix-based operating system. It’s nothing more than an user interface where you can type commands using a well-known syntax.

We approach more advanced subjects that assume you know your way around. If that is not the case or if you want to learn about shell in-depth, I highly recommend Aurelio Jargas’ book on the matter.

So you popped a shell. Nice! First thing you should do is ensure your steps aren’t being monitored.

Keep in mind this section is only about Shell, and doesn’t cover things like auditd and other auditing systems. Don’t risk your life only on that! Still, it’s a useful knowledge for quick stuff.

All I need is a little space

Suppose you don’t want to disable logging for an entire session. You only want that nasty little command of yours to go unnoticed, but it’s ok to leave other commands (or even preferable, in case you want to hide in plain sight).

For this to work you need to understand the functioning of a internal variable called HISTCONTROL .

TL;DR: if HISTCONTROLis set to ignoreboth (the default) or ignorespace , any command starting with a whitespace will not be registered. So instead of “passwd root”, you can use “ passwd root” (notice the space prefix) and the command will not be logged.

$ 100 bucks say you will forget that mysql command, uh?

You can instruct Bash to ignore commands that contain certain strings. This is more useful if you usually type things like passwords on your command line (STOP DOING THAT) and you don’t want those logged. Now, don’t put your password in there, silly. Use the command that usually accompanies it, like mysql or something.

So, to ignore all commands starting with mysql, you can use:

Send the history into oblivion

In Bash, the history is logged at the end of session. This means that you can do cool stuff like saying to Bash to log that session into the void.

So, by using one of the lines below, you can get rid of that pesky history. Just remember to do it before you logout (preferably immediately after you logged in).

You can also use HISTSIZE for that.

Meaning that would also work:

Afraid that your nasty secrets were already logged? Make a dramatic exit. Just remember dramatic exits make noise, meaning it’ll be clear someone erased the history. And of course, this won’t erase logs sent to a logging service.

There will be additional content on erasing tracks on the future, not just on Bash. For now, checkout the Additional Reading section at the end of the article.

Suppose you are on an extremely restricted environment and want to open a connection to the outside. The firewall isn’t restricting outgoing connections, but you don’t have access to anything like netcat, curl or wget.

You may be lucky if you find yourself in this scenario but the shell you are using is bash compiled with --enable-net-redirections , which is the default in many recent distributions.

Basically, this is the syntax:

A file descriptor is an abstract indicator used to access an I/O resource, such as a pipe or a network socket.

It must also be a non-negative number (because 0 is allowed), and in our particular case, must be equal to or greater than 3, because we already have 0 (stdin), 1 (stdout) and 2 (stderr) reserved.

Let’s look into some examples.

GET a remote page

The first line opens a bidirectional (because of the <>) TCP socket to example.com at port 80/TCP.

The second line issues a GET command from the HTTP protocol, effectively fetching the page. The command is then sent to the file descriptor 3 that we opened on the first line.

The third line reads back from the socket, printing the contents of http://example.com. 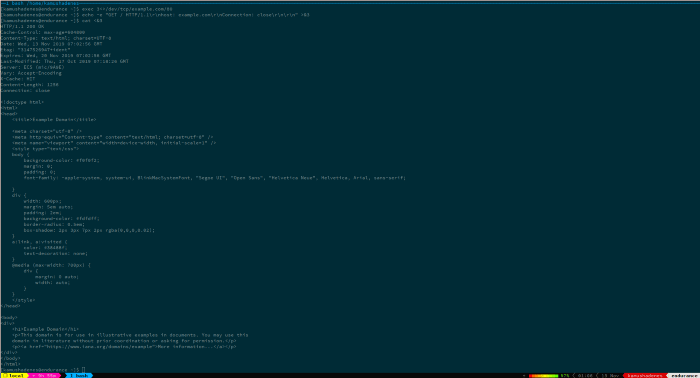 Using this socket, you can get the version of a SSH server running somewhere else. This happens because, upon completing a TCP handshake, the SSH server sends to the client a banner containing it’s version.

The first line was already explained. The second line is the same as the cat command on the previous example, except this time it contains a timeout of 1 second. This is because the connection on this case is never closed, so the cat would never return as it would think there was still data to receive. Keep in mind though that this timeout only applies if the connection is successful, it will not timeout if the connection never finishes, instead the default timeout of 60 seconds will be used.

On the GET example this doesn’t happen because of the Connection HTTP header which was set to close, instructing the remote server to just sent the requested page and hang up the connection.

In case you want a one-liner:

In this case, no file descriptor is created because we are immediately using the socket.

Testing whether a connection is successful

Using the return code, you can determine if a connection was successful (i.e. the port is open)

You can do this on one line also.

In case you don’t have something like nmap nor do you have a proper compiler or interpreter to write your own port scanning code, this can get you off the hook.

This will take sometime (specially because closed ports will take a long time to time out), but will work. Try restricting it to ports that really matter to you.

Remember how you can set netcat to listen on a specific port? ;)

What is the importance of API security for businesses today?

Once suspended, kamushadenes will not be able to comment or publish posts until their suspension is removed.

Once unsuspended, kamushadenes will be able to comment and publish posts again.

Once unpublished, all posts by kamushadenes will become hidden and only accessible to themselves.

If kamushadenes is not suspended, they can still re-publish their posts from their dashboard.

Once unpublished, this post will become invisible to the public and only accessible to Kamus Hadenes.

Thanks for keeping DEV Community safe. Here is what you can do to flag kamushadenes:

Unflagging kamushadenes will restore default visibility to their posts.