Now that I'm a little over a month into my journey with Flatiron School, I was asked to make a Ruby application with data from an API or from a web page. After searching for a project to sink my teeth into, I decided to create a program that helps me with one of my pastime interests -- tracking songs (more often called tracks) played by my favorite DJ's.

In the electronic music world, a lot of listeners are interested to know what track a DJ is playing or has played in the past. In fact, the interest is so strong that there are community-sourced websites where users can identify tracks a DJ has played. A lot of times, a DJ will play a track that has not been released on a record label or will even play tracks that users know nothing about (an unknown track).

As an avid track-identifier myself, I wanted to build a Ruby program that would let me add as many or few playlists as I wanted and then be able to search the tracks for ones that are not released or ones that are missing information.

Since 1001 Tracklists does not have an API, I decided to scrape data using nokogiri and open-uri gems.

My program, DJ Booth is made up of four basic classes, Track, Playlist, Scraper, and CLI. Objects indirectly relate to one another except for Track and Playlist which have a 'belongs-to, has-many relationship' in that Track belongs to a Playlist and stores this information as an object in its @playlist attribute accessor.

The CLI class houses the UI of the program and also decides when new Scraper classes are created and a new Playlist is added to the program. The CLI class also handles a variety of ways to view instances of Playlist and Track using their .all methods.

All classes are contained in their own file in a lib directory and are linked together in one enviornment file using require_relative. The bin directory contains only one file with no extension and a shebang line declaring the language as ruby.

The program then enumerates through each track listing on the website using the #each method and then calling Track.new and assigning its attributes to information on the website.

The CLI class relies on one major instance method called input_loop which is called within itself to go back to the main menu unless the user wishes to exit the program. On the main menu Track.all.count and Playlist.all.count are called to let the user know how many instances of Playlist and Track are loaded in the program. 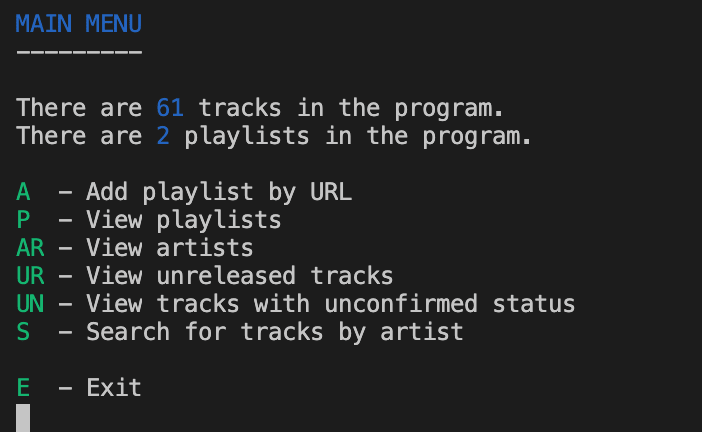 The user can then view the objects in a variety of ways that use enumerator methods to show the data back to the user. Selecting "UR" will show the user Tracks that have a #label of "Unreleased" and puts them out using string interpolation

This method also counts tracks that are missing their name and artist and returns it in a string using the colorize gem.

As I wrapped up this project, it became apparent there are several opportunities to refactor my code:

Learn how to create a Ruby executable

How to Render Plain Text Templates in Ruby on Rails

Once suspended, karsonkalt will not be able to comment or publish posts until their suspension is removed.

Once unsuspended, karsonkalt will be able to comment and publish posts again.

Once unpublished, all posts by karsonkalt will become hidden and only accessible to themselves.

If karsonkalt is not suspended, they can still re-publish their posts from their dashboard.

Once unpublished, this post will become invisible to the public and only accessible to Karson Kalt.

Thanks for keeping DEV Community 👩‍💻👨‍💻 safe. Here is what you can do to flag karsonkalt:

Unflagging karsonkalt will restore default visibility to their posts.