WebServer is a computer that stores webserver software and a website's component files. (for example: HTML, images, scripte etc..) WebServer is a server side software used to satisfy client's request over World Wide Web. Web Server works over protocols like HTTP and processes the incoming request.

Now our container is completely setup and ready to use for further configuration.

The above command will enable the webservices and further the services can be verified using the netstat command given below as systemctl doesn't work.

If we are using the default 80 port we need not to specify the port number as browser itself use the 80 port.

The WebServer will stop when we stop the Docker Container and will not start again if we need to add the services to the .bashrc file to start the services at boot time. We also need to remove the files present on the /var/run/httpd folder as the pid is stored in the specified folder for the current process of httpd running and when we stop the container and start again the processid is not removed.

We are updating the .bashrc file as it is the script that gets executed when a user logs in. The file itself contains a series of configurations for the terminal session.

Creating a Docker Image from the container 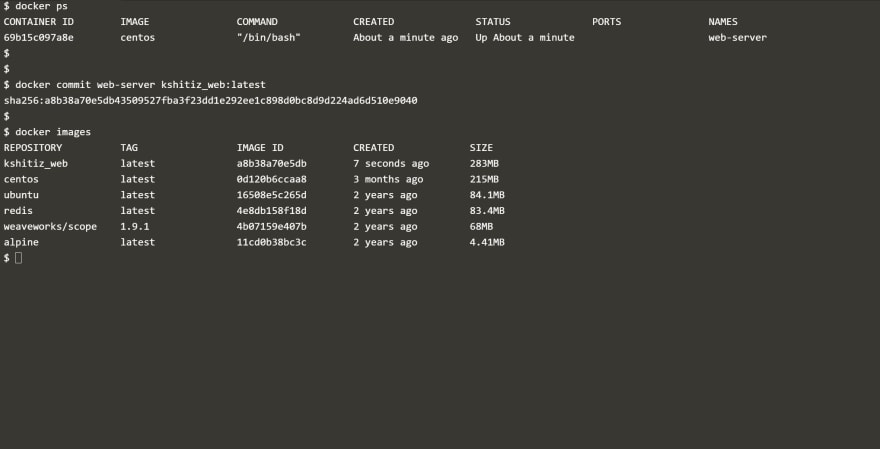 Following command will create a docker image from the given container.

Now the WebServer has been configured on the CentOS container and can be used using the new Docker Image.

How to reduce the size of a Docker image using dive

Once unpublished, this post will become invisible to the public and only accessible to Kshitiz Saini.

Thanks for keeping DEV Community safe. Here is what you can do to flag kshitizsaini113:

Unflagging kshitizsaini113 will restore default visibility to their posts.