Kubernetes is a container-orchestration system which was open-sourced by Google in 2014. In simple terms, it makes it easier for us to manage containers by automating various tasks.
If you are not familiar with containers, checkout: https://medium.com/coding-blocks/docker-made-easy-901b792bec7c

A container-orchestration engine is used to automate deploying, scaling and managing containerized applications on a group of servers. As I mentioned above, Kubernetes makes it easier for us to manage containers and ensure that there is no downtime. To give you an example, suppose one of the containers that you are running went down, it won’t take much effort to restart it manually. But suppose a large number of containers went down, wouldn’t it be easier if the system handles this issue automatically? Kubernetes can do this for us. Some of the features include scheduling, scaling, load balancing, fault tolerance, deployment, automated rollouts, and rollbacks, etc.

Kubernetes Architecture consists of master node which manages other worker nodes. Worker nodes are nothing but virtual machines / physical servers running within a data center. They expose the underlying network and storage resources to the application.
All these nodes join together to form a cluster with providing fault tolerance and replication. These nodes were previously called minions.

It is responsible for managing the whole cluster. It monitors the health check of worker nodes and shows the information about the members of the cluster as well as their configuration.
For example, if a worker node fails, the master node moves the load to another healthy worker node. Kubernetes master is responsible for scheduling, provisioning, controlling and exposing API to the clients.
It coordinates activities inside the cluster and communicates with worker nodes to keep Kubernetes and applications running.

Components of the Master Node

Gatekeeper for the entire cluster. CRUD operations for servers go through the API. API server configures the API objects such as pods, services, replication controllers and deployments. It exposes API for almost every operation.
How to interact with this API?
Using a tool called kubectl aka kubecontrol. It talks to the API server to perform any operations that we issue from cmd. In most cases, the master node does not contain containers. It just manages worker nodes, and also makes sure that the cluster of worker nodes are running healthy and successfully.

It is responsible for physically scheduling Pods across multiple nodes. Depending upon the constraints mentioned in the configuration file, scheduler schedules these Pods accordingly.
For example, if you mention CPU has 1 core, memory is 10 GB, DiskType is SSD, etc. Once this artifact is passed to API server, the scheduler will look for the appropriate nodes that meet these criteria & will schedule the Pods accordingly.

There are 4 controllers behind the control manager.

Distributed key-value lightweight database. Central database to store current cluster state at any point of time. Any component of Kubernetes can query etcd to understand the state of the cluster so this is going to be the single source of truth for all the nodes, components and the masters that are forming Kubernetes cluster.

It is basically any VM or physical server where containers are deployed. Every Node in Kubernetes cluster must run a runtime such as Docker or Rocket. 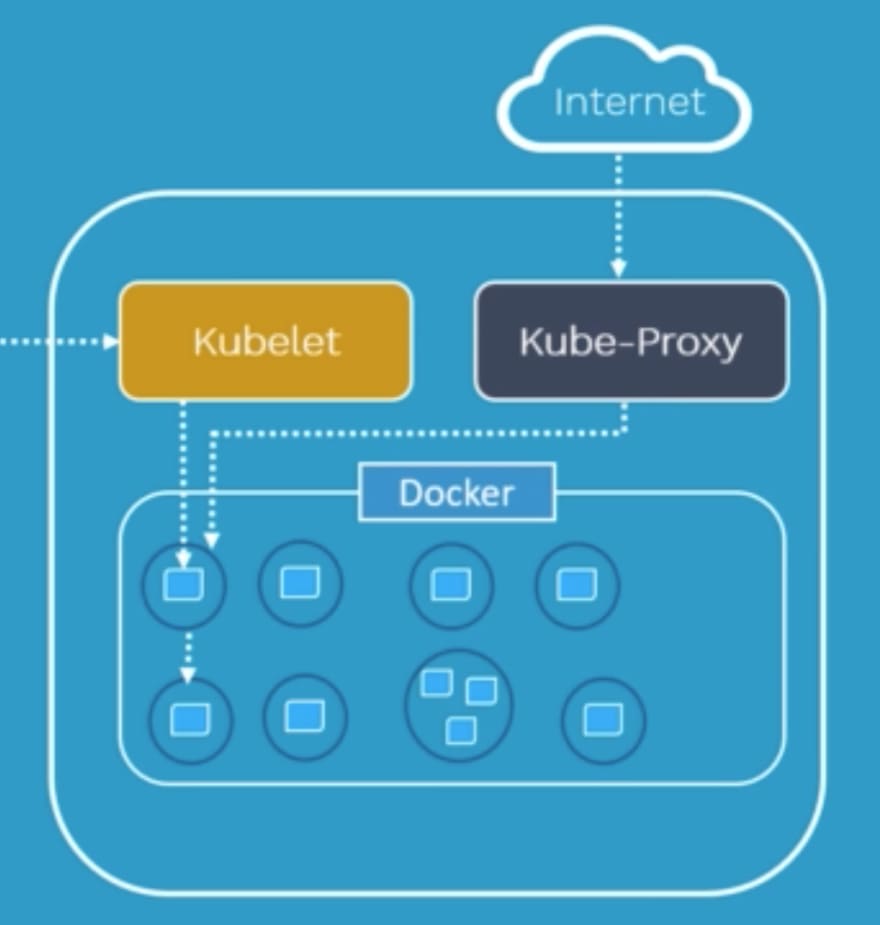 Components of the Worker Node

Primary Node agent that runs on each worker node inside the cluster. The primary objective is that it looks at the pod spec that was submitted to the API server on the Kubernetes master and ensures that containers described in that pod spec are running and healthy. Incase Kubelet notices any issues with the pods running on the worker nodes, it tries to restart the Pod on the same node. If the fault is with the worker node itself, then Kubernetes Master detects a Node failure and it decides to recreate the Pod on another healthy Node. This also depends on if the Pod is controlled by Replica set or Replication Controller (ensures that the specified number of pods are running at any time). If none of them are behind this Pod then Pod dies & cannot be recreated anywhere. So it is advised to use Pods as deployment or replica set.

Responsible for maintaining the entire network configuration. It maintains the distributed network across all the nodes, across all the pods, and all containers. Also exposes services to the outside world. It is the core networking component inside Kubernetes. The kube-proxy will feed its information about what pods are on this node to iptables. iptables is a firewall in Linux and can route traffic. So when a new pod is launched, kube-proxy is going to change the iptable rules to make sure that this pod is routable within the cluster.

It is used in case you want to install it on the system but have limited system resources. Minikube is all in one system, i.e. no multiple architectures of master and worker Node. The same system acts as a master as well as a worker node. It can be used for testing purposes.
https://kubernetes.io/docs/setup/learning-environment/minikube/

It is an actual real-time setup. Using Kubeadm tool we can setup multi-node Kubernetes cluster. It is very popular and you can have multiple VMs on your machine and configure Kubernetes master and node components. If you have limited resources but want to use Kubeadm, then you need cloud-based VMs.
https://kubernetes.io/docs/setup/production-environment/tools/kubeadm/install-kubeadm/

Various cloud services are being provided to run and manage Kubernetes. One can define a number of nodes in cluster, CPU and RAM configurations, etc. and the cloud will manage those resources. Some of the examples include GCE, AWS, Azure, CloudStack, etc.
For more information, check: https://kubernetes.io/docs/concepts/cluster-administration/cloud-providers/

Every node inside a Kubernetes cluster has its unique IP address known as Node IP Address. In Kubernetes, there is an additional IP Address called Pod IP address. So once we deploy a Pod on the worker node, it will get it’s own IP Address.
Containers in pods communicate with the outside world by network namespace. All the containers inside a pod operate within that same network namespace as the pod. Means all the containers in a pod will have the same IP Address as their worker node. There is a unique way to identify each container. It can be done by using ports.
Note: Containers within the same pod, not only just share the same IP Address, but will also share the access to the same volumes, c-group limits, and even same IPC names.

How do Pods communicate with one another? 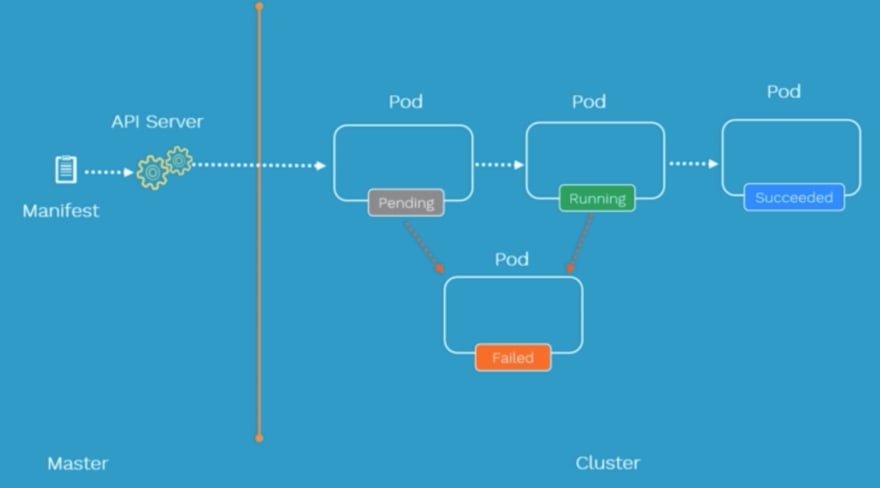 It defines the version of the Kubernetes API you’re using to create this object.

It defines the type of object being created.

Data that helps uniquely identify the object, including a name string, UID, and optional namespace.

The precise format of the object spec is different for every Kubernetes object, and contains nested fields specific to that object.
For more information, check out: https://kubernetes.io/docs/reference/generated/kubernetes-api/v1.15/
The above file will create one instance of nginx container inside your Kubernetes cluster.

In this demo we will use the manifest file nginx-pod.yaml described above.

How to start your open source journey with UNICEF?

60+ Laravel Collection Methods [In Under 15 Minutes] 🚀