By recently launching an integration with LiveChat, SnapCall became the first call solution on the LiveChat Marketplace. The integration enables businesses to call customers directly inside the chat. Customers are provided with the possibility to have a voice conversation with the same agent they were chatting with.

“We thought that the possibility to quickly jump on a call is something that’s missing inside the chat. Integrating the SnapCall solution with LiveChat was the project we’ve been willing to take on. The possibility for agents to launch a call with the same customer they were chatting with seemed like a feature many businesses could benefit from” says Thomas, SnapCall co-founder and CTO.

To build the app, developers have used multiple LiveChat SDKs. For instance, the LiveChat Agent App SDK is employed to send a rich message enabling the agent to call customers inside the chat. To operate the call on the customer side, the SnapCall team have used the LiveChat Moments SDK. 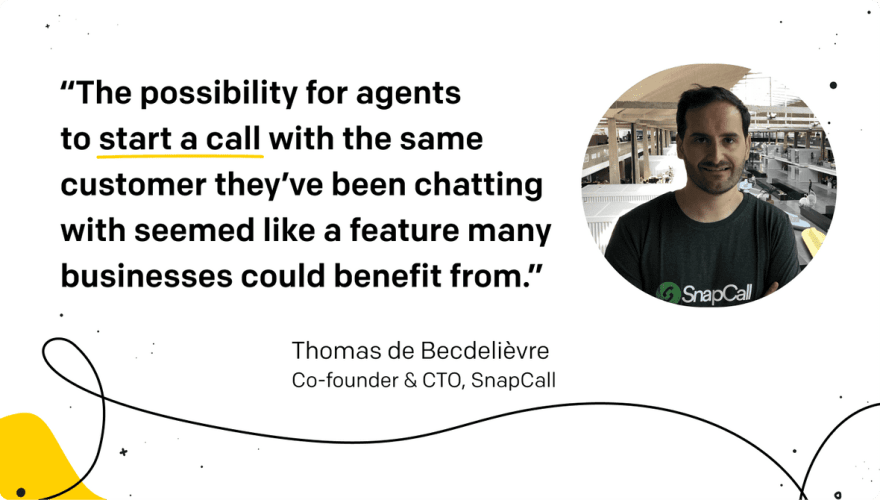 As the SnapCall team was the first to introduce the direct voice channel inside the chat, building the integration involved some challenges. One of them was to find a way to use the full potential of the LiveChat APIs and build a great calling experience for agents.

Julien, a member of the SnapCall Product team, shared his experience of building the app:

“Developing the SnapCall app for LiveChat was a bit challenging because the voice is a really special experience. We’ve experienced a couple of issues directly related to the particularity of the voice channel. For example, to provide the possibility for an agent to launch a call and pick it up for a customer, the SnapCall app needs to get microphone usage permission from the user’s browser. The functionality that allows SnapCall to ask for the microphone authorization wasn’t available in LiveChat before as there was no need for it. However, the LiveChat Product team updated their environment really quickly to let us request the microphone usage.”

The call-in-the-chat feature, which doesn’t require any phone numbers, additional equipment, or training appeared to be something many companies wanted to have within their LiveChat account.

The app turned out to be a great success and has already been tested by many LiveChat users. One of them, Valley Driving School, has been using the calling solution for a while now, as well as continuously sharing their feedback to help improve the app even further. Here’s what Melissa Hannam, Director of Marketing at Valley Driving School said about the SnapCall integration:

“The technology has definitely exceeded our expectations. There have been very minimal connection issues, and any time I reach out to the SnapCall team, they are very open to feedback. The issues get addressed immediately and they try to implement our suggestions quickly, so the customer service is truly great. And it literally took us one click to start using the solution, as all you need to do is click on the Install button on the LiveChat Marketplace and the SnapCall solution becomes automatically available to the whole team.”

To help SnapCall with the distribution, the LiveChat team prepared email and Marketplace campaigns for the integration. As a result, the weekly installation rate has increased over 5 times.

When we asked the SnapCall team to share their overall experience of developing the direct voice channel for the LiveChat user base, this is what they had to say:

"Within a month of work and the help of the LiveChat team, our developers were able to deliver a fully functional beta version. When we look back now, it’s been such a pleasure for our team to work on this integration. The documentation was extremely clear and straightforward and we truly appreciate the support we received from the LiveChat team, who were always available in case we needed some advice or assistance."

The LiveChat Marketplace is still relatively young and there’s plenty of room for new integrations. If you want to build apps that feature on the Marketplace, now is the best time to give it a shot.

Don't know what you could build for us? Explore our App Ideas or follow us on Twitter.

Once suspended, livechat will not be able to comment or publish posts until their suspension is removed.

Once unsuspended, livechat will be able to comment and publish posts again.

Once unpublished, all posts by livechat will become hidden and only accessible to themselves.

If livechat is not suspended, they can still re-publish their posts from their dashboard.

Once unpublished, this post will become invisible to the public and only accessible to Łukasz Wardęga.

Thanks for keeping DEV Community 👩‍💻👨‍💻 safe. Here is what you can do to flag livechat:

Unflagging livechat will restore default visibility to their posts.