DEV Community is a community of 623,065 amazing developers

Not sure if you felt the same way, but when I was about to buy my first hosting package, I was pretty lost.

There were so many options I didn't even know where to start.

As a fellow Redditor, I turned to some other devs and asked them for help.

Surprisingly a lot of people were recommending the same web hoster over and over again. So today, I share Reddit's opinion about the best web hosting provider in 2021.

I think it's safe to say that siteground is Reddit's favorite hosting provider.

And there is proof for that. 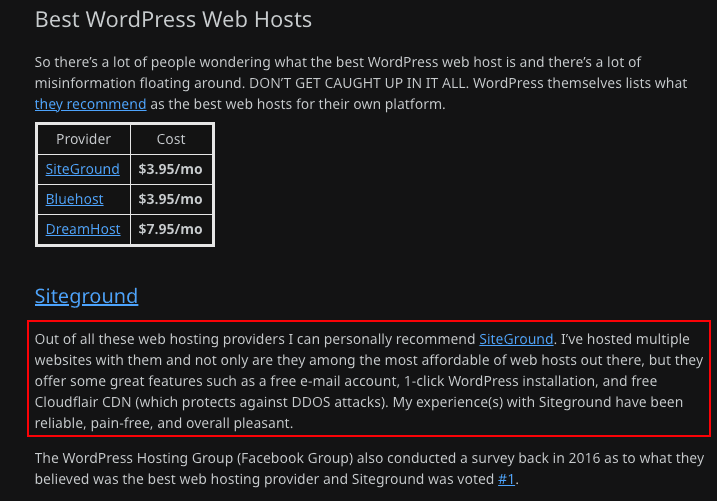 And actually, a lot of times when looking up a hosting company, siteground is the alternative that is being recommended.

The first picture I've shown you was from this post.

Or it's going to be downvoted.

This however was a pretty good example of Reddit's opinion about the current state of hosting companies. They all agree: Sitegound is #1.

What does Siteground offer?

They have several hosting packages, all including free WordPress management, E-Mail, caching, and more.

For those of you who don't know, EIG stands for Endurance International Group. The general opinion among Redditors is that this group doesn't offer the best service.

Also, since the EIG group contains dozens of hosting companies, you may switch from one provider to another without realizing that you actually don't.

But still, Bluehost is an EIG company and it's being recommended.

After searching for more information about Bluehost, you'll be able to find good reviews like this:

BTW This was the first answer to this post.

So I think if there is something particular that you love about Bluehost, give it a try. You can select monthly payments and this way you'll be able to cancel if you don't like it.

As one Redditor already said here

WPEngine is the choice in terms of high-end hosting.

What exactly is WPEngine?

Now speed is the game-changing factor right here. If you want to rank a page on google, you might already know that page-speed is a significant ranking factor.

In terms of WordPress, it's even more important since WordPress works with databases and you may use tons of plugins.

That can slow down your page.

So if you have a dollar more to spend or if you're looking for high-end hosting, make sure to check out WPEngine.

It's a bit pricey, but according to Reddit, it's worth it.

What are the prices?

Like I've said if you're looking for something premium with a great service, WPEngine might be the right hoster for you.

I couldn't find anything super bad or good about A2 hosting. I think if you like their plan it's a safe address.

This user here was asking what to chose, Siteground or A2 hosting.

I think the general opinion was again: Siteground.

But I also found this kind of comment about A2. 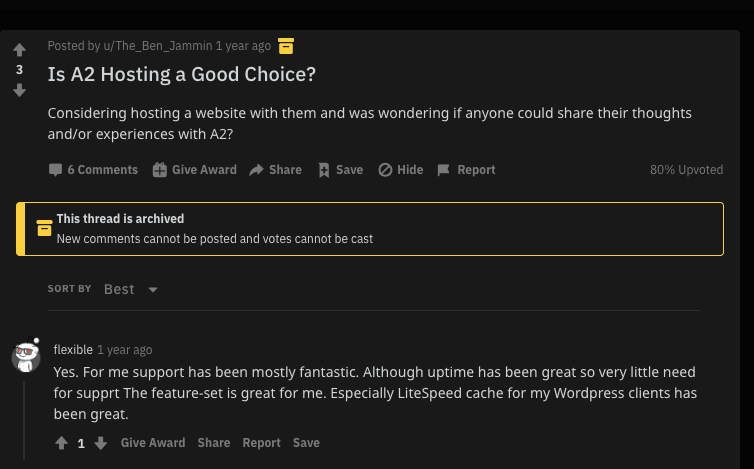 So again, if you like their services, I think it's safe to say go for it. Just make sure to select monthly payment again.

So Hostgator is one of these perfect EIG examples. These are the top comments when checking out Reddit and Hostgator.

They may have optimized their services but that's something I couldn't find anything about on Reddit.

Stablehost is a good alternative if you want something cheap and if you're just starting out.

The prices are EXTREMELY fair and at that price range, the service can't be beaten. It's not that popular from what I see, that's why I consider it a hidden gem.

Digitalocean is another hosting company you might already heard something from, especially in 2021.

The reason is simple.

Most of the hosting companies we've talked about before are managed hosting packages. This means that they take care of the software, security updates, or installing WordPress.

Digitalocean however isn't. It's completely unmanaged.

So you have to take care of all the "hosting stuff". You'll need to install updates and take care of your server.

It's much cheaper than managed shared-hosting.

So for those of you who are more experienced, I recommend Digitalocea. It generally has a really good reputation on Reddit.

That's all. If I forgot something, please let me know. Btw, if you're looking for more information about this topic, feel free to check out my hosting recommendations according to reddit.

7 JavaScript Data Structures you must know

How to ban users from all chats with TalkJS