Recently Atlasssian announced that it will encourage its employees to join the Global Climate Strike on September 20th. 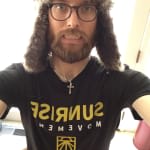 Atlassian is supporting the Sep 20 climate strike. Will you?

Now, groups of Amazon workers and Microsoft workers have each announced they are organizing walkouts to join the strike. Unfortunately, neither Amazon nor Microsoft have taken the same anti-ecocide stance as companies that Atlassian has put forth.

In addition to showing solidarity with the global demands of the strike, about 1000 Amazon workers linked their walkout to specific demands for Amazon to meet emissions goals that align with accepted science and divest itself of business with fossil fuel producers and major polluters. Microsoft tech workers are organizing a similar effort in order to push Microsoft in the same direction.

These actions seem to form a convergence between global efforts to push powerful entities across the world to end the climate crisis and organizing within major tech companies to embrace ethical responsibility for the impact of their products.

I hope all tech workers here on DEV will join me in both expressing gratitude to these Amazon and Microsoft workers for risks they are taking in confronting their employers, and providing direct solidarity by marching on the 20th yourselves.

We deserve a livable future, and tech must play a role in winning it!

Join the movement to end the climate crisis and create millions of good jobs at https://sunrisemovement.org or any one of Sunrise Movement's partner organizations all over the world.

Any opinions expressed in this post or other posts in this series are mine alone and should not be construed as the official stance of any organization to which I belong.

Luke Westby
Elm core contributor. Creator and former maintainer of ellie-app.com. elm-conf organizing team alumnus.
Google workers will join the Sep 20 Climate Strike Atlassian is supporting the Sep 20 climate strike. Will you? How much data do I need to have Big Data?