If you ever need to wrap a React app in Electron, you'll surely find there's no shortage of tutorials that explain how to set up your project in your local development environment. But what happens when you're ready to package up that app in distributable formats so users can install it on their systems?

I recently found myself needing to do this on a project and found that I had to do a bit of experimentation before setting on how to best approach generating, developing, and packaging an Electron app with code scaffolded from Create React App under the hood.

In this post, I'll share with you what steps I followed to make this happen and how I reconciled the code generated by the CRA and Electron Forge CLIs to run no-fuss builds with a single command.

TL;DR: You can find the complete code from this demo here.

Set Up the React App with Electron

The approach we'll take to set up our app will involve a few steps:

We'll take care of the first two steps in this section and then configure our project with Electron Forge in the next section. Let's begin by creating the new React app:

I'll use npm in this tutorial so I've passed the --use-npm flag above, but you can use Yarn if you prefer too. Now we'll change into our new project directory:

Our next step will be to install Electron in our project as a development dependency:

And we'll also install a package that will make it easy for us to detect if we're running in a development or production environment in our Electron app:

Moving onto the second step, we're going to add a file to the public directory called electron.js to contain all of our Electron-related code.

Note that you will often see this file called main.js in tutorials, but I think that calling it electron.js here disambiguates what it's purpose is!

Inside of electron.js, we'll add the following code:

The code above has been adapted from a starter example in the Electron docs, but with a few notable changes:

With this file in place, we'll need to declare it as the main entry point for the Electron app in our package.json file:

Now we need to think about how we're going to start our app up. In the development environment, we'll want to start the React app up first and only launch Electron once http://localhost:3000 is available. Ideally, we'd also prevent the default CRA behavior that opens a browser tab with our app running in it. (We don't have to worry about any this in production because Electron will just load the static index.html and bundled JS files.)

To launch our development server and Electron together, we'll need to install two more packages:

Concurrently will allow us to run multiple commands in one npm script and wait-on will require Electron to wait for port 3000 to be available before the app launches. We'll use these packages to add dev and electron scripts to our package.json file:

Passing the BROWSER=none option before npm start will prevent a regular browser tab from launching once our React app starts up. If we run npm run dev now, then we'll be able to see our React app running with Electron instead of in a browser window: 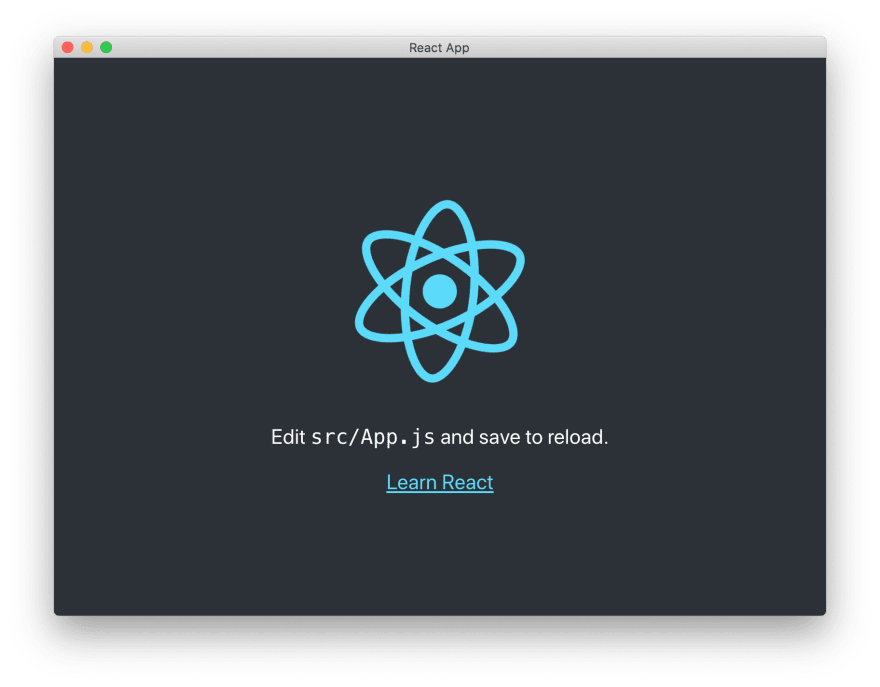 If all we wanted to do was wrap a React app in Electron and experiment with it in our development environment, then we could call it a day here. But odds are that you'll likely want other people be to able to use your app like any other desktop app on their computers too!

There are different options available for packaging up Electron apps for different platforms, but the best all-in-one solution I've tried is Electron Forge. We can import our existing Electron app into the Electron Forge workflow by running this command in our project now:

When the importer script runs (and it may take a couple of minutes...), Electron Forge will install some additional dependencies and make some changes to our package.json file. If we take a look at the scripts in the package.json file, we'll see that it has modified our existing start script to this:

We'll need to change this script back to the way it was before:

We'll also make a small adjustment to the new package and make scripts to also build our React app beforehand:

Lastly, we'll modify our own electron script to use electron-forge to start up the Electron app instead:

Over in public/electron.js now, we can use the electron-squirrel-startup package installed Electron Forge to handle creating and removing shortcuts on Windows (should we wish to package our app for that platform too):

With our new code in place, we should be able to run npm run dev again and see the Electron app start just as it did before.

Next, we'll add some new code at the top of public/electron.js to conditionally require this package when our development environment is detected:

Lastly, we'll need to call the installExtension function when the app is ready, so we must update the existing app.whenReady().then(createWindow); lines as follows:

If we relaunch the app now, we should be able to see that the Components and Profiler tabs are available in the dev tools window:

We're finally ready to generate a platform-specific distributable so other people can install our app. In the following example, we'll build the Mac version of the app.

First, we'll need to set a homepage property in the package.json file to help CRA correctly infer the root path to use in the generated HTML file:

As a nice touch, we can also create a custom app icon to appear in the user's dock using the electron-icon-maker package. To do this, we'll need to supply it an absolute path to a PNG file that's at least 1024px by 1024px. We'll run this script from the root directory of our project to generate the icon files:

Next, we can add the correct icon file and customize the name our app (as it will appear in the top menu or when hovering over the dock icon) under the config key in our package.json file:

Note that if you wish to change the name that appears at the top of the window, you'll need to update that in the title element in the public/index.html file before building the app:

Now we can run a single command to package up our app for distribution:

The packaged app can now be found in a new out directory in the root of our project. You can now drag this app in your Applications folder and run it like any other app on your system.

Finally, if you plan on version controlling this project with Git, then be sure to add the out directory to the .gitignore file before making your next commit:

In this tutorial, we used Create React App to scaffold a React app, which we then wrapped in Electron. We imported the app into an Electron Forge workflow using the provided CLI tool, made some adjustments for it to play nice with a CRA app, and then generated a distribution of the app for Mac.

You can find the complete code for this tutorial here.

I hope you've found the code in this tutorial helpful! Thanks for coding along and please leave any questions or comments below.

Once suspended, mandiwise will not be able to comment or publish posts until their suspension is removed.

Once unsuspended, mandiwise will be able to comment and publish posts again.

Once unpublished, all posts by mandiwise will become hidden and only accessible to themselves.

If mandiwise is not suspended, they can still re-publish their posts from their dashboard.

Once unpublished, this post will become invisible to the public and only accessible to Mandi Wise.

Thanks for keeping DEV Community 👩‍💻👨‍💻 safe. Here is what you can do to flag mandiwise:

Unflagging mandiwise will restore default visibility to their posts.