Consistent hashing is done to implement scalability into the storage system by dividing up the data among multiple storage servers.

We use consistent hashing when we have lots of data among lots of servers(database server), and the number of available servers changes continuously(either a new server added or a server is removed).

Why not Simple Hashing

A simple hash function will take the data/key and produce a number in a specified range.

Now, our hash function will  look something like this

this will give a random number in the range [0 - (n-1)] and n is the number of database servers.

This will divide the data perfectly among the number of servers.

This is how the keys will be distributed among 3 servers: 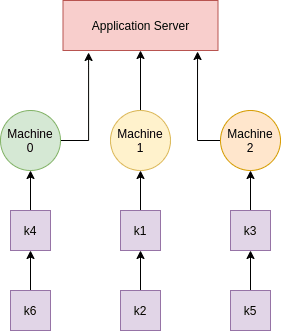 The problem arises when a server is added.

We need to add the keys to this new server too, and for this, we have to recompute all hash again(with numbers servers=4) to find the server number for each key and hence the key distribution will change. 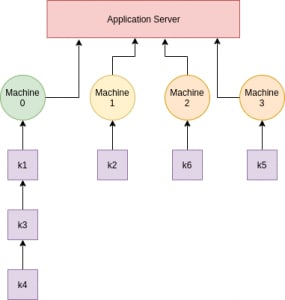 The same kind of problem arises when a server is removed, we have to recompute hash(with a new number of servers).

Another problem that we will encounter is skewing i.e, too many keys will hash to one server and too little to others or keys are non-uniformly distributed. 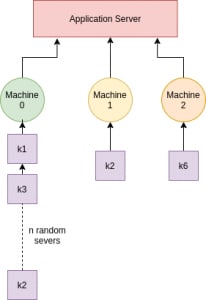 The major problems we face with simple/regular hashing:

Consistent hashing helps us to distribute data across a set of nodes/servers in such a way that reorganization is minimum. The magic of consistent hashing lies in the way we are assigning the keys to the servers.

In, consistent hashing, the hash function works independently of the number of nodes/servers. Here we assume a virtual ring is formed and keys, servers are distributed around the ring.

The hash function is

Here 2^32 is the number of positions (or ring length) and is a completely random number, you can choose any large number of your choice.

Adding a new server to the ring

Let's say we are going to add a new server and says its hash value lies between server 0 and server 1. 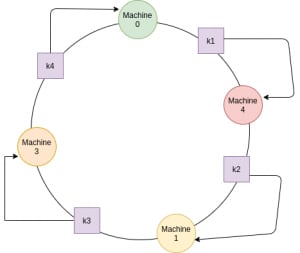 only key1 and key2 are hashed instead of hashing all the keys.

As a result of adding a new server, we don't have to rehash all the key values, instead only those which lie in between server 0 and server 1. On average in real-time, if we have n servers and k keys, we have to rehash only k/n keys. This is a significant improvement over the simple hashing.

Removing a server from the ring 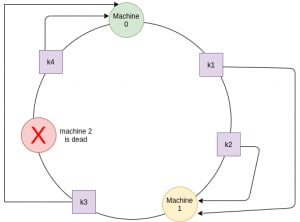 Server 2 is dead and all of its corresponding keys only are rehashed. Consistent Hashing - server is removed

There can be one more problem that can appear. The non-uniform hashing problem i.e, the majority of keys get hashed to a single machine or near to the single server. This is not ideal as one server has more number of keys as compared to all other servers. 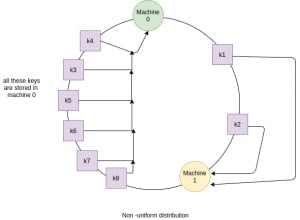 To overcome this problem we introduce more replicas of each server and each replica of a server gets hashed to a different value, which means more machines are placed on the ring at random positions.   As the number of these replicas will increase, the distribution will become more and more uniform. 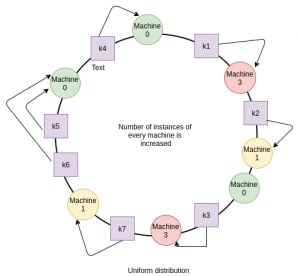 Hence, this is how consistent hashing helps us to scale horizontally.