Schools around the globe are being asked to include technology literacy in their curriculum. This means your kids will be learning how to access technology, manage it, and communicate with it. They'll also be building their own creations with it!

These are exciting times and it will create amazing opportunities for them.

On the other side though, the world of computers and digital technologies can feel daunting and overwhelming, both for teachers and students. But we can't just leave everything up to schools. Computers are increasingly becoming a bigger part of our daily lives.

We, as parents, need to step in too and start talking with our kids about technology. Computer science education should start at home.

Three years ago, when I had my baby, I was working as a full-time teacher at Codaisseur, an international coding academy in Amsterdam. We were running a 12-week development bootcamp and helping hundreds of students to get a career in tech.

From my days as a teacher, I learned that stories are important. And, during my classes, we talked about code as much as we coded.

I'd often say, "Close your laptops. Let's talk!" Students were able to gain a greater understanding, and they felt more confident in their technical skills when they heard my stories about the Model-View-Controller framework and RESTful APIs.

Stories make concepts accessible and tangible. And, inside the classroom, they form the groundwork to build things from.

Parents also need stories - stories about computers that are easy to tell at home, that are very hands-on and exciting so kids start asking lots of questions!

Building Your Arsenal of Stories

The ABC of Computers is a free series within the Zerus & Ona collection. Every two weeks, there's a new chapter that features a new word from the world of computers. Each of these chapters includes: 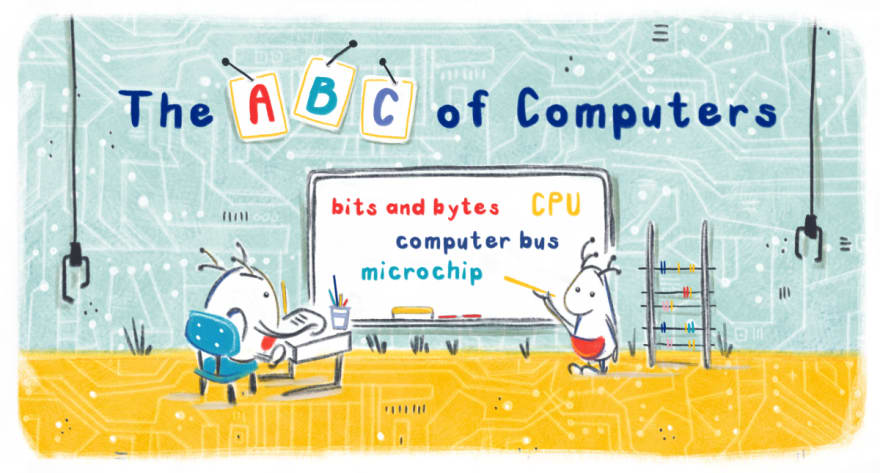 Let's look at one example:

One of the latest chapters explores the CPU.

That's the «brain» of the computer and sends instructions to its other parts. It tends to get warmer and warmer, and that's when your computer will start making buzzing noises...

One of the most famous CPUs was used in the first moon flights under the Apollo program during the sixties. Each flight had two of them!

Try telling that story to your kids, and wait for their questions. This is just one way you can start teaching computer science at home.

Subscribe here to the ABC of Computers Newsletter to receive a free PDF to get you started and build your own arsenal of stories to tell at home!

Read here the other chapters in the ABC of Computers series.

Are you a teacher? How could parents better support your school in their computing education curriculum? Which topics should they bring up with their kids?

Are you a mom or a dad? Are you already talking about computers at home? What are your kids asking and which things would they like to learn more about?