The binary system is the language that computers use. It's a series of 1s and 0s. Each digit or number in this system is called a bit, and when you have eight bits, we refer to it as one byte.

Thanks to this system your computer can communicate with the outside world and save information: letters, numbers, images... Basically, everything you see on your screen (including this article) is made up of different combinations of 1s and 0s.

Now that we know a little more about binary, we'd like to tell you a story about bits, bytes, and rockets! 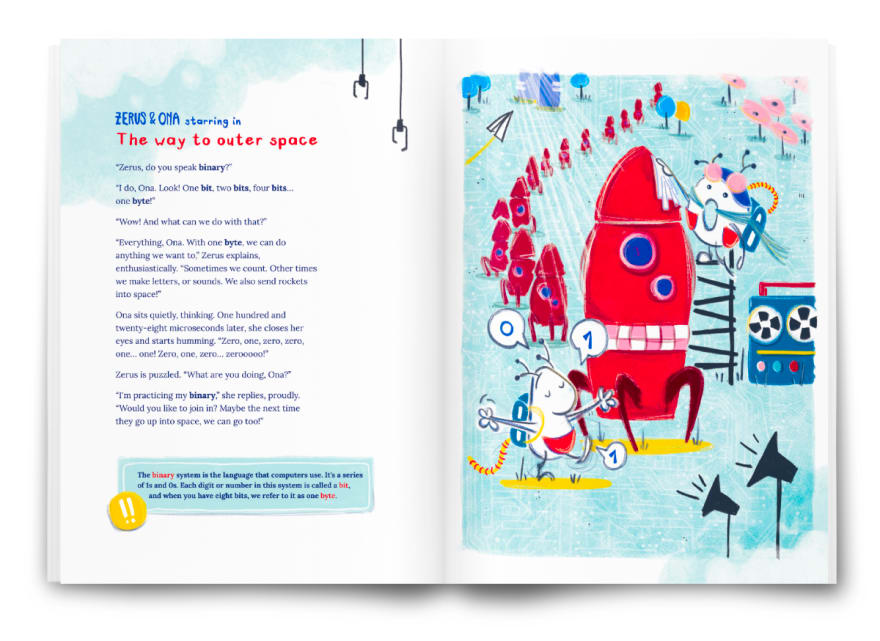 You can download this story at home, and go through it while you cuddle up and learn about computers together.

Remember! Understanding computers is a SUPERPOWER. So, keep on learning! See you in the next episode!

Lots of Megas from The Binary World, 👋
Zerus & Ona

This episode is part of The ABC of Computers with Zerus & Ona, a collection of short stories for parents who want their children to learn about computers from an early age. Check out the series »

Debugging Multer and other middle-wares

Steering your submarine with Elixir, Leex and Yecc (AoC'21, day 2)

👩🏻‍💻✏️ Miriam Tocino
#Author - I help your children learn about computers and start gaining SUPERPOWERS with the picture book series Zerus & Ona 📚 #steAmeducation
What is input/output? What is an algorithm?
#kids #steameducation #beginners #parenting
What is a bug?
#beginners #codenewbie #parenting #kids