Last week, the Apache Flink community released Stateful Functions 2.0: a new way of developing distributed event-driven applications with consistent state. This release added some heat to the stateful serverless movement (I know: "not another buzzword") and, as with any big release, there's always a lot to take in and resources scattered all over the place.

This article sums up the very gist of Stateful Functions and includes a practical example that can softly introduce you to the inner works of the API.

The Gist of It

Stateful Functions allows you to combine a powerful approach to state and composition with the elasticity, rapid scaling and rolling upgrade capabilities of modern FaaS platforms like AWS Lambda and resource orchestration frameworks like Kubernetes. In particular, it overcomes two major limitations looming over many FaaS setups today: consistent state and efficient messaging between functions.

The building blocks of Stateful Functions are functions with persisted state that can interact dynamically with strong consistency guarantees (no need for a database!).

The runtime is built on Apache Flink with the following principles in mind:

Messaging, state access/updates and function invocations are managed tightly together. This ensures a high-level of consistency out-of-the-box. In the background, Apache Flink takes care of all the heavy-lifting involved in managing state, routing messages and scheduling invocations for you.

Functions can be executed remotely, with message and state access provided as part of the invocation request. This way, functions can be managed like stateless processes and support rapid scaling, rolling upgrades and other common operational patterns.

Function invocations use a simple HTTP/gRPC-based protocol so that you can easily implement functions in multiple languages. For now, Stateful Functions ships with a slim Python SDK for remote execution, but support for other languages like Go, Javascript or Rust is planned (a good excuse to get involved in the project!). 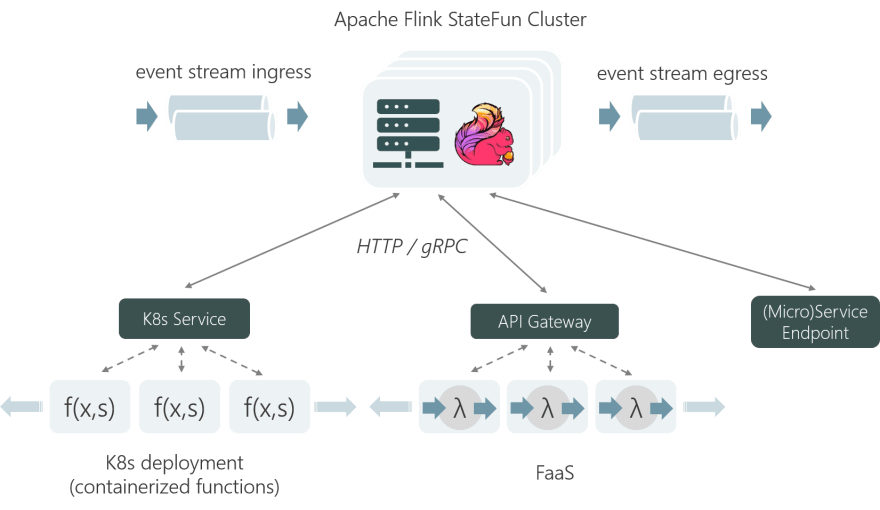 All these characteristics make it possible to execute functions on a Kubernetes deployment, a FaaS platform or behind a (micro)service, while providing consistent state and lightweight messaging between functions. That's some weight off your shoulders, eh?

For a deeper dive into the motivation behind Stateful Functions, have a look at the announcement blogpost by @StephanEwen. If you're just looking for a quick overview, watch this whiteboard session.

To some extent, yes. There's a fine line between stream processing and event-driven applications — and a great deal of overlap. Applications that fell into this overlap could be built with Flink before. What's remarkably different with Stateful Functions is that you're not constrained to a DAG (Direct Acyclic Graph) topology and its rigid communication pattern, as in classical stream processing with Flink. Some applications need a more flexible way to express the interaction between its operators, as well as to scale state (i.e. your application data) and user code independently: this is what Stateful Functions allows you to do. With the added benefit of tightly integrating messaging and state to give you the effect of exactly-once state updates and guaranteed reliable messaging. The operational characteristics provided by the physical compute/state separation are also often critical for many general-purpose application scenarios, but less so for many streaming processing use cases.

How much do I need to know about Flink to use this? 😶

Certain characteristics of Stateful Functions are only possible because of the way Flink was designed in the first place. And because it's a Flink API built in the Flink community, it'll be more natural for you to make certain associations if you know Flink. But this is not a requisite to get started and experiment with Stateful Functions: you won't need to write "Flink code" at any point and you can see Flink as "just the function interpreter". 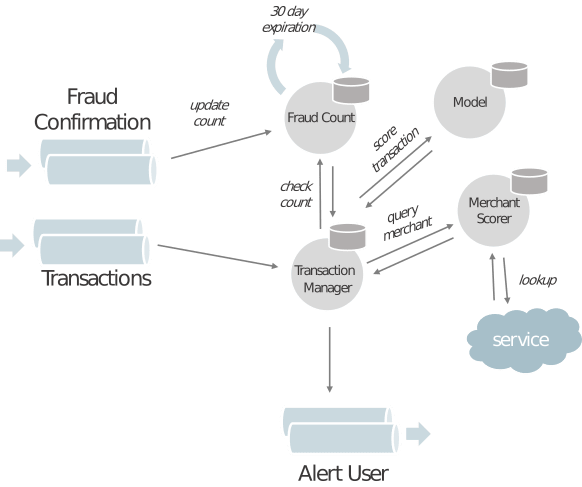 Imagine an application that receives financial information and emits alerts for every transaction that exceeds a given threshold fraud score. To build this example with Stateful Functions, you can define four different functions, each tracking its own state:

The full code for this example (developed by "The Professor" @sjwiesman) is available here.

The entry points to the application are two ingresses (e.g. Kafka Topics): FraudConfirmation and Transactions . As FraudConfirmation events flow in, the FraudCount function increments its internal counter and sets a 30-day expiration timer on this persisted state. After 30 days, the FraudCount function will receive a delayed message (from itself) and clear its state.

You can implement this behaviour by tailoring the function reaction to different types of messages:

Here, multiple instances of FraudCount will exist — for example, one per customer account — and each function instance will be associated with a unique address (function type + ID) that other functions can use to message it (no need for service discovery!).

On receiving events from the Transactions ingress, the TransactionManager function messages FraudCount to get the current count of fraud cases reported for the customer account; it also messages the MerchantScorer for the trustworthiness score of the transaction merchant.

TransactionManager can then create a feature vector with the count of fraud cases reported and the merchant score for the customer account that is sent to the Model function for scoring.

Depending on the score sent back to TransactionManager, it may emit an alert event to the AlertUser egress if a given threshold is exceeded.

It's important to mention that, in this example, functions are not being remotely executed, but embedded in the Flink runtime. This is the most performant option for Stateful Functions deployments, though at the cost of all the operational benefits that physical compute/state separation brings and being limited to Java (slash JVM languages).

I hope this article helped you understand the bigger picture of Stateful Functions and how to translate its functionality into a real-world example. To get a better hang of it, you can start exploring the code walkthroughs available in the documentation (in Java or Python) and check the Stateful Functions webpage. If you hit a snag, reach out to the Flink user mailing list or post your questions on Stack Overflow using the apache-flink/flink-statefun tags.

Stateful Functions is a work in progress that is picking up speed with a very small team behind it. If you're interested in contributing, you can learn more about ways to do it in the Apache Flink website.