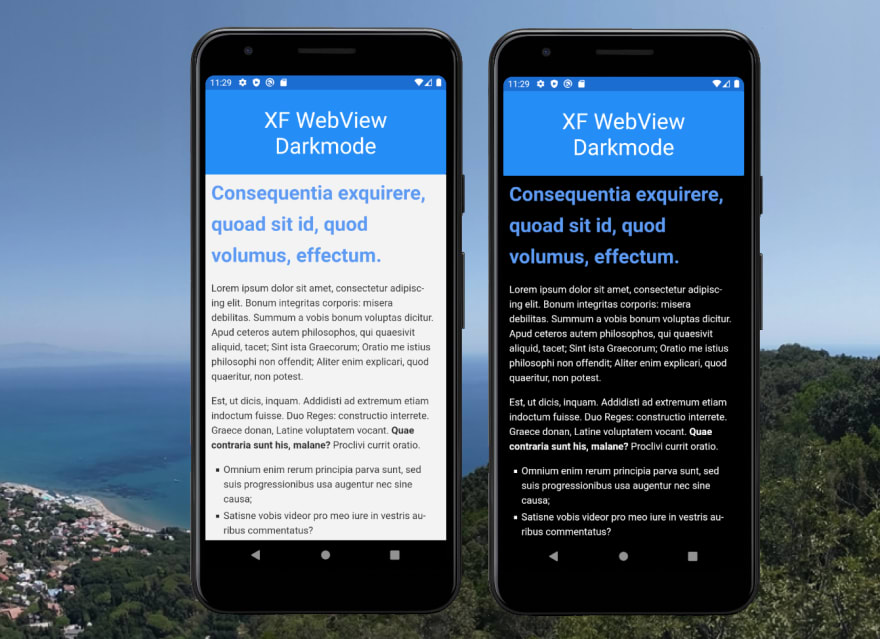 Recently I updated my blog reader app to support the dark mode newer iOS and Android version support. While everything went smooth on iOS and the update is already live in the App Store, I had some more work to do on Android. One of the bigger problems: the WebView I use to view posts does not automatically switch to dark mode with Xamarin.Forms.

On part of the problem is that the WebView does not support the CSS query “prefers-color-scheme“. This works as intended on iOS however and is a problem specific to Android. You can refer to this issue on the Xamarin.Forms repository on Github.

I am not sure if this problem will ever get solved by the Xamarin.Forms team. I tried to play around with some Javascript solutions that are floating around the web to keep just one CSS file. In the end however, I went with a Xamarin.Forms only approach following the KISS principle.

Xamarin.Forms has a working theme detection mechanism. Based on the return value of the Application.Current.RequestedTheme property, I am loading either the dark mode CSS file or the light mode CSS file (which is default in my case).

Shipping the CSS files is easy, we just need to add them to the Assets folder and set the Build action to AndroidAsset. This results in the following structure within the Android project: 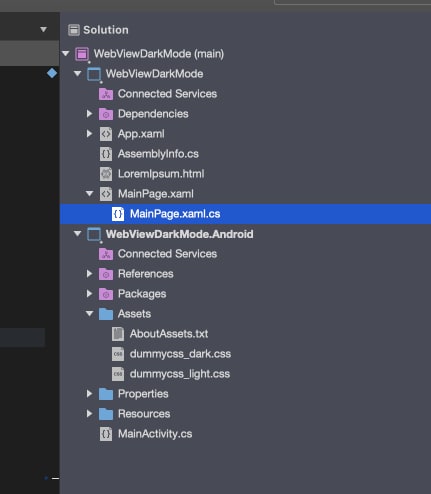 All files that are shipped that way are accessible via the android_asset file uri:

Now that everything is set up in the Android project, let’s head over to the Xamarin.Forms project. In the sample for this post, I am loading a local html file, while I generate the html dynamically in my blog reader app. The idea works the same way in both cases:

As you can see, I just override the light and dark part of the CSS file name I load into the HTML. That’s all the “magic” that needs to happen here. Just one little thing left to add – what if the user changes the theme while the app is running? Xamarin.Forms has the solution built in as well – just handle the RequestedThemeChanged event and override the file name again, followed by setting the HtmlWebViewSource again:

As most of us are already used to, we sometimes need to find some workarounds when dealing with Xamarin.Forms. While this problem could have been solved with a bunch of Javascript and a custom CSS in a WebViewRenderer as well (I tried that, but didn’t like the complexity), you can achieve reliable results with the workaround above just in Xamarin.Forms.

You can find a working sample here on Github. As always, I hope this post will be helpful for some of you.

The post Workaround to force Xamarin.Forms WebView to use a dark mode CSS for local content on Android appeared first on MSicc's Blog.

Getting started with React Native #3 - Setup

Getting started with React Native #2 - What we will build

Why you should be an android developer in 2022