Do you use PhpStorm and have you ever wondered what all those fancy debugging features were? Or could you just not get Xdebug running in Docker or your Vagrant machine? Wonder no more!

In this guide I will guide you through

You can follow along with the xdebug-example github repository I have used throughout this guide.

If you're on Windows or Mac or do not use PECL, you can follow the installation guide that can be found on the official website here.

After you've successfully installed Xdebug, you're ready to configure it. Preferably created a file named xdebug.ini in /etc/php.d/ or /etc/php/conf.d or something else specific to your distribution or add the following to your php.ini:

With zend_extension we load the PHP extension we installed. If you've installed PHP extensions before, you may be wondering why you have enabled other extensions with just extension=x.so. This is because certain Xdebug features, such as step debugging, require zend. The path might be different for you depending on how you installed it.

With xdebug.remote_enable we enable the debugging features of Xdebug to be debugged from a remote location.

If you're following this guide whilst your application runs in docker or vagrant, you'll need to include the xdebug.remote_host configuration. With xdebug.remote_host you tell Xdebug to connect to a certain host when debugging. By default this is localhost but for docker you need the default gateway which is aliased to host.docker.internal or for vagrant 10.0.2.2.

Once you're done configuring, restart apache, nginx, php-fpm or whatever you use and lets start debugging!

Using it in PhpStorm

Open the settings window and browse to Languages & Frameworks > PHP > Servers. Add a new server pointing to the publicly accessible host and port. If you're following along with the mtricht/xdebug-example repository from github, for vagrant this would be host 127.0.0.1 and port 8001. Check the Use path mappings checkbox and map the paths. For my repository and vagrant this would be:

Once set, you're ready to debug! First start listening for debugging connections on the top right:

Next you can either set a breakpoint (by clicking on the left side of a line) or break at the first line: 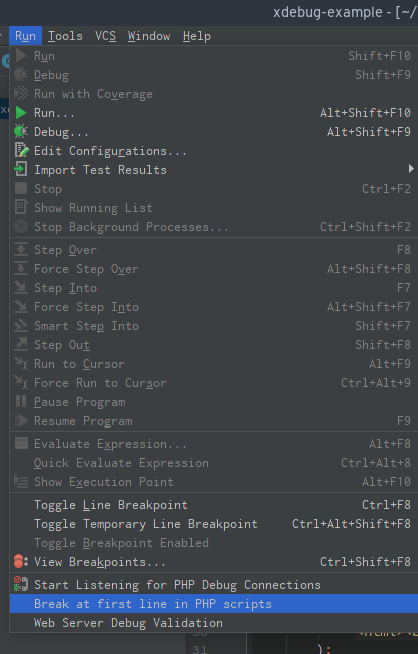 Once you've chosen one, it's time to finally start debugging! Run the code where you set a breakpoint, through either a HTTP request or running a console command, and you'll see a window pop up on the bottom: 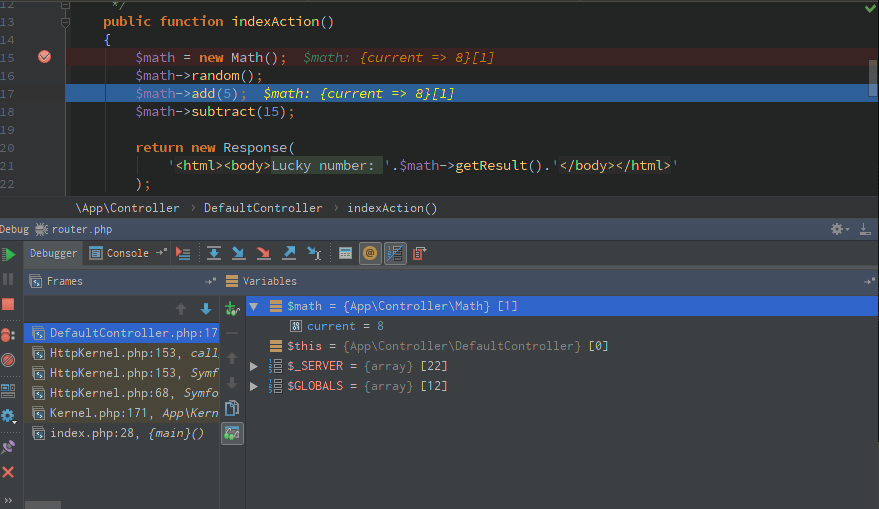 Congratulations, you're now debugging with Xdebug in Phpstorm! You should try to familiarize yourself with all the buttons Phpstorm has to offer. The most important ones are the arrow buttons on the top. Good luck!

Aero / AeroCMS - A Simple and Easy to use CMS Designed to create fast and powerful web apps!

Piko router, a lightweight and blazing fast router for PHP