When you are going to build an app using the iOS platform, which technology should you use so that you can build the App easily and flexibly. Should I choose between a native approach for building the app, or should I go with the cross-platform approach using react native? The question is what kind of features and preferences you need and what capabilities your app should have to leverage the features provided by the next generation platforms. Time says it is always good to go with the native approach as your App will be able to leverage features and functions that are native to the app platform in this case the iOS using swift Technology. Still, there are a varying number of cases where React native could be a better choice. In this article we will explain which technology is better for you to develop iOS apps. 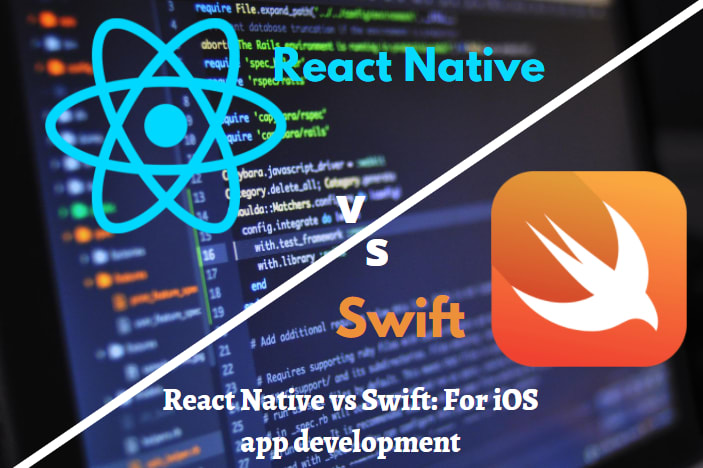 What is Swift?
Apple created the swift language and Technology in the year 2014. swift is best known to work with apple cocoa and cocoa touch frameworks. Not only this but swift is able to support the existing objective C code developed for numerous Apple Gadgets and devices.

Swift is designed from the ground up to be perfect for projects requiring complex infrastructure. I need to use native iOS features as well as in APP payment options. Swift is also able to provide data modelling for apps, different kinds of transaction processing as well as third party Technology integration.

Open source coding: Swift is designed to be an open-source language, which is distributed to developers and designers using the partial licence.
Better handling capabilities for errors: Swift provides developers and designers with a strong typing interface as well as a robust error handling mechanism that prevents code crashes and enables Swift Developers to debug apps pretty quickly and easily.
Easy Scaling: software designed from the ground up to the Future proof and provides numerous features and functions that enable developers to do so. Swift apps are easier to scale and manage depending on the requirements needed by the user.
Less coding: Swift being a concise language, mean stack developers and designers need to use less code to perform the same functions in any other languages for that matter in comparison with react native. The same task can be achieved in less code.
Fast coding and high performance: Swift has been built with one thing in mind and that is performance. The language has an easy and simple to use syntax which enables developers to quickly code applications as per the needs and requirements of the user.

Cons of Swift
Apple devices only: As Swift is a proprietary language and a native language developed for the actual Apple ecosystem, you as a developer are tied towards developing for Apple devices and gadgets. Thus, if you need to build apps for both Android as well as iOS devices then you need to look elsewhere.

React native is a feature-rich framework that is designed, developed and supported by Facebook and is used majorly for Cross-platform app development. To achieve this react native uses JavaScript and share scores up to 70% of all platforms purchase Android and IOS. Coding using react native is quicker and more efficient. Its asset reduces the development time required to develop an app thus enabling companies to generate a minimum viable product without much effort.

Faster Development: React native Gets All Its Power from JavaScript. all the required code needed to run your app can be taken from web applications. Building iOS apps using react native is much faster than using swift, and can reduce the development efforts by up to 40%. Thus for an app that normally used to take about three months of development time will now take about one and half months.
Less Debugging: Using react native the amount that developers feed for work tracing and tracking requires much less effort on the part of the developers. It is easier to track and trace bugs as well as fix them using react native development.
Less Budgeting: you are able to lead and run the project using a small team of developers and designers who are efficient in using react-native. This ultimately reduces the overall cost of development.
Hot Reloading: Hot reloading enables developers to purely visualise the code that they are going to create. it enables developers to see the changes being rendered in a real-time basis without having to recompile the application.
Features expanding: React Native Developers are free to extend your existing app functionality and features using external extensive JavaScript models or custom JavaScript models.

App Store restrictions: If the react native app that you are created uses any libraries that dynamically update react native code, then app shows can reject it.
Lack of wrappers: In some cases, developers need to create and develop custom wrappers to provide the app with native models and components which can take some time to develop. This process is complex and can easily increase the development time and effort.