A robot sitting on the upper left corner(0,0) of a grid with r rows and c columns.
The robot can only move in two directions: right or down, but certain cells are “off-limits” such that the robot cannot step on them. Design an algorithm to find if there exists a path for the robot for reaching the bottom right from the top left.

The problem requires an understanding of Dynamic Programming. Read here… 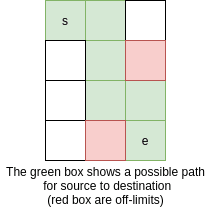 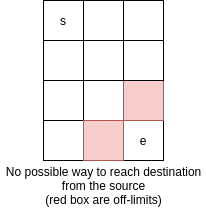 The first grid has many possible paths of reaching destination(e) form source(s) and one of them is shown using green. In the second grid, there is no possible path to reach the destination from the source.

Since the subproblems involve repetition, Dynamic Programming is used to speed up and reduce time complexity.

Implementation of above algorithm in CPP

In the above program, the dp[i][j] is used to store the values of subproblems. It is assigned -1, which tells that the current step/subproblem is not computed and -2, tells that it is invalid of the off-limit grid.

Techgig CodeGladiators 2021 is live now, Participate and prove your skills

How to Replace Loops using Recursion