A Load Balancers is a critical component in designing any distributed systems. Load Balancer does its magic by diving the traffic among a group of server thus resulting in improved response and availability of a website or application.

In a traditional client-server architecture, we used to have multiple clients trying to connect to one server. The problem with such architecture was if the traffic volume or number of requests increased then it increased the load on the server hence affecting the response time of the server. Also, there was only one server hence it was prone to failure i.e, it the server goes down, the entire application/website will be impacted. 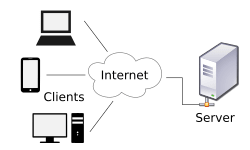 To overcome the problem with the traditional Client-Server architecture, Load Balancers are used. As discussed above, the load balancer works by distributing the high volume of incoming traffic among the group of available servers, hence making the distributed system fault-tolerant(i.e, by removing the single point of failure).

Load Balancers reside between the client and server, hence when a client makes a request to the server, the request is first received by the Load Balancers which then handles the request by routing it to a backend server. The server then responds directly to the client.

Do you code on weekends?