I work as CTO at a company that primarily uses Java and Python on the server and JavaScript on the client - besides some more exotic languages and the usual toolchain for app development. While using a rather conservative technology stack by day, I enjoy to look into different toolchains and technologies in my spare time. So, I decided to look into Elixir and Phoenix this time as part of my #100daysofcode and #learninpublic challenge.

I plan to do this as a series of post on dev.to covering all steps from setting up the project to deploying it on some PaaS platform. This won't be a detailed course of Elixir or Phoenix, but I will add links to more detailed references here and there.

Hopefully, in the end I fell in love with Elixir and Phoenix. The pure functional environment and scalability of the Elixir platform is intriguing.

I prefer to learn new technologies by implementing a real project or a product. It is fine for me to work through an excellent book like Programming Phoenix 1.4 and implement the learning project. But I only develop a deeper understanding when I have implemented my own ideas or something from a well-understood problem domain.

I love read-it-later services! Unfortunately, I have not found one that fully meets my requirements. And I tried all of them. So, this seems to be a good learning project. It also covers many nice aspects:

But we start as usual by installing the required tools and configuring the development project.

Set up the development environment

For macOS and Windows it is fairly easy to set up your development environment using a tool like Homebrew or Chocolatey. Just open a shell and run some simple commands. To follow this series you need Elixir, Phoenix, PostgreSQL and Node.js. (Node.js is required for the asset pipeline.)

Next up, we use mix the Elixir build tool to install the hex package manager and the current version of the phoenix framework.

Now everything is in place to start our shiny new project.

If you need more background on this. Check out the installation document on the Phoenix website.

Phoenix works just like all the other modern full-featured web frameworks when creating a new project - you run a command to scaffold your project. In case of Phoenix it is a mix task.

If your mind works a bit like mine does, you read over the sentence "Then configure your database in config/dev.exs and..." and just typed mix phx.server into your console window.

BAMM! You made the same mistake I always make and get some ugly database errors. Do yourself a favour, open the file config/dev.exs and change the settings for the development database connection.

In case of macOS and Homebrew the default user for PostgreSQL is your shell user with an empty password. In my case, it is oa.

Now you can run the following two commands. The first will create the development database with the name read_it_later_dev. The second will start the development server.

Now, start your browser and open the URL http://localhost:4000/. You should see the default start page of a fresh Phoenix project. 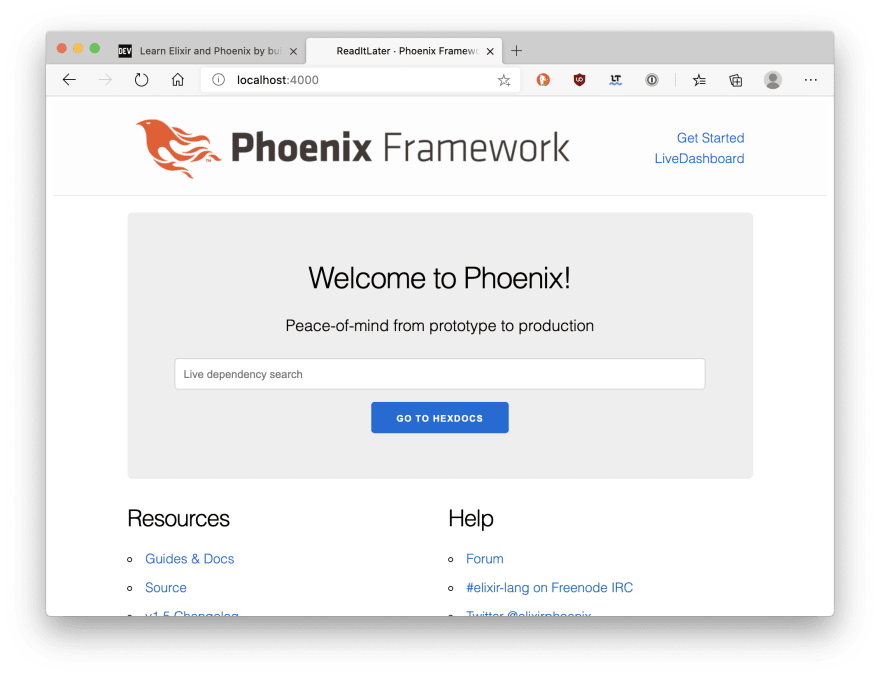 Anatomy of a Phoenix project

Let's finish up this post with a short overview of the directory structure and some important files.

I share the code to this project on github. Every post gets its own tag on the repository, so you can easily switch to the code of a given post.

This is the demo project from by blogpost series on dev.to.

Summary and next steps

So far, this was pretty straight forward but also somewhat boring. You now know what I am up to, and we created an initial project. I shared some insights I had during this early stage of my learning project.

Next up, I will add Tailwind CSS to the project because I love this utility-first CSS library. It is a great basis for a design system.

I hope you enjoyed this first post and will follow me on my journey learning Elixir and Phoenix.