This article was originally written by MJ Bahmani and posted on the Neptune blog.

Not really. If you're eager to find out what AutoML is and how it works, join me in this article. I'm going to show you auto-sklearn, a state-of-the-art and open-source AutoML framework.

To do this, I had to do some research:

As do AutoML research, and I've learned quite a lot so far. After reading this post, you'll know more about:

AutoML is a young field. The AutoML community wants to build an automated workflow that could take raw data as input, and produce a prediction automatically.

This automated workflow should automatically do preprocessing, model selection, hyperparameter tuning, and all other stages of the ML process. For example, take a look at the image below to see how Microsoft Azure uses AutoML.

What is AutoML: A conversation between Josh Starmer and Ioannis Tsamardinos

There are different types of AutoML frameworks, each has unique features. Each of them has automated a few steps of a full machine learning workflow, from pre-processing to model development. In this table, I summed up only a few of them that are worth mentioning: 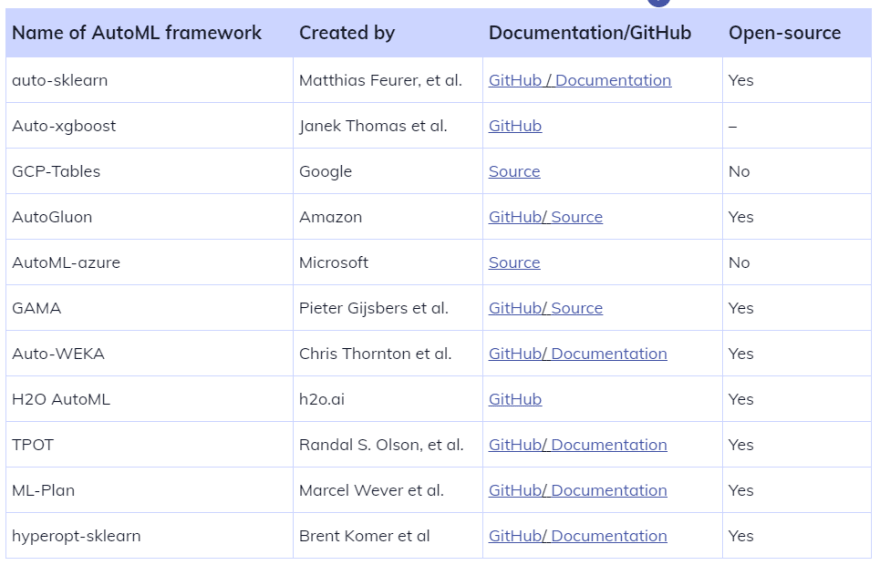 auto-sklearn is an AutoML framework on top of scikit-Learn. It's state of the art, and open-source.

auto-sklearn is based on defining AutoML as a CASH problem.

CASH = Combined Algorithm Selection and Hyperparameter optimization. Put simply, we want to find the best ML model and its hyperparameter for a dataset among a vast search space, including plenty of classifiers and a lot of hyperparameters. In the figure below, you can see a representation of auto-sklearn provided by its authors.

auto-sklearn can solve classification and regression problems. The first version of auto-sklearn was introduced with an article titled "Efficient and robust automated machine learning " in 2015, at the 28th International Conference on Neural Information Processing Systems. The second version was presented with the paper "auto-sklearn 2.0: The Next Generation" in 2020.

What can auto-sklearn do for users? It has several valuable features, helpful for both novices and experts.

By writing just five lines of Python code, beginners can see the prediction, and experts can boost their productivity. Here are some main features of auto-sklearn:

Auto-sklearn can solve classification and regression problems, but how? There's a lot that goes into a machine learning pipeline. In general, auto-sklearn V1 has three main components:

So when we want to apply a classification or regression on a new dataset, auto-sklearn starts by extracting its meta-feature to find the similarity of the new dataset to the knowledge base relying on meta-learning.

In the next step, when the search space shrinks enough through meta-learning, Bayesian optimization will try to find and select the out-performing ML pipelines. In the last step, auto-sklearn will build the ensemble model based on the best ML workflow in the search space.

Recently the second version of auto-sklearn went public. Let's review what's changed in the new generation. Based on the official blog post and original paper, there are four improvements:

Although Auto-sklearn might be able to find an outperforming pipeline without setting any parameters, there are some parameters that you can use to boost your productivity. To check all parameters visit the official page. 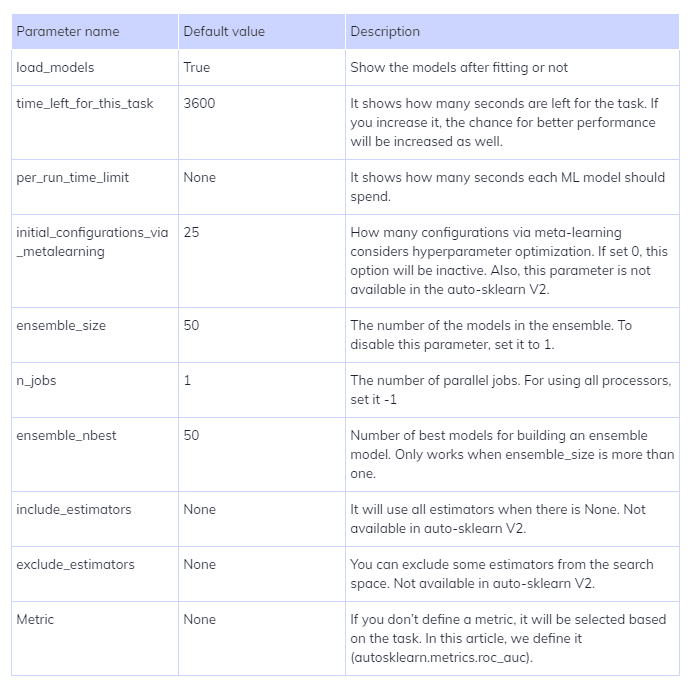 Now let's apply what we learned in a case-study, and perform some experiments!

I made some Notebooks which you can easily download and do the experiments on your own. But to do all the steps together again, you need to:

Check all the experiments in Neptune

First, you need to install auto-sklearn on your machine. Simply use pip3 for this:

If you get an error, you may need to install dependencies for that, so please check the official installation page. You can also use the notebooks I prepared for you in Neptune. Then run the following command to make sure the installation is done correctly:

For the classification problem, I chose a cherished Kaggle competition --- Santander Customer Transaction Prediction. Please download the dataset and select 10000 records randomly. Then follow the experiments in the first notebook:

We also need to define some configurations to gain more insight into auto-sklearn:

To use the above configuration, you could define the automl object as follows:

As I used plenty of different configurations, I just track them on the Neptune. You can see one of them in the image, and check all of them in Neptune.

When you fit the auto-sklearn model, you can check all the best outperforming pipelines with PipelineProfiler (pip install pipelineprofiler). To do that, you need to run the following code:

On the other hand, I also ran some experiments based on auto-sklearn V2. The result was fascinating. You can see the outcome below: 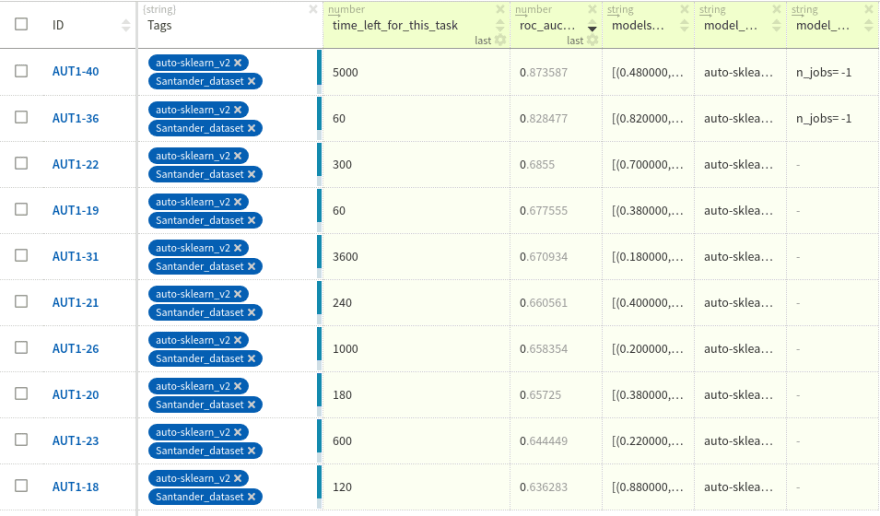 To use auto-sklearn V2, you can use following code:

The second type of problem which auto-sklearn can solve is regression. I ran some experiments based on the official example in the auto-sklearn documentation.

I just changed the time budget to track the performance based on the time limitation. The image below shows the results.

The most important advantage of this framework is that it saves a lot of time for experts. The one weakness is that it acts as a black box, and doesn't say anything about how to make a decision.

All in all, it's a pretty interesting tool, so it's worth giving auto-sklearn a look.

This article was originally written by MJ Bahmani and posted on the Neptune blog. You can find more in-depth articles for machine learning practitioners there.