I used the fbchat library for python to create an interface through which people can play the card game Fish(also known as Canadian Fish or Literature) through a Facebook Messenger group chat. The program takes commands through the messenger chat and can perform functions such as shuffling and dealing the cards to respective players(in private chats so players can't see each other's hands, in the picture they are shown all in one place for testing purposes), selecting random teams, and selecting teams by captains. 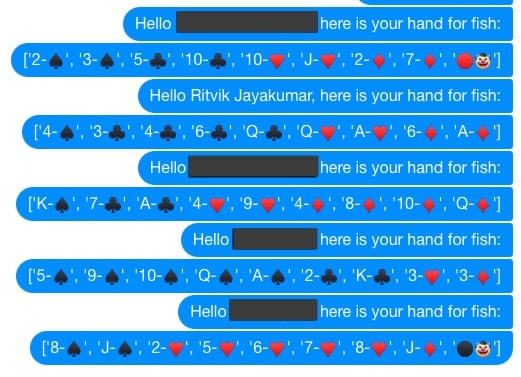 The actual gameplay is conducted through a call as playing through chat seemed to be more impersonal but I might implement playing through chat later on as it is easier, less time consuming, and eliminates error from players misrecording their hands. The project was inspired by the idea of playing the card game virtually during quarantine due to Covid-19.

Being a Humble Developer